Coal mines have caused environmental devastation to the Cesar department of Colombia. But now that the Swiss mining company Glencore announced that they will withdraw from the department, where they operate two mines, residents fear that the company will skip out on its legal obligations to the affected communities.

Boquerón is a small town on the plains of the northeastern Colombian department of Cesar, not far from the Venezuelan border. It can get so hot in Boquerón that you sweat standing still, and the streets are usually deserted around the middle of the day. Flower Arias told me about his childhood there, about how he used to be free to roam the plains, go for a swim, or go hunting.

That was when the cash crop was cotton and they had a “campesino culture,” of farming staples such as yuca and plantain, before multinational corporations dug five large-scale open-pit coal mines in the area surrounding Boquerón, changing the region forever.

“Sickness, environmental contamination, robberies, sexual violence, these are the memories that the mines are going to leave,” Arias said.

On February 4, one of the three multinational corporations, Prodeco (a subsidiary of the Swiss mining giant Glencore), announced they were returning their mining contracts to the Colombian government and halting operations in Colombia. The company said the low price for coal has made their operations “economically unviable.” Many living in Cesar’s mining corridor are uneasy, as it isn’t clear who will assume the responsibility of Prodeco’s environmental and social liabilities or what will replace this source of employment and royalties for local governments.

“The country runs the risk that this company will leave without having given a plan to close the mine, which is mandatory, and without resolving the social and environmental problems that it generated during its time here, as communities and organizations have denounced for years,” read a communiqué signed by dozens of Colombian civil society organizations and Colombian Lawmakers.

“The company has to respond for everything it has done wrong,” he said. “From this point of view, they haven’t fulfilled anything. They need to take care of their environmental liabilities.”

Cesar’s mining corridor consists of the municipalities of Agustín Codazzi, Becerril, El Paso, and La Jagua de Ibirico. The region produced just over 52 million metric tons of coal in 2019, accounting for 61% of Colombia’s production. Colombia exported 88% of the coal it produced that year, with Turkey buying the most.

Prodeco has five mining titles across two mines, La Jagua and Calenturitas, which have been operating since 2004. Those two mines produced about 30% of Cesar’s coal in 2019, providing $206 million in royalties and taxes for the Colombian state.

Colombia’s National Mining Agency is responsible for awarding mining concessions. This can, for example, grant a company such as Prodeco the right to exploit a certain mineral for a certain amount of time; the Autoridad Nacional de Licencias Ambientales (National Environmental Licensing Authority, ANLA) must give its approval, taking into account environmental and social standards.

While the option for companies to renounce their concessions has always existed, this is the first time a multinational corporation has done so in Colombia. To sort through all the financial, environmental, and social liabilities Prodeco may or may not have, the Colombian State has appointed an “inter-institutional commission.”

“I don’t know how the state is going to accept the return of those mining titles because they have a lot of responsibility,” Arias said. 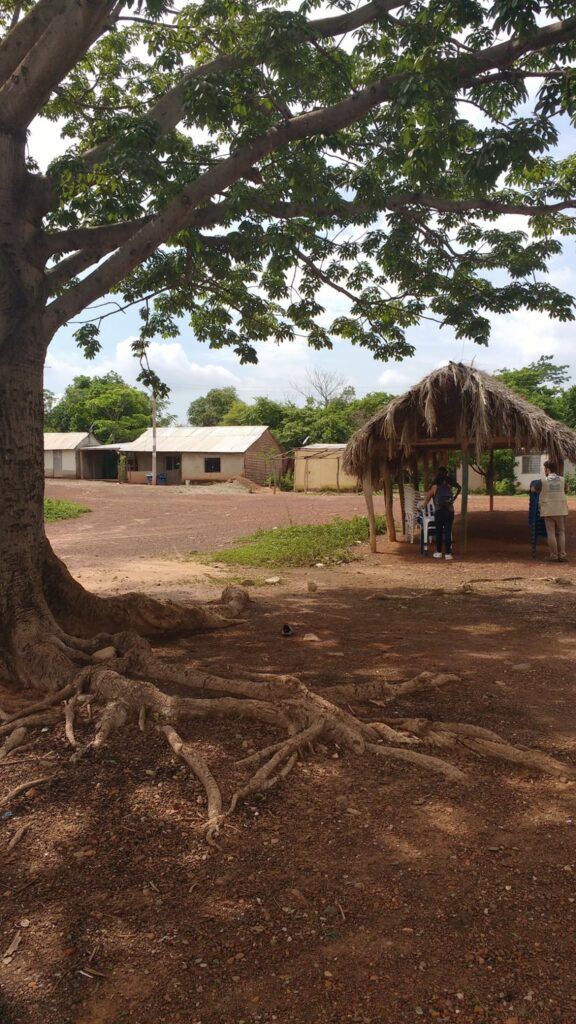 One notable liability Prodeco has is its responsibility for the involuntary resettlement of three Colombian villages: Boquerón, where Arias is from, as well as El Hatillo and Plan Bonito.

In 2010, the Colombian Ministry of Environment ordered the three multinational companies, Drummond, Prodeco, and Colombian Natural Resources (CNR), to resettle these communities because of dangerous air contamination caused by mining. The order said the resettlement had to be finished by 2012.

However, neither El Hatillo or Boquerón were resettled by the deadline. After drawn-out negotiations that lasted six years, the companies agreed to the Resettlement Action Plan for El Hatillo in 2018.

“For those living in the area, mining and agro industry have been responsible not only for changes in the use of the land, but also for air pollution and water pollution that have come with them,” said the organization Pensamiento y Acción Social (Social Thought and Action, PAS) in a written statement. “During the six years of negotiation, the companies used diverse strategies to wear out the community and its leaders, generate uncertainty, and break the communitarian social fabric.”

Yolima Parra,  a community leader from El Hatillo, said the announcement that Prodeco is leaving has generated uncertainty and had a big impact on the people living there.

“We are suffering a humanitarian crisis due to unemployment and food scarcity,” Parra said. “No family has a stable source of employment or a way to get resources to feed themselves.”

In the municipality of El Paso, where El Hatillo is located, 21% of those living in rural zones had unmet basic needs in 2018, according to the Colombia’s National Administrative Department of Statistics (DANE). This number jumps to 35% in La Jagua de Ibirico, where Boquerón is located, and 34% and 67%, respectively, in Agustín Codazzi and Becerril, the other two municipalities of the mining corridor.

Further complicating El Hatillo’s resettlement is that another of the three companies, CNR, declared bankruptcy in late 2020 and says they won’t be able to meet their resettlement obligations.

Parra says the only company that has been transparent as to what’s going on with the resettlement has been Drummond.

“Prodeco, we don’t have a lot of communication with them, only once because we demanded it,” Parra said.

He added that CNR has been similarly evasive.

According to a statement from Prodeco, however, they are committed to ensuring a sustainable and just transition for Colombia and surrounding communities.

“The decision to relinquish the mining contracts has not been taken lightly and is a disappointing outcome,” the company said in its February 4 statement.

The company also said they had invested $3 billion in the communities and had paid another $3 billion in royalties over the course of their operations. They claim they “will support our employees, contractors and neighboring communities in relation to the impact derived from the relinquishment of mining titles and the subsequent stages of the process.”

Prodeco did not return requests for an interview.

As for Boquerón, on February 2, 2021 the Environmental Ministry reclassified the area as not having high enough levels of air contamination to justify a resettlement. Local officials have reportedly committed to improve living conditions in Boquerón.

Arias, who grew up in Boquerón but now lives in the Department’s capital Valledupar, asserts that the mining companies still have an obligation to resettle the community, because while the Environmental Ministry has issued a resolution removing Boquerón from the area of contamination, the ANLA has not yet reversed the original order. The resolution to resettle the community is still in force. Arias is the legal representative of Boquerón’s Community Council, a special Colombian legal framework that affords Afro-Colombian communities a degree of territorial autonomy.

“Colombia’s constitution says you have a right to a safe environment, and to guaranteed healthcare, drinking water, education, but here some local authorities don’t do anything,” Arias said.

In March, nine Colombian lawmakers  created a commission in the Colombian Congress “to monitor and verify large-scale coal mining in the Colombian Caribbean,” to oversee environmental, healthcare, labor, economic, judicial, and social and cultural issues in Cesar and La Guajira, another major coal-producing department.

“It isn’t only [communities being resettled] that have been impacted, the whole mining corridor of Cesar has been affected, but people only focus on the resettlements,” said Ana Rivera, a member of Boquerón’s community council who lives in the urban center of La Jagua de Ibirico. “That’s to say Becerril, La Jagua, in the rural parts, they all have felt an impact.”

Rivera spoke specifically to the precarious access to water.

“We have an aqueduct, but water only comes out of the taps every three, four or five days,” she said. “The water is OK for cleaning, washing dishes, even for cooking if you treat it a bit. But for drinking, you have to buy it.”

One of the biggest impacts on the water system in the region was the diversion of the Calenturitas River, approved by Colombia’s environmental authority in 2009. This river was vital for the economy of the region, including El Hatillo, providing fish and other necessary resources.

“The biggest damage was the diversion of the river, because it had provided economic stability for the community,” Parra said.

In 2018, the National Comptroller released a report about the mining licenses in Cesar, finding a series of administrative and criminal violations of regional and national environmental authorities, including that rivers were diverted without the sufficient studies having been done.

“It should be noted that the pressure on natural resources from mining operations in the [central area of Cesar] has increased over the years, affecting or influencing the quality and quantity of water resources, loss of biodiversity, changes in land use, air quality (source area of pollution in the [Central Area of Cesar]), changes in geoforms, loss of ecosystem services and changes in social dynamics, including resettlement processes,” the report reads.

Aside from environmental and social damages, Prodeco has been implicated in funding paramilitary groups. Allegations of Prodeco funding these groups go back decades, and in February a documentary released by Deutsche Welle interviewed a demobilized paramilitary soldier who alleged complicity with mining companies operating in Cesar.

Drummond points to the lack of judicial sanctions as exculpatory, pointing out, “Drummond has prevailed in every case filed against it in the US based on allegations of collaboration with paramilitaries.”

However, in December 2020 the Colombian Public Prosecutor’s office accused the current and former presidents of Drummond in Colombia of having financed paramilitaries. That case is still in court.

Meanwhile, people who live in the mining corridor continue to suffer violence. In 2016, the negotiations between the mining companies and the community were getting progressively more tense, as they were approaching structural aspects of the resettlement such as access to land and housing. According to PAS, “at night they began to see armed men dressed in black… patrolling the streets close to the houses [of the leaders of the community].”

On January 7, 2017, the nephew of the president of the Communal Action Board (a figure that allows rural communities to organize themselves) was assassinated. The local human rights authority had warned that community leaders were at risk.

Leaders like Flower Arias and Yolima Parra are continuing to advocate for their communities and navigate a difficult set of relationships just to survive. What Arias and Parra are demanding is that Prodeco assume its social and environmental responsibilities after two decades of extracting wealth and coal from the area.

Thomas Power is a candidate for a master’s degree in Estudios Políticos (Political Studies) in the Universidad Nacional de Colombia (Universidad Nacional of Colombia) and was an International Human Rights Accompanier with Fellowship of Reconciliation from 2016-2018, where he continues to collaborate. He tweets at @ahbueno55

A Day on a New York City “Rocket Docket”