The remains of the Deslouches' house in Port-au-Prince, Haiti. 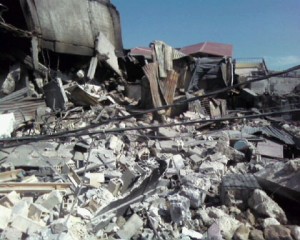 The remains of the Deslouches' house in Port-au-Prince, Haiti.

NEW YORK — Like so many Haitian-Americans, Samira Louis and her family eagerly awaited news of relatives in Haiti in the wake of the Jan. 12 earthquake. Within hours, the Louises were saddened to learn that the sturdy house in which her father had grown up in Port-au-Prince had collapsed to the ground.

When they later learned that her aunt and uncle were on the second floor when the house crumbled, their sadness quickly changed to devastation.

“We heard that everyone was downstairs watching TV when they felt a shake,” said Louis, 23, of East Orange, N.J. “My uncle Gaston and my cousins ran out of the house, but my aunt was still on the second floor.”

By the time Gaston Deslouches reached his wife, Adeline, it was too late; the entire structure fell to the ground while they were still inside. Louis and her family tried frantically to regain communication with their aunt and uncle, but were unable to get any information.

“We all thought that they were dead,” Louis said. “We had no idea what was going on because there was no communication, so my parents decided to fly to Haiti and find out.” 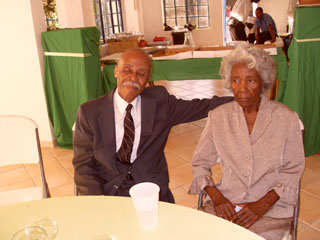 Just as Louis’ parents arrived in the Dominican Republic, en route to Haiti two days after the quake, they got word that Deslouches and his wife had been rescued from beneath the debris and were safe. Deslouches, a Haitian-born Yale graduate and retired doctor, had returned to Port-au-Prince in order to provide medical care to the underprivileged.

Louis’ parents, Marie-Lucie and Nikolai R. Louis Sr., flew to Haiti with only a carry-on bag of medical supplies and $200.

“They thought, ‘Maybe we should wait. Maybe we should go when everything is settled,’ ” Louis said. “But one thing about Haitian people is, no matter what our differences are, we always stick together. Even if the situation is dangerous.”

Her parents told her that because there is so little food, communities pool resources and cook one pot of food for everyone to share for the day, but there is never enough to go around.

“It’s hard for my parents and the other volunteers because they feel like they aren’t the ones who should be eating,” Louis said. “They are in full survival mode — everyone is.” 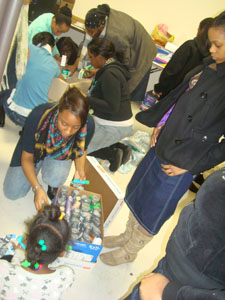 Despite the overwhelming sense of worry surrounding the events in Haiti, Louis’s first instinct was to become involved with the relief effort.

“When I actually realized the gravity of the situation, my initial thought was, ‘What can I do to help?’ ” Louis said.

She decided to work with friends to create a donation plan of her own.

“Immediately after the earthquake, I was on conference calls with friends, working to contribute,” Louis said. “We reached out to the largest Haitian church in the area and organized a drop-off box where community members could donate supplies.”

The plan was a success. After two days, enough supplies had been collected to fill two church vans, and were delivered to the Charity Waters, a non-profit organization in New York. The donations were then flown directly to Haiti.

Countless New Yorkers who are not directly affected by the disaster in Haiti have taken the initiative to participate in relief efforts as well. Tyler Fischer, 22, of Fort Greene, was wary of text message donations and chose to contribute in other ways.

“I’ve been going to restaurants and events that will donate their profits to various charities,” Fischer said. “I’m donating the same amount as I would via text, but am able to feel like I’m participating in something.”

Colombian Paramilitaries Extradited To U.S., Where Cases Are Sealed

Deaths and Desperation Mount in Ecuador, Epicenter of Coronavirus Pandemic in Latin America