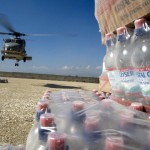 Top Story —  Switzerland froze approximately $4.6 million from the family of former Haitian leader Jean-Claude “Baby Doc” Duvalier that was held in Swiss banks. The Haitian government has demanded the money since 1986, saying that Duvalier pilfered the it during his years in power.

The Swiss Supreme Court overruled an earlier decision to send the money to aid groups in Haiti. The Supreme Court ruled on Jan. 11 — just one day before the earthquake that devastated the Haitian capital Port-au-Prince — but the decision was not made public until Wednesday. It was shortly after reported by the Wall Street Journal.

The Swiss government is searching for a way to pass legislation allowing the funds to be returned to the Haitian government.

“We assume this money doesn’t belong to the Duvalier family,” said Swiss Justice Minister Eveline Widmer-Sclumpf, according to UPI, “We have blocked the money again today to prevent it from going somewhere that it shouldn’t for political reasons. We hope this money finally goes back to the country.”

I also invite you to my page on the same topic, the link is below