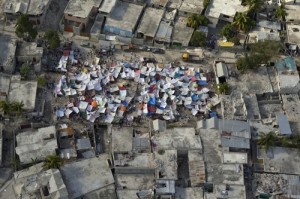 Tents erected in Port-au-Prince after the Jan. 12 earthquake

Top Story — A study released by the Inter-American Development Bank (IADB) Tuesday says that the damage from last month’s earthquake in Haiti could have caused billions of dollars more damage than expected.

Estimates for the damage were originally around $5 billion, but the new study estimates the cost could be anywhere from $7.2 billion to $13.2 billion. Part of the reason for this rise in cost was that death toll estimates went from 200,000 to around 250,000.

The damage from the earthquake could be more destructive than that from the Asian tsunami in 2004 or the cyclone that ravaged Myanmar in 2008. However, the rebuilding costs in Haiti will be significantly lower than those after Hurricane Katrina, according to the report.

“While a detailed assessment of needs will come from the so-called Post Disaster Needs Assessment that will be conducted in the coming months, the estimates above indicate that Haiti’s needs will run into several billions of dollars,” said the report, written by Eduardo A. Cavallo, Andrew Powell and Oscar Becerra.

The United Nations, the World Bank as well as the IADB have already begun working on the more detailed estimate of the earthquake’s damage, but this initial report states that Haiti, already the Western Hemisphere’s poorest country, is likely to face a stunted economy for years to come.

[…] he would make a formal offer to Venezuela, even though Venezuela said earlier this week that it was not interested in Colombia’s […]