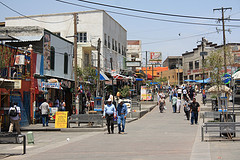 Valles said he was directed by a gang leader to identify the vehicle of Arthur Redelfs, one of the victims. Valles says he followed Redelfs’ car, and then backed away when gang members opened fire, killing Redelfs and his wife Lesley Enriquez.

The third victim, Jorge Alberto Salcido, drove an SUV similar to Redelfs’ and was killed after leaving the same birthday party.

The motive of the murders is not yet clear. The BBC reported that investigators believed that the killings may have been retaliatory, since one of the victims worked in a U.S. prison where gang members are jailed.

A statement from El Paso County Sheriff Richard Wiles, however, said “is our understanding from our counterparts in the FBI there is no evidence to support the theory that any of the three victims were specifically targeted.” Wiles called Valles a “career criminal” whose credibility was open question.

Valles was arrested this weekend by the Mexican military, along with other alleged gang members suspected of involvement in the consulate murders.

[…] connections to the U.S. Consulate in Ciudad Juárez. The killings, allegedly carried out by one of Mexico’s notorious drug gangs, prompted analysts to wonder if the U.S. was being […]