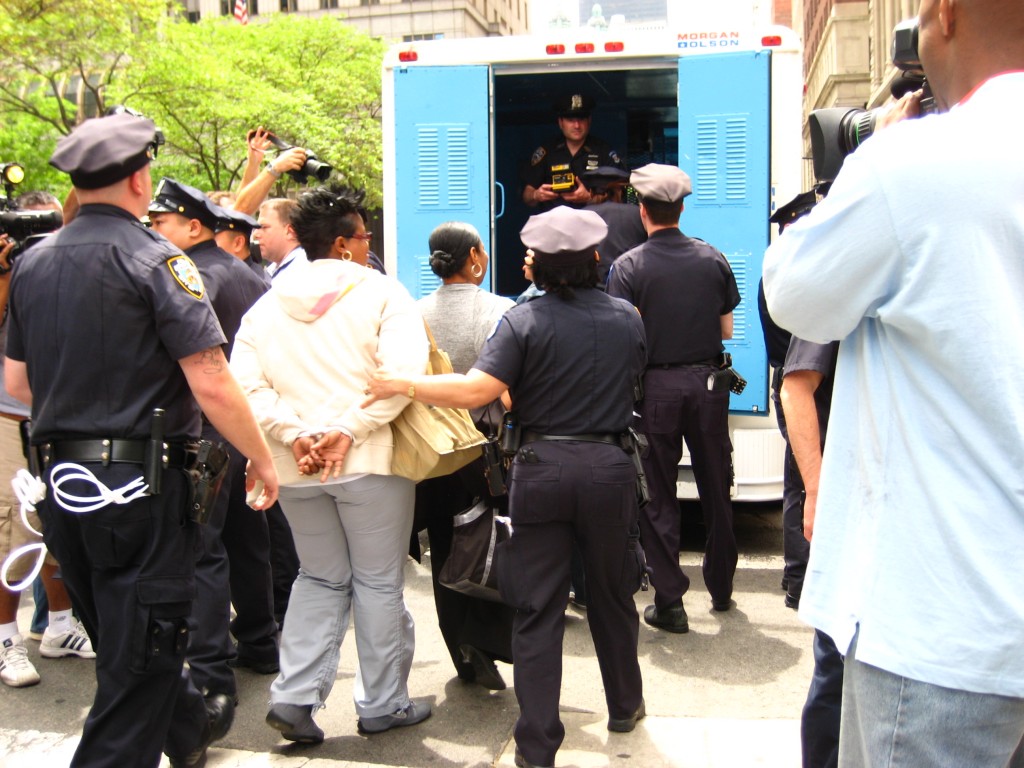 NEW YORK — After forming a human chain and blocking traffic near a federal building, 16 people were arrested Monday in downtown Manhattan.

Also arrested were Deycy Avitia, director of advocacy and organizing for the New York Immigration Coalition, and Lisa Sharon Harper, the executive director of New York Faith and Justice, who Tweeted about her experience.

Norman Eng, spokesperson for the New York Immigration Coalition, said the arrests were a pre-planned show of civil disobedience intended to pressure Congress to enact comprehensive immigration reform this year.

“We haven’t seen any action,” he said. “The message here is, we’re going to keep on pushing and pressing for reform until it happens.”

The arrests took place after about 100 people protested by 26 Federal Plaza, criticizing the Arizona law and deportations under President Barack Obama’s administration.

Eng said the noon protest lasted for nearly an hour before people who volunteered for the act of civil disobedience walked onto Broadway and blocked traffic for 15 minutes.

After issuing them a warning, the police arrested the 16, who were later released in the late afternoon.

“All in all, it was orderly and peaceful, and the police were very professional,” Eng said. “But it was very powerful.”

After similar rallies in March and May, Eng said the arrests were intended to be “an escalation in tactics” when previous protests didn’t garner the desired attention and action.

Organizers of the “Uncover the Truth” campaign, which seeks more information about police and Immigration and Customs Enforcement community collaboration, led a phone “teach-in” for community activists.

Leaders from groups like the National Immigration Project and the National Day Laborer Organizing Network told callers about programs like 287(g), which deputizes local officers, and instructed how to find whether police work alongside ICE and what to ask local officials.

The campaign started in April to demand answers about the local police working with ICE. Understanding programs like 287(g) and Secure Communities, another federal-local partnership, and working through the layers of federal, state and local enforcement can be frustrating, said many on the call.

Cuba Travel Legislation Vote Postponed; Not Likely To Be Taken Up Until After Midterm Elections

[…] Read about the 16 people arrested in New York for acts of civil disobedience while protesting for comprehensive immigration reform at Alison Bowen’s blog Beyond Borders. […]