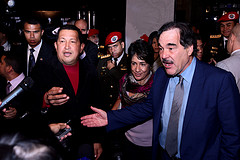 Venezuelan President Hugo Chávez and director Oliver Stone at the Venezuela premiere of "South of the Border" last week.

Top Story — Oliver Stone spoke at the Buenos Aires School of Law Thursday, as part of a trip to promote his new film “South of the Border.” The film is based on interviews with Cuban head of state Raúl Castro and the presidents of Venezuela, Bolivia, Argentina, Brazil, Ecuador and Paraguay.

At the talk on Thursday, Stone praised former president of Argentina Néstor Kirchner and his wife, current president Cristina Fernández de Kirchner, saying they were “much more liberal” than Bill and Hillary Clinton, according to Spanish news wire EFE.

Stone has been in South America since last week, visiting Venezuela, Ecuador, Brazil, Bolivia and Paraguay, as well as Argentina.

Stone openly sympathizes with the region’s left-wing leadership and has also made a documentary called “Comandante” in 2003, which was based on a series of conversations with Cuban leader Fidel Castro. Stone directed a second documentary about Cuba called “Looking for Fidel” the following year.

“He shouldn’t be on television all the time,” Stone said at a press conference last Friday, according to The Associated Press. “As a director I say you don’t want to be overpowering. And I think he is sometimes that way.”

Stone will discuss “South of the Border” in Washington at a meeting of the National Press Club on June 23, along with screenwriters Tariq Ali and Mark Weisbrot, according to UPI.