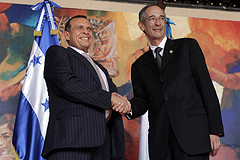 Honduran President Porfirio Lobo shaking hands with Guatemalan President Álvaro Colom at a meeting in May.

Top Story — A year after the coup that overthrew Honduran President Manuel Zelaya, Latin American countries are beginning to recognize the new government in larger numbers.

The Chilean government announced Friday that it would normalize diplomatic relations with Honduras, which were suspended following the coup last June. Mexico’s Ministry of Foreign Relations said a day later that it would also send its ambassador back to Honduras.

Both countries said they based their decision in part on the findings of a report released Thursday by the Organization of American States (OAS) that said Honduras had made progress toward resolving problems caused by the coup.

The report was ordered in June, when the OAS took up the issue over whether or not to readmit Honduras at a meeting in Lima, Peru.

Honduras was expelled from the regional body following the coup, on the grounds that member nations must have democratic governments and respect the rule of law. Eleven countries throughout the hemisphere (including Mexico and Chile), however, have since reestablished diplomatic relations with Honduras.

But while Mexico and Chile’s announcements lend increasing legitimacy to the new government in Honduras, other countries — particularly the left-leaning governments of South America — remain opposed to normalizing relations.

In an interview with the OAS commission referred to in the recent report (.doc), Ecuadorian President Rafael Correa said his administration would refuse to recognize the Honduran government as long as the coup leaders continued to enjoy impunity for overthrowing the government and for alleged human rights abuses.

Last week’s report and the changes in policy it prompted will surely raise Honduras’ status before the OAS again in the near future.

Secretary of State Hillary Clinton called for Honduras’ return at the OAS in Peru. “President (Porfirio) Lobo has done everything he said he would do,” Clinton told reporters. “He has been very committed to pursuing a policy of reintegration.”

Clinton’s urging represented a softening of the OAS position adopted in the weeks following the coup. The OAS resolution that condemned the coup (.doc) and preceded Honduras’ suspension called for Zelaya’s restitution and said that “no government arising from this unconstitutional government will be recognized.”

Zelaya currently lives in exile in the Dominican Republic.

Other top news: Venezuelan President Hugo Chávez sent troops to the Colombian border on Friday, as relations between the two country continue to worsen. Colombian President Álvaro Uribe said that his country had no intention of attacking Venezuela. An emergency meeting of Unasur, a regional body of South American governments, failed to resolve the diplomatic dispute last week.