The city of Phoenix, Arizona. 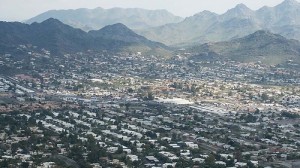 The city of Phoenix, Arizona.

PHOENIX —  The sun glared off the polished wood of a conference table in downtown Phoenix, but U.S. Attorney Dennis Burke — who was also at the table during SB1070’s court hearing as part of the Department of Justice — had a much cooler attitude than Senator Pearce towards what he described as the politicization of the challenges faced by the U.S. and Mexico.

Burke cited the outcry after Mexican President Felipe Calderón’s unprecedentedly critical address to a joint session of Congress in May, where Calderón called SB1070 a “threat to civil rights and democracy” and said immigration reform was “crucial to securing our common border,” as an example of this politicization. (Arizona State Sen. and author of SB1070 Russell Pearce called it “treasonous.”)

“The debate and the dialogue has gotten so skewed, by talk, and T.V., and people not willing to drill down and realize what exactly Mexico is trying to do at this time,” said Burke, an arm casually over the back of a neighboring leather office chair, but his bright-blue eyes intense. “Mexico has a lot of issues: widespread public corruption, issues with rule of law – a long ways to go, but here’s the first president of Mexico who said from day one, ‘I have to take on the drug cartels,’ and the American public’s criticizing him for his comments about a state law?”

Burke, a Democrat, worked on the Obama-Biden transition team. Currently, he serves in an advisory capacity to both Attorney General Eric Holder — also as chair of the Subcommittee on Border and Immigration Law Enforcement — and Homeland Security Secretary Napolitano, for whom he was chief of staff when Napolitano was governor of Arizona.

According to Burke and recent reports from the FBI and Customs and Border Protection (CBP), the violence in the border regions described by Pearce, along with the general homicide rate for the state, have in reality both decreased.

“If you’re a trafficker, running a drop house, it’s a very violent business, very dangerous business — crime rate for them? Very, very high,” said Burke. “But in the state, crime is actually down. There are no beheadings. There is a major disconnect between the political dialogue in Arizona and the reality of crime rates.”

According to a report released by The Associated Press in June analyzing a number of government data, of America’s 25 largest cities, the four with the lowest rates of violent crime are all in the border region: San Diego (where one in four residents is an immigrant), Phoenix, El Paso and Austin. A CBP report received through the Freedom of Information Act showed that Border Patrol agents encounter less danger (almost ¼ less) than local police in a majority of U.S. cities. In 2009, violent attacks against agents — mainly thrown rocks — declined along a majority of the border for the first time in seven years. 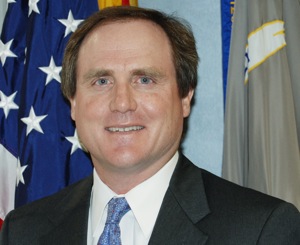 U.S. Attorney Dennis Burke of the Department of Justice. Image by U.S. government.

In Arizona, says Burke, human and drug traffickers and migrants seek to take advantage of the state’s accessible highway infrastructure — for miles along 8 East, a major highway running East-West along the border from San Diego through Arizona, the fence is visible — and hundreds of miles of desert terrain that, though harsh, provides cover. But despite these advantages for border crossings and the rhetoric coming out of Arizona daily, its crime rate and homicide rate have actually both declined over the past decade to their lowest points, according to the FBI report.

And though politicians like Pearce claim that legislation such as SB1070 is needed in the absence of the federal government enforcing existing laws, Patrick “Wyn” Hornbuckle of the Department of Justice preceded the interview with Burke by handing over the “Border Security Fact Sheet” for Arizona, which cited statistics that contradict these claims: 99 percent increase in drug filings since 2008. 3,200 felony and 22,000 misdemeanor illegal immigration cases filed in 2009. Bulk currency exportation cases up 236 percent in FY 2010, representing more than $3 million.

According to Burke, this has to do both with the federal government’s increased investment in resources to investigate and prosecute border-related crimes and also improvements made within Mexico. This has allowed his office to adopt a new priority — and technique — in the struggle to improve security.

“A major priority for us, from our perspective, is not the drugs and humans heading north, but the guns and money heading south,” says Burke. “What we do now, that we have not done in the past, is very robust, stringent, south-bound inspections for arms trafficking, bulk cash smuggling, which fuels the drug cartels — they’re all driven by greed and green backs, not people trying to be here illegally.”

Immigration may be a bigger blip on the public agenda today. But Burke believes placing its burden on law enforcement and the justice system is unsustainable and unrealistic for a situation he describes as largely economic. He illustrated with this example: the U.S. provides the same amount of visas to the Dominican Republic, a country of over 9 million, as it does to Mexico, a country of over 110 million.

“Congress blew it a few years back and kicked the can down the road,” said Burke, with typical candor. “Pass comprehensive immigration reform. We have an anachronistic, archaic immigration system in the U.S. that doesn’t reflect economic reality — we put the burden on criminal justice system, when we need more focus on the secretary of labor than the attorney general.”

Along with the U.S. doing its part to limit “guns and greenbacks” headed the opposite direction over the border, Burke also has a unique approach to the well-worn phrase “securing the border” — trust, and train, Mexican authorities.

“My perspective is you could move the border into Mexico, if you are teaching and training and empowering Mexican prosecutors to prosecute Mexican drug traffickers in Mexico, with their own people, own laws, own country,” says Burke. “Move the border further south than north.”

This article is the second in a three-part series examining the immigration debate in Arizona. See part one here and part three here.

Every Non-representative including obama and holder need to be IMPEACHED! for not upholding the oath of office they swore to defend the Constitution! If these clowns were to do their job, this would all be a Moot point!

Thanks for this post. It seems to me that coming up with a realistic and enforceable immigration policy that allows workers from Mexico to easily get working papers would help with much of the problems we’re seeing in the US border states.