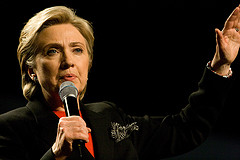 Top Story — U.S. Secretary of State Hillary Clinton and other dignitaries from throughout Latin America began a meeting of the Organization of American States (OAS) Sunday in Peru.

Besides stopping in Peru for the meeting, Clinton also plans to visit Ecuador, Colombia and Barbados.

One of the main underlying tensions at the OAS meeting will be the question of whether to allow Honduras back into the organization, after it was ousted following that usurped then-President Manuel Zelaya. After the election of current Honduran President Porfirio Lobo, Clinton said the Obama administration favors permitting Honduras back into the OAS.

“President Lobo has done everything he has said he would do,” Clinton told reporters Sunday, according to The Associated Press. “He has been very committed to pursuing a policy of reintegration.”

Clinton will face opposition to her stance on Honduras, especially from Brazil, Venezuela and Nicaragua.

Ties have recently been strained between the U.S. and Brazil, especially concerning the issue of Iran. The Obama administration said it hopes to put to a U.N. Security Council vote this week the idea of more sanctions on Iran, while Brazil would like more time for diplomacy.

The Obama administration has faced some difficulties in Latin America as the early promises close cooperation, easing treatment toward Cuba and immigration reform have not yet materialized.

“The expectations in the region ran way ahead of reality and there is a certain disappointment and cynicism that has set it,” said Eric Farnsworth, vice president of the Washington, D.C.-based Council of the Americas, according to Reuters.

Along with easing tensions between Latin American and the U.S, Clinton’s four day trip will also include talks in Ecuadorean President Rafael Correa and outgoing Colombian President Álvaro Uribe about trade agreements and drug-trafficking.

[…] Secretary of State Hillary Clinton called for Honduras’ return at the OAS in Peru. “President (Porfirio) Lobo has done everything he said he would do,” Clinton told reporters. “He has been very committed to pursuing a policy of reintegration.” […]