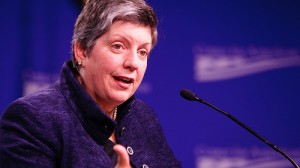 The Immigration and Customs Enforcement Agency (ICE) deported 392,862 people in fiscal year 2010. Criminal deportations jumped to 195,772 persons in 2010, while non-criminal cases dropped to 197,090. The numbers amount to a 70 percent increase since the Bush administration, Janet Napolitano of DHS said during a press briefing last Wednesday.

“Unfortunately, in immigration families do get separated, if and when Congress takes up immigration reform, that will be one of the issues that they undoubtedly have to consider,” Napolitano said.

Napolitano attributed the deportation increases to the implementation of the Secure Communities program, which she said will extend to all law enforcement jurisdictions by 2013.

Secure Communities is a federal information gathering program that uses biometric identification, such as finger prints, to determine the immigration status of someone in custody.

During a later briefing with Hispanic media, John T. Morton, assistant secretary of ICE, added that the department expects an expansion of 900 jurisdictions for next year.

While police jurisdictions can’t opt out of the program, Morton said the Department invites investigations for specific complaints.

“We do prioritize our efforts based on level of offense. Over three quarters were convicted of level one or two offenses,” said Morton.

Pablo Alvarado, director of the National Day Laborer Organizing Network, released a statement discrediting the release of DHS’s immigration data as a political strategy before the midterm election.

“Broken immigration laws should not be multiplied. In an effort to score political points, Obama Administration immigration enforcement initiatives have imperiled community safety, separated families, eroded hard-earned civil rights protections, and created a domestic human rights crisis. This administration cannot continue to have it both ways: it can not simply blame Congress for inaction while ramping up enforcement of unjust status quo laws. It is a travesty that Secretary Napolitano continues to use her home state of Arizona as a blueprint for DHS policy.”

“It has been top priority in this administration and the only reason we haven’t got it done is because we’ve had no Republican cooperation,” Munoz said, while stressing that the administration will continue to support a bi-partisan proposal after the midterm elections.

Chilean Miners Expected To Be Rescued On Wednesday; Arguing Over Who Will Go Last

[…] Criminal deportations have reached a record high under the Obama Administration. Raisa Camargo reports from Washington. […]