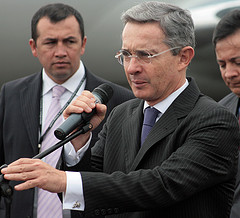 Former Colombian President Álvaro Uribe signed the deal last year and it would permit the U.S. to use the bases to help with operations against drug trafficking and terrorism.

However, the court said that the joint agreement was “an arrangement which requires the State to take on new obligations as well as an extension of previous ones” and that it should be an “international treaty subject to congressional approval,” according to the United Kingdom’s Telegraph newspaper.

“The Constitutional Court of Colombia … resolves to refer to the president the supplementary agreement for cooperation and technical assistance in defense and security between the governments of Colombia and the United States,” the court said, according to Reuters.

The deal, signed last October, would give the U.S. access to Colombian bases for 10 years and could see a total of 800 U.S. military personnel and 600 civilian defense contractors based in the South American nation.

The U.S., which since 2000 has given Colombia over $7 billion in aid, needed a new regional center of operations after Ecuador refused to resign a lease it had with the U.S.

The deal has been heavily criticized throughout the region and has been a point of contention between Colombia and Venezuela, who have recently renewed diplomatic relations.

Oil Prospects in Cuba Have Some Rethinking U.S. Trade Embargo