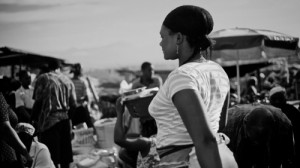 PORT-AU-PRINCE — When Shirley leaves her tent in the steep hills of Canapé Vert, she lies to preserve her dignity. As she goes, she tells her 14-year-old son that she works the late-night shift at restaurant nearby. Some nights, she does not return until 5 a.m.

She takes a rickety tap-tap taxi over the spottily paved roads in Port-au-Prince, sometimes landing in the wealthier neighborhood of Pétionville, other nights in the gritty working class zone of Carrefour. She sells her last marketable commodity—her body—and might receive $25 U.S. from a client. She might also get arrested or abused or stabbed. Since the quake, competition among prostitutes has gotten fiercer and, on occasion, the most vicious women wield razors to fend off the others.

Shirley is 38 and wears a sprig of a ponytail and small bluish bags just beneath her eyes. She had thought she left sex work behind, after several years ago she met the executive director at ANAPFEH, a grassroots Haitian group working to help women engaged in sex work.

Through the organization she acquired a loan of about $1,000 and enrolled in a week-long entrepreneurs’ course. Soon, she was traveling the long road to the Dominican Republic, buying cases of inexpensive cosmetics, and then returning to Port-au-Prince to peddle her wares from salon to salon.

She had a different look back then—more regal. She became a peer advocate at the organization, mentoring others.

Then January’s earthquake hit. Shirley lost her home and her stock of cosmetics. Her two kids, Bellanov, 14, and Karis, 4, got sick, and she lost her savings. ANAPFEH had no funding for another loan.

For Shirley, it was back to the streets.

“You don’t choose this profession,” she said. “It chooses you.”

Cholera isn’t the only ailment rearing its ugly head nearly 10 months after Haiti’s earthquake. According to multiple indicators, such as reports by human rights organizations, interviews on the streets and discussions with medical professionals in Port-au-Prince—Haitian women are turning to sex work in increasing numbers.

Since January, ANAPFEH has lost funding as it battles with big-name international organizations for post-quake money. But the number of sex workers who come through its doors has swelled with each passing month. In 2009, it served about 300 women. As of October 2010, more than 400 had already sought help from its eight paid and two volunteer staff members.

ANAPFEH’s clients are younger these days, Shirley said. It doesn’t surprise her to see skinny 14-year-olds sitting in the office.

“Nothing else is important”

The government has responded to the post-quake increase in sex work by punishing those selling their bodies. Once a well-known destination for sex tourism, prostitution is illegal in Haiti.

In September, police raided the area by the sprawling camp of Champs de Mars—just feet from the collapsed presidential palace—arresting 40 women for engaging in sex work. The news made front pages, and local women’s organizations decried the persecution of females who had no other way to provide for their families.

The increase in sex work has many worried about a public health crisis. In the past two decades, Haiti has had more success in the fight against HIV/AIDS than most developing nations, dramatically reducing its infection rate from about 6 percent in 2001 to 2.2 percent in 2007.

“But we are very concerned about AIDS now,” said Dr. Gislène Mézadieux an obstetrician in Port-au-Prince who works for POZ, which provides psychosocial support to women affected by sexual violence.

Condoms are readily available in some areas, but difficult to come by in others. Mézadieux has seen something more startling: Some aren’t using protection because they’ve stopped caring. “They say, ‘My mother died, my friend died, nothing else is important.’”

The results can be ugly and painful. Abortion is illegal here, and medical agencies are reporting high numbers of failed “street abortions” from some women as young as 10.

With the government unlikely to step in on behalf of Haiti’s women, the only solution, said ANAPFEH executive director Kettly Alysee, is to support programs like hers—local, established ones with a firm understanding of how to provide alternate options for women forced into sex work.

“It’s all about the economy,” she said.

In the back of a dark restaurant in Port-au-Prince, Shirley is reluctant to have her picture taken. “Sex worker” is not her identity, and she has no interest in being the issue’s poster child.

She’s adamant, however, about having her voice heard by those far away.

Its always sad to see such women prosecuted. There are women in the world who prostitute themselves because it makes more money than alternative work; there are others who do it because there is no alternative work. Those who judge and wish to punish this latter group have no empathy, decency, or morals