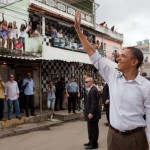 Business and political leaders, including Brazilian President Dilma Rousseff, met with Obama in Brasilia on Saturday. On Sunday, Obama visited City of God, the Rio de Janeiro slum made famous by the 2002 film.

In the afternoon, Obama celebrated the similarities between Brazilian and U.S. democracies in a speech directed toward the Brazilian public and delivered at Rio’s Theatro Municipal. Obama offered Brazil as a model that countries in the Middle East should emulate. “Those who argue that democracy stands in the way of economic progress, they must contend with the example of Brazil,” Obama said.

The organizers originally planned for Obama to deliver the speech outside in the city’s Cinelândia neighborhood to an audience of 10,000, but the Secret Service recommended moving it indoors, citing security concerns.

The White House planned for the trip to Brazil to focus on trade, but U.S. military action against Libya also loomed large. Obama gave the order for the U.S. military to attack the North African country from Brazil.

Obama will meet with Chilean President Sebastián Piñera in Santiago today. In anticipation of Obama’s visit, several hundred people protested a U.S.-Chilean nuclear energy agreement and demanded that the U.S. president apologize for his country’s involvement in the 1973 coup that ousted left-wing President Salvador Allende and installed the dictatorship of Augusto Pinochet.

Half a Million Affected After Puerto Rico’s Record Earthquake

Jean-Bertrand Aristide To Return To Haiti Ahead Of Runoff Election