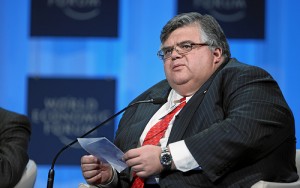 Carstens, who assumed control of Mexico’s central bank (Banco de México) in January of 2010, bills himself as the champion of the emerging-markets nations and believes theses markets need to play a much larger role in setting the agenda of the IMF.

Carstens earned a doctorate in economics from the University of Chicago before becoming Banco de México’s International Treasurer in 1989. He has spent most of his professional career at Mexico’s central bank, but was also a deputy managing director at the IMF for three years before becoming Mexico’s finance minister in 2006.

Mexican President Felipe Calderón is a strong supporter of Carstens and could play a key role his bid for the IMF post.

With Europe backing front-runner Christine Lagarde of France and other Latin American nations giving Carstens lukewarm support at best, Calderón’s support of Carstens is a plus in the eyes of international community. The Mexican president is well-known for his powers of persuasion on the international scene.

The support of the United States would also be be necessary for Carstens bid, especially after France announced Tuesday that Lagarde won the support of China along with that of Britain, Italy, Germany, Sweden and Ireland. Carstens said he had “some conversations” with officials in the United States on the subject of his candidacy.

Since the formation of the IMF after World War II, Europeans have monopolized the highest post at the lending institution, with the United States helming the World Bank as part of a six-decade long “gentleman’s agreement.”

Mexico and other countries have argued that the selection process should be based on merit and not nationality and Carstens is adamant that the IMF does not need a European to solve the debt crisis in the euro zone.

“I don’t see why, for the fund … to contribute to solving the crisis in Europe, a European has to be the managing director,” he said, according to Reuters. “Right now the crisis is in Europe, but we don’t know where the next crisis will be. We need a managing director who is there for all the membership and who has the capacity to contribute to the resolution of issues in all parts.”

One thing that may help Carstens’ bid more than anything else is the memory of the IMF’s previous French managing director Dominique Strauss-Kahn’s problems and also the potential legal probe into a 2008 payout involving Lagarde, a prominent businessman and a state-owned bank.

“Having a European run the IMF at a time like this makes no sense,” said Simon Johnson, an IMF chief economist from 2001 to 2008. “The IMF is going to be called upon to commit a lot of its resources to help Europe. You need to have somebody who has some critical distance from the crazy schemes that the Europeans have gotten themselves into.”

Nominations for the IMF position can be lodged until June 10 and a decision is due by the end of the month.

In the video below, Carstens discusses his IMF bid in an interview with Bloomberg.

Bilderbergers May Give Green Light to Mexican Central Banker as New IMF Boss « www.Thenewsbomb.com says:
June 9, 2011 at 12:40 am

[…] the formation of the IMF after World War II, Europeans have monopolized the highest post at the lending institution, with the United States helming the World Bank as part of a six-decade long “gentleman’s […]