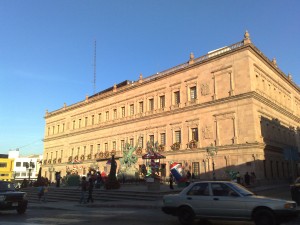 The Mexican Attorney General’s (PGR) office began an investigation into a grenade attack on a newspaper in the northern state of Coahuila.

The attack occurred around midnight on Sunday in the city of Saltillo, where a grenade was thrown at the offiices of the Vanguardia newspaper on the Boulevard Venustiano Carranza, one of the city’s main thoroughfares.

No injuries were reported, but the newspaper’s offices and some cars parked outside were damaged. Following the attack work continued at the newspaper and Monday’s edition appeared on newsstands as scheduled.

The attack appears to be an attempt to scare the newspaper’s editorial staff, which has recently become common practice in parts of Mexico. Sunday’s incident is the seventh attack on media facilities in Coahuila in less than two years and Mexico’s National Commission on Human Rights (NCHR) recorded 22 incidents in the past five years.

In January of 2010, Valentín Valdés Espinosa, a 29-year old reporter for the Zócalo de Saltillo newspaper, was kidnapped and killed. Attached to his body was a written warning of the kind normally left by drug traffickers.

IAPA President Gonzalo Marroquín said that so far there is little clarity about the motives of the attack, in relation to whether it was due to stories published by the newspaper or was a new act of violence by organized crime to get public attention.

Vanguardia was founded in 1984 and has been a member of the IAPA for 27 years. It was one of 50 media outlets to sign an agreement in March that set guidelines for coveraging drug violence and establish mechanisms to protect journalists.

Reporters Without Borders (RSF) considers Mexico as one of the most dangerous countries in the world for journalists, with Coahuila being the state with the third highest number of attacks on media workers in the country.

The state is also known to be the territory of the Zetas drug cartel, who are allegedly responsible for the death of Valdes and have helped turn the once peaceful state toward violence in recent years as it battles with rival Sinaloa and Gulf cartels for control of lucrative smuggling routes. Coahuila has numerous small border crossing with the United States and access to key transit routes leading to Monterrey and larger border towns like Nuevo Laredo and Reynosa.