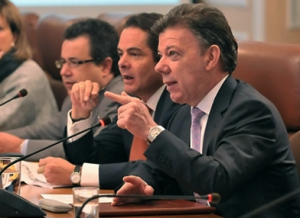 Top Story — Guerrillas from the Revolutionary Armed Forces of Colombia (FARC) killed two mayoral candidates in the Colombian department of Antioquia over the weekend, a sign that violence is on the rise in the lead-up to October’s local elections.

Conservative Party candidate Guillermo Roldán Correa and Partido de la U candidate Donay de Jesús Correa Londoño, who were both running for mayor of Campamento, were killed by the FARC after being held for a short time in the the village of La Concha. The two politicians had never previously received any threats and had traveled without bodyguards, according to José Acevedo, the police chief of Antioquia.

Acevedo also said that both candidates were about five hours driving distance from Campamento when they were killed. Correa was in the village of La Polka and Roldán was in San Antonio when they were abducted.

The FARC’s 36th Front has a strong presence around Campamento, where in the past they have set up roadblocks, killed and kidnapped people and have also attacked the electricity infrastructure and roads in the area. The guerrillas in the region allegedly earn their income from the drug trade and by extorting local gold miners.

Violence by the FARC has been on the rise in recent weeks, with the group attacking a mayoral candidate for El Bagre in Antioquia and threatening conservative leader Liliana Rendón.

The attacks also coincide with the 47th anniversary of the FARC’s founding. On Monday the guerrilla group released a communique where it called for a “political solution” and a “civilized” end to the conflict in Colombia and blamed the government for preventing the end of the armed conflict.

Colombia’s Interior Minister Germán Vargas Lleras took a hardline stance to the communique, saying the government will not consider a humanitarian exchange and that the FARC should release all prisoners without any conditions.

“Nobody is going to build a stage for a political role without concrete facts that demonstrate a real will to release these people, so the government is not prepared to mount a platform that does not lead to anything, ” Vargas said, according to Colombia’s Caracol Radio.

The FARC have been fighting the Colombian government since 1964. Over the past decade their size and capabilities have been reduced as Colombia’s government launched a military offensive first under former-President Álvaro Uribe and continued under current President Juan Manuel Santos.

However, according to Colombian magazine Semana, the recent attacks and kidnapping by the FARC show a resurgence in the group.

Trump Organization may return for business to Dominican Republic

The murder trial of a U.S. Border Patrol agent accused of shooting across the Arizona-Mexico border begins today