An aerial view of the Amazon rainforest, near Manaus, Brazil. 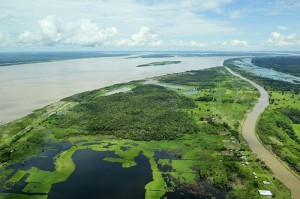 An aerial view of the Amazon rainforest, near Manaus, Brazil.

Top Story — Following a meeting on Monday, the Brazilian government said that it plans to protect rural activists and increase policing in the Amazon rain forest after a recent upsurge in violence toward activists due to disputes over illegal logging.

Led by Brazilian Vice President Michel Temer, the meeting brought together Brazil’s ministers of environment, justice, rural development and human rights to help foster cooperation between the federal and state governments in an effort the quell the violence. Later this week meetings will be held with the governors of the states of Pará, Amazonas and Roraima in the capital, Brasilia.

“The federal government will not hold back on efforts to bring peace to the region,” said Justice Minister Luiz Paulo Barreto. He added that Brazil’s government will analyze all the cases on a list compiled by the Catholic Land Pastoral (CPT) watchdog group.

According to the CPT, more than 1,150 rural activists have been killed in Brazil over the past 20 years. The murders have been linked to gunmen hired by loggers, ranchers and farmers to silence protest over the illegal logging of forests.

Last week rubber tapper José Claudio Ribeiro da Silva and his wife Maria do Espírito Santo da Silva were shot down by gunman in a small city in the northern state of Pará. News of the murders came hours before Brazil’s lower house voted 273 to 182 to pass a controversial bill to reform the Forest Code.

The measure would allow small farmers more liberty to cultivate and deforest protected environmental areas in the Amazon forest. The measure would also grant amnesty to those guilty of illegally deforesting the area prior to 2008 (such crimes are punishable by fines).

Last Friday, another rural leader, Adelino Ramos, was shot dead in the state of Rondonia. Widely known as Dinho, Ramos was shot by a motorist as he sold vegetables in Rondonia’s capital, Porto Velho.

A man named Ozeas Vicente was arrested Monday after turning himself in for killing Adelino Ramos.

After Monday’s meeting, ministers gave no details to explain how the government plans to increase policing in the rural Amazon states. The Brazilian Justice Ministry did however did ask for the federal police’s participation in investigating the death of the two activists in the state of Pará.

“We will not accept these murders, and will intensify monitoring and investigation and strengthen actions leading to sustainable development in the region,” said Rural Development Minister Afonso Florence, according to The Washington Post.