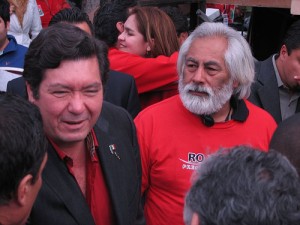 Top Story — Mexican federal prosecutors formally charged Wednesday the former mayor of Tijuana with illegal possession of a large cache of firearms and ammunition and brought him back to Baja California state from Mexico City.

Jorge Hank Rhon, one of Mexico’s richest men and a major player in the country’s opposition Institutional Revolutionary Party (PRI), was arrested on Saturday when soldiers raided his expansive Tijuana estate, which includes a casino, a huge private zoo and a soccer stadium. The army said it found 88 firearms and nearly 10,000 rounds of ammunition.

The U.S. Drug Enforcement Administration provided intelligence to Mexican authorities, but an unnamed source did not elaborate on the nature of the information.

After the raid Hank was transferred to the El Hongo State Penitentiary east of Tijuana, with members of his security team. The former politician, who owns the Agua Caliente dog-racing track and casino, was then flown to Mexico City for questioning before arriving today at the border city of Tecate after federal prosecutors charged him with possession of prohibited weapons.

It is now up to a federal judge to decide if there is enough evidence to send Hank and his security team to trial.

Hank is one of the most enigmatic and controversial figures in Mexican politics. The son of a former PRI governor of the central state of Mexico, he is allegedly involved in drug trafficking, kidnapping and the murder of a Tijuana journalist.

In Tijuana, thousands of people took to the streets to demand the former mayor’s release. Hank has a large number of supporters who claim that he has sought to help the poor and rumors have also been swirling that he is considering running for another political position in Baja California, perhaps governor.

“We are at ease because he’s here now,” said Manuel Lomeli Bolaños, after Hank was returned to state. “We are confident that he’ll be freed in less than one week if things turn out as we expect.”

Supporter’s of Hank and PRI members are claiming foul play from President Felipe Calderón’s government, with the country heading into its presidential campaign season and the unusual circumstances – no search warrant – surrounding the raid. Mexico’s federal security spokesman, Alejandro Poire, denied Monday that the arrest was a political hit on the PRI by Calderón’s National Action Party.

“Those things are part of the past and what’s happening in Mexico today is a big push for the rule of law, which had long been missing,” Poiré said, according to The Associated Press.

Andrew Selee, director of the Mexico Institute at the Woodrow Wilson International Center for Scholars, also doubts the arrest had to do with politics in the lead up top the elections, as the government would have sought a more prominent opposition figure

“I suspect that Calderón wants to show that his government won’t stand for impunity from public officials and former public officials,” Selee said to The Associated Press. “Hank is a relatively easy target compared to other politicians since he’s now out of government and is seen as something of a maverick even within his own party.”

[…] arrest was viewed by supporters and some members of his fellow PRI members as a political attack by the government of President Felipe Calderón in the lead-up to the country&#82…. It was rumored that Hank was planning to run for another political position in Baja California, […]