A view of Tijuana, where Jorge Hank Rhon was once mayor. 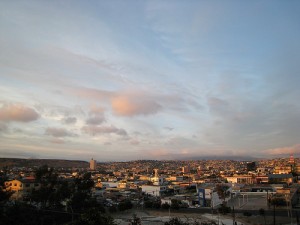 A view of Tijuana, where Jorge Hank Rhon was once mayor.

A Mexican judge ordered the release Tuesday of Tijuana’s former mayor due to lack of evidence, after he was arrested earlier this month for the illegal possession of a large cache of firearms and ammunition.

Jorge Hank Rhon, one of Mexico’s richest men and a major player in the country’s opposition Institutional Revolutionary Party (PRI), had been held since June 4 when soldiers raided his expansive Tijuana estate and found 88 firearms and nearly 10,000 rounds of ammunition on the property.

Mexican federal prosecutors said only 10 of the weapons were licensed and the prosecutor of Mexico’s Baja California state later added that ballistic tests showed that two of the guns found had been used in homicides, but Hank denied any knowledge of the guns and his lawyers said that the weapons did not belong to him.

Judge Blanca Evelia Parra said there was not enough evidence presented before time ran out on the constitutional limit to hold Hank  and the eight others arrested with him on charges of illegal possession of weapons, ammunition and possession of weapons for use only by the military. The ruling can be appealed.

The judge’s decision was made early in the morning and soon afterward Hank’s lawyers, a Maserati used by the politician and hundreds of supporters were outside the prison where he was held.

It is unclear if officials might try to re-arrest Hank on other charges, as he still faces questions over two of the seized guns that authorities have linked to the Tijuana killings of a security guard in December 2009 and an alleged car thief in June 2010.

Hank’s arrest was viewed by supporters and some members of his fellow PRI members as a political attack by the government of President Felipe Calderón in the lead-up to the country’s presidential campaign season. It was rumored that Hank was planning to run for another political position in Baja California, perhaps governor.

His release can also be seen as a setback for the Calderón administration’s prosecution of organized crime in Mexican courts. Hank is allegedly involved in drug trafficking, kidnapping and the murder of a Tijuana journalist.

“It’s going to be a huge embarrassment to the Calderon administration,” said David Shirk, director of the University of San Diego’s Trans-Border Institute and an expert on the Mexican judicial system. “It’s not so much that they made a mistake. It’s that they have not been able to convict a noticeable number of organized crime suspects.”

Besides supporters from Tijuana and the PRI, Catholic Church leaders also gave their backing to the former mayor.

“I have confidence in God that everything will be conducted in accordance with the law and you will soon be back with your family and us again,” Tijuana Archbishop Rafael Romo wrote in a letter to Hank Rhon that was published Monday in Mexican newspapers.

A large celebration is planned at Grupo Caliente, the racetrack Hank owns, upon his return to Tijuana.

Border Patrol Will No Longer Fly Deportees to Mexico From Arizona