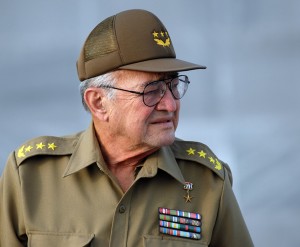 The death of Cuban Defense Minister Julio Casas should remind President Raúl Castro of two things: 1) that he has limited time to replace the old guard, and 2) age and health should be key factors in the selection of possible successors. With an eye toward the Cuban Communist Party Conference scheduled for January 2012, those messages amount to a call to rejuvenate the Political Bureau (average age: 67.5) by incorporating younger leaders and seriously considering substitutes for the key positions of first and second secretaries of the Communist Party (PCC, in Spanish).

Along with José Ramón Machado Ventura, General Casas was one of the two closest leaders to Raúl Castro. From a family in the town of Bombi in eastern Cuba, Julio Casas and his brother Senén joined the anti-Batista movement before turning 20. Ever since joining the guerrilla war under Raúl Castro’s command at the second eastern front, Casas became known as a thoughtful but unconditional follower of his boss. Casas was also an inseparable part of the military group formed at the Second Front Guerrilla Headquarters in Micara, from which several of most important leaders of the Revolutionary Armed Forces would emerge, including current PCC Second Secretary Machado Ventura and three defense ministers following the triumph of the Revolution—Augusto Martínez Sánchez, Raúl Castro, and Julio Casas himself.

Together with his brother Senén, who served as Raúl Castro’s aide and his chairman of the Joint Chiefs of Staff, Julio Casas was one of the revolutionaries who entered guerrilla ranks without any military training but became a career officer. After the Revolution, he went on to study in Soviet military academies and lead troops in Cuba’s African wars.

For decades, Casas served as Raúl Castro’s right-hand man in the military, as it took a prominent role in the island’s economy. Casas had the final word on military finances, and he was the only general with the authority to reject budget appropriations within the armed forces that had been mandated by Castro. Under Casas’ leadership, the military developed the Gaviota Corporation and the Entrepreneurial Administration Group (GAESA, in Spanish)—the bastions of the military’s economic expansion over the last two decades. With Casas’ support, the Revolutionary Armed Forces industries shifted toward a more market oriented efficiency approach. Under General Casas’ supervision, the Armed Forces developed a new type of military officers, managers and accountants, working toward a new economic order.

Within the ranks of the military, the death of Minister Casas should not provoke instability. From the time that Raúl Castro headed the Defense Ministry, it has become a modern organization, with clearly a defined division of functions and responsibilities. The region military commands were replaced in 2009 by generals in their early fifties, and the ministry functioned more and more on the basis of institutionalized promotions and work routines. For decades, several generations of generals have been promoted and retired according to clearly delineated career path that does not allow for skipping ranks (the case of General Arnaldo Ochoa would be the exception that confirms the rule).

The most likely possibility is that the new defense minister will be current first vice minister, Army General Leopoldo Cintra Frías. His ascent marks the first inter-generational changing of the guard in the Revolutioanry Armed Forces—one of the two central institutional pillars in the Cuban political system. Cintra, 70, was a soldier in the first column during the Revolution, under Fidel Castro’s command. When the uprising finished, Cintra had attained the rank of lieutenant, but rose to captain just days later after an incident in the Managua barracks outside Havana. He’s five years younger than General Casas and 10 years younger than President Raúl Castro. As the military adjusts to the change in command, tensions, retirements and personnel changes may occur, but nothing in the short run will change the military’s backing of Raúl Castro and the course of economic reforms charted by the one-party state.

General Casas was considered the third- or fourth-highest ranking official in the Cuban power structure (depending on where one places Ramiro Valdés, whose honorific title of revolutionary commander and member of the founding generation makes him difficult to categorize). When he headed the Defense Ministry, Casas combined the functions of vicepresident of the State Councils and vicepresident of Ministries. The most probable outcome is that those functions will be inherited by Casas’ replacement. Given the structure of power in Cuba, and the umbilical cord linking Raúl Castro with his military base, it’s unthinkable that the defense minister would not participate in the inner circle of decision-making.

One issue to watch over the medium term is that of civil-military relations. The new class of generals, and especially the colonels behind them, built their careers fighting wars in Africa and leading economic development at home—not in internal conflicts, such as the civil war of the 1960s. No one should underestimate them as naïve, but neither do they enjoy the political capital or have the experience outside the military that the “historic” generation did. They belong to a more technocratic generation, interested in government institutions and pragmatic thinking. They are less driven by ideology. In a few years, this dynamic could create the conditions for a post-Raúl presidency in the hands of a civilian—though not without the military leadership’s blessing.

Arturo López Levy is a doctoral candidate and a research associate at the University of Denver and a consultant for the New America Foundation and the Inter-American Dialogue. He is currently authoring a book on Cuba under Raúl Castro, which is scheduled for publication in November 2011. He writes regularly at the Havana Note.

Activists and Journalists Struggle to Make Colombia’s War Visible in the U.S.

[…] (L.A. NEWS DISPATCH)-The death of Cuban Defense Minister Julio Casas should remind President Raúl Castro of two things: 1) that he has limited time to replace the old guard, and 2) age and health should be key factors in the selection of possible successors. With an eye toward the Cuban Communist Party Conference scheduled for January 2012, those messages amount to a call to rejuvenate the Political Bureau (average age: 67.5) by incorporating younger leaders and seriously considering substitutes for the key positions of first and second secretaries of the Communist Party (PCC, in Spanish). (More…) […]