Guarani prepared for possible confrontation with the military police on the day of repossession of the land. Photo by Rafael Vilela.

SÃO PAULO—“They just started cutting. We woke up with the sound of the weeping trees,” says Wera Mirim, a Guarani Mbya leader.

On January 31st, one of the biggest construction companies in Brazil, Tenda Construtora, started to fell trees on a roughly two-acre parcel the company had bought to build 11 residential towers. The parcel adjoins Guarani Mbya indigenous land in São Paulo, which is the smallest demarcated territory in Brazil.

“Children were screaming, they were frightened,” says Mirim. “When we decided to check on the trees, they had already taken down 500 of them.”

Located within Latin America’s biggest city, the Atlantic Forest Reserve is part of an ecosystem that has lost around 80 percent of its vegetation coverage since colonization. Around 620 indigenous people live in this UNESCO-recognized biome, spread out in six different villages in a five-acre territory. They continue to struggle to maintain their language, traditions and rituals.

The Guarani Mbya occupied the deforested area to bring visibility to their struggle. When the coronavirus took hold in São Paulo, they were forced to disband the occupation. But the struggle to protect their land from the Tenda apartment complex development continues. On April 8, Judge Tatiana Pattaro Pereira accepted the request for interim relief and prohibited construction or environmental management by Construtora Tenda on the land until a new court decision. A hearing scheduled for May 6 was canceled due to coronavirus isolation restrictions. 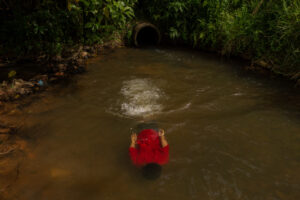 A Guarani child swims in a small pond on the Tenda construction site. The area is near several villages and has always been used by children to play and bathe. Photo: Rafael Vilela.

The Guarani Mbya used to live in an extensive area between the coastal line of the State of São Paulo, Brazil, and the city of Buenos Aires in Argentina. In the process of Portuguese and Spanish colonization their land was divided and drastically reduced. Now their villages are located on the South and Southeast of the country, usually close to metropolitan areas like the city of São Paulo and Rio de Janeiro.

“Urban sprawl takes place from the consolidated old centers of the large metropolises towards the periphery, into popular neighborhoods, and even traditional territories such as the indigenous lands. The city reaches them,” says Danielle Klintowitz, urban planner and general coordinator of Instituto Pólis. “This has a direct connection to real estate speculation, which creates new fronts for urban expansion on empty land, which is not urbanized, and cheap.” 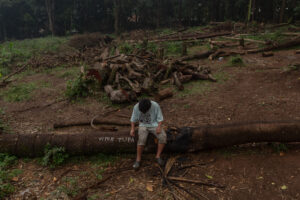 Vitor Tupãn is one of hundreds of children who participated in the occupation of the Tenda’s land after the trees were cut down.

Guarani Mbya culture does not separate the social from the environmental, or nature from culture. Their presence and way of living are inseparable from the forest. Being there, resisting on the land is, is a form of environmental preservation.

The trees the construction company cut down have special significance to the Guarani. The company felled araucarias, mastic trees, and cedar trees. The latter has an important meaning to this indigenous group as Jekupe explains, “the cedar tree has the power to reveal the Guarani spirit. It is this tree that gives name to our people.”

The centenary trees, which were close to 100 feet tall, were important sources of raw material for their traditional rituals but also for the construction of shrines.

“To the Guarani Mbya, to cut a tree is the same as killing a kin” affirms the Indigenist Missionary Council (CIMI) in a public statement.

“A tree is a wise being. It stands there, gives us its fruit, it filters the water in the soil,” says Jekupe. According to the indigenous chief, it is hard for them to accept the premise defended by the Juruá, white man, that the cutting of the trees is only an environmental crime. 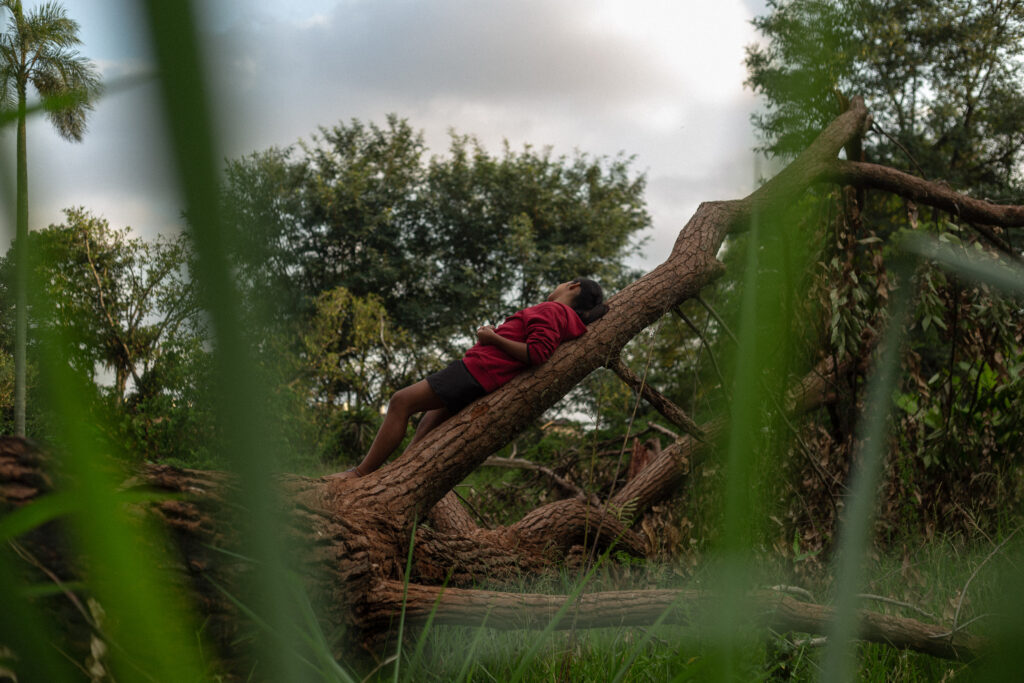 A Guarani child rests among felled tree trunks near his village, in Jaraguá, São Paulo.

“It is not just that. It is a destruction of spirits, which are the same as our own spirits. They are important to our life, to continue our lineage.”

The community organized a funeral rite in the deforested area in the name of Nhanderu, one of the most important Guarani deities.

Even facing this scenario, the construction company said in a public statement they “respect the local community,” assuring that “all the necessary procedures were adopted in order to have the approval of their enterprise by the responsible authorities.” 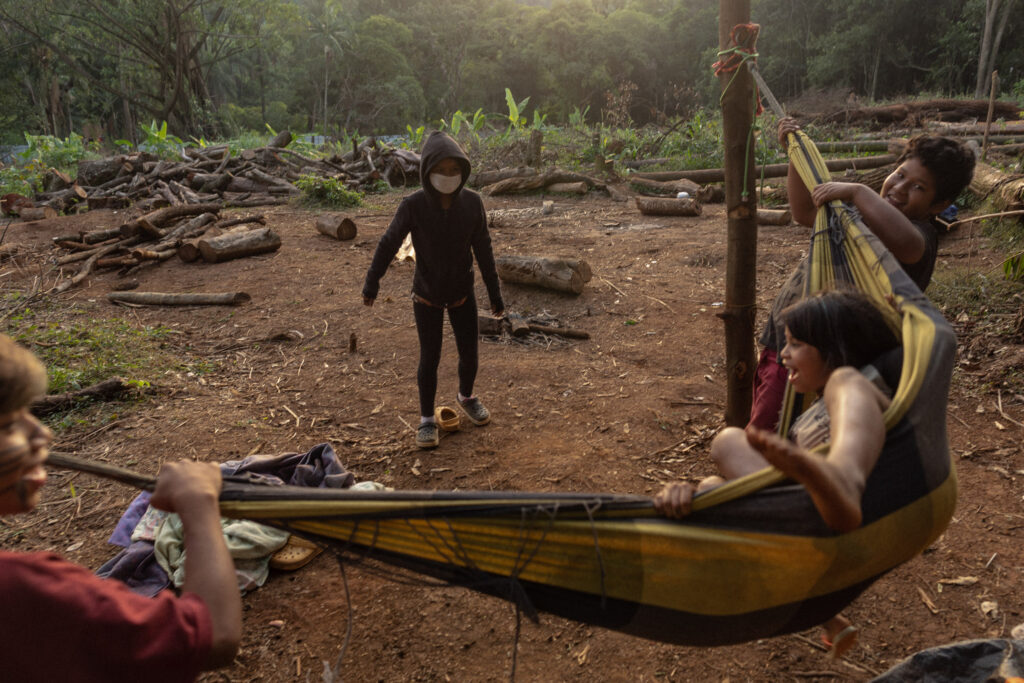 Guarani children play in a deforested area of ​​the Tenda building, in São Paulo. The Guarani indigenous community is considered to have a greater biological vulnerability to epidemics, especially to respiratory infections.

However, the occupation of the Jaraguá land by Tenda Construtora violates Brazilian legislation because the company did not provide a report on the impact of their enterprise on the indigenous community. Interministerial ordinance number 60, passed in 2015, requires a socio-cultural and environmental impact study of any construction to be implemented within five miles of indigenous lands. The 169 Convention of the International Labor Organization (ILO- UN) also guarantees that indigenous people should be consulted in order to decide on development projects that may cause changes in their local community.

“There is a legislation that needs to be followed,” says Jekupe. “We have a traditional and spiritual relation to the land. We understand that the land should be open to everyone, it shouldn’t be private property, where only a few would have access to it.”

Facing the devastating loss of centenary trees, a group of young leaders from the indigenous villages in the Jaragua decided to lead the occupation of their traditional land. Through a pacifist action, they were able to maintain their movement for 40 days. 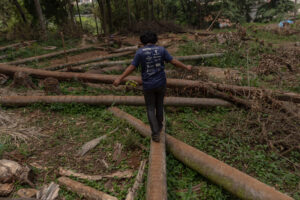 Guarani child plays among cut trees near his village, in Jaraguá, São Paulo. 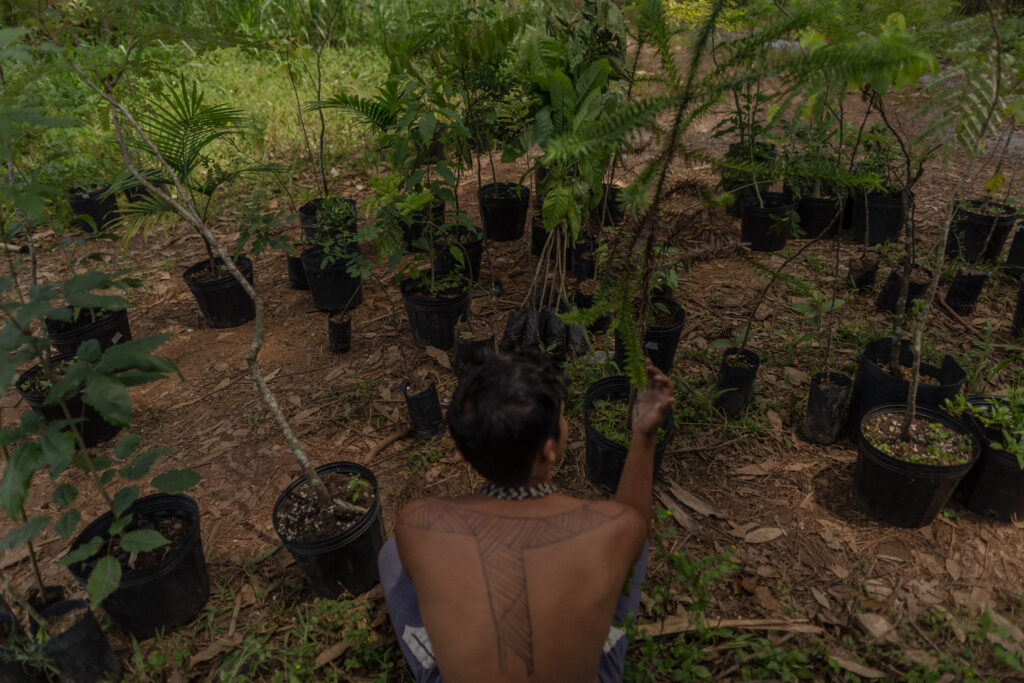 Giovanni Karaipoty, professor and indigenous leader, looks over some of the hundreds of seedlings that were donated and planted during the occupation.

The occupying group constructed a provisional facility, including a community kitchen and dormitories where hundreds of activists, artists and political representatives participated in activities supporting the indigenous movement. More than 200 trees were planted during the occupation as a symbol of resistance.

“This is not something that we are doing for us,” says Wera. “We are doing this for our grandchildren, it is a symbolic occupation, for the future.”

During the occupation, a legislative proposal to build a Municipal Park and Memorial Center for the Guarani Culture was sent to the São Paulo City Council, signed by alderman Gilberto Natalini (Green Party – PV). The proposal aims to guarantee green areas and the permeability of the soil in a city that is continuously facing severe environmental problems, such as floods and droughts.

On March 10, after a long period of intense mobilization, the Guarani Mbya had to leave the occupied land. The São Paulo State Court authorized the repossession and the activists voluntarily left the area to avoid any kind of violence from the special forces that were surrounding the site. 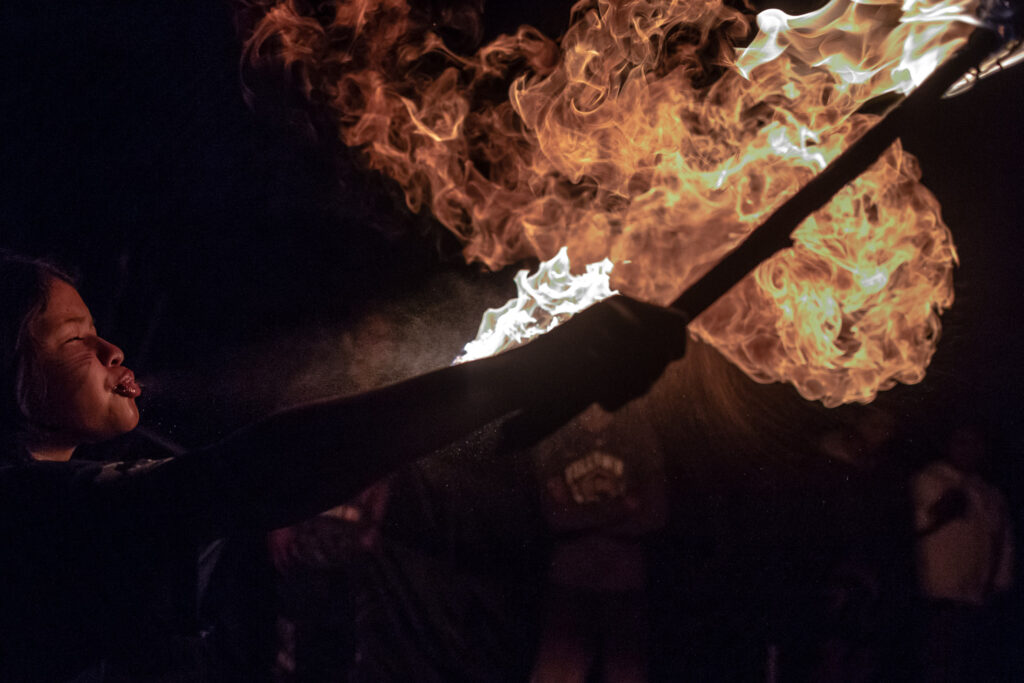 Guarani warriors learn the art of taming fire the night before their protest in downtown São Paulo.

The Guarani agreed to end the land occupation but maintained a 24-hour watch in the area’s front gate. Through this action, they aimed to avoid construction until they have a positive verdict from the judges of the case.

“It wasn’t easy. The police officers were constantly trying to intimidate us, trying to remove us from there,” Thiago said. “There were cars that drove by threatening us. They even knew my name.”

In his final statement in front of their supporters he shouted, “We are ready to keep resisting as long as we need. The construction company won’t touch a single straw.” 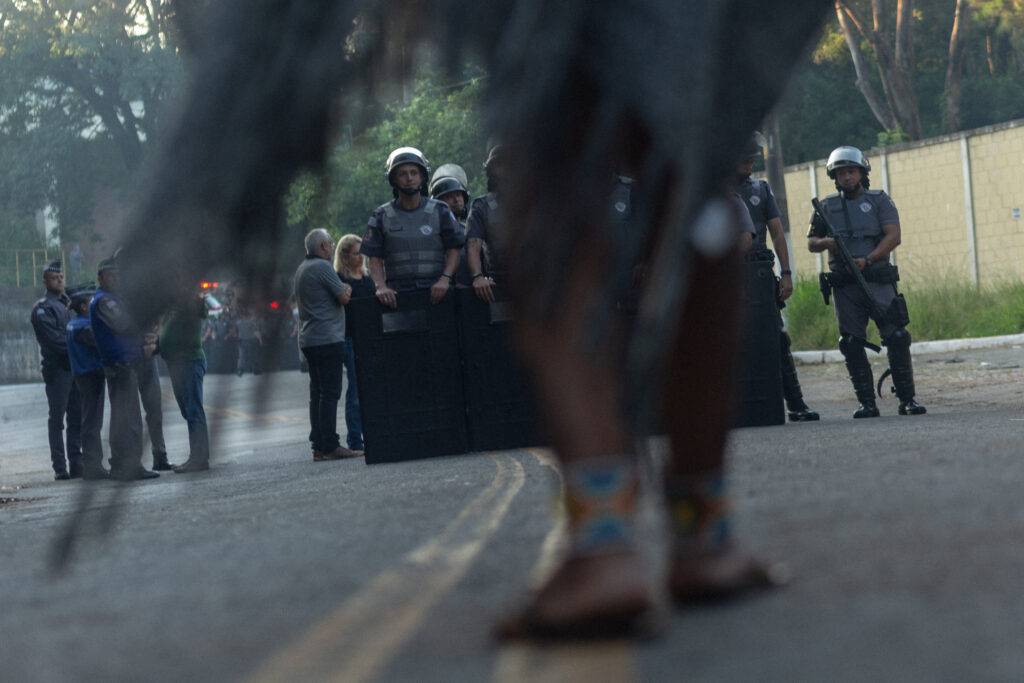 Sonia Barbosa, one of the main indigenous leaders of Jaraguá, walks in front of the military police battalion.

The city of São Paulo, the biggest metropolis in South America, is officially in a state of emergency since March 24 due to the novel coronavirus. During the social distancing protocol, while people were recommended to stay in their homes, natural life started to emerge again. The air pollution levels decreased around 50 percent according to preliminary studies and people were able to see stars in a clear sky, a rare phenomenon in the megalopolis.

“Nature is now showing through this virus its own power. People are not leaving their houses, they are not killing, they are not deforesting anymore. Nature is giving us a sign: look what happens when you stop,” says Thiago.

Even though the pandemic brought hope for those concerned about nature and the environment, its spread in the city of São Paulo forced a significant retreat in the Guarani struggle. Afraid of being infected, the Guarani Mbya decided to lock themselves in their villages, prohibited visitors and engaging in their social mobilizations. 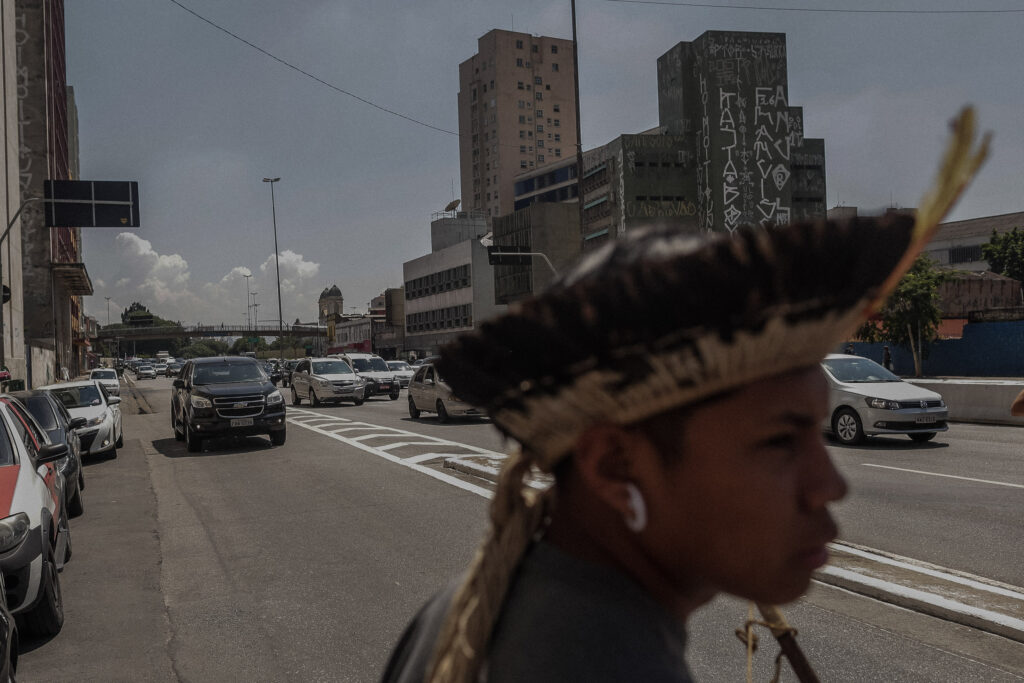 Guarani Mbya people hold demonstrations in downtown São Paulo to demand an end to deforestation and the transformation of the occupied land into an environmental park.

Indigenous people are considered to have a greater biological vulnerability to epidemics, especially to respiratory infections. President Jair Bolsonaro and his government have not developed any specific policy regarding indigenous health during the virus outbreak. The Guarani strategy of self-isolation was the only possible action at the moment.

Aware of this situation, Tenda re initiated work in the contested area. Fences, light poles, restrooms and surveillance equipment were installed aiming to prevent any resistance attempts from the indigenous movement.

“We came to an agreement in the Federal Court that Tenda was not allowed to continue with their work in the area,” Jukupe said. “The white man has all the opportunities to learn from this crisis, taking care of their own and the environment, but after the crisis is over, they continue to make the same mistakes.”

While the April 8 court decision ensures that, for now, construction will not continue, the Guarani are prepared to resume their struggle when the time comes. 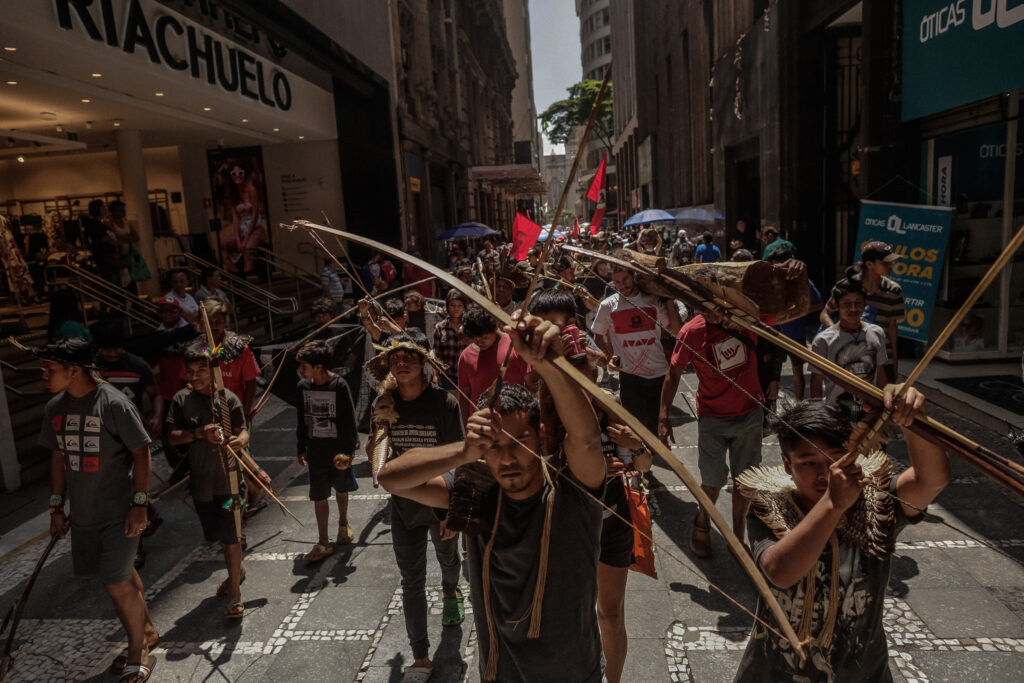 Thiago Henrique Karai Jekupe and the Guarani Mbya warriors participate in an act in downtown São Paulo to demand that justice be done for the crimes committed by the Tenda building. 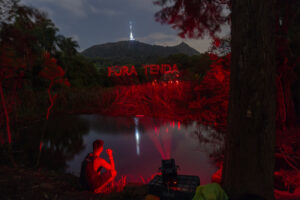 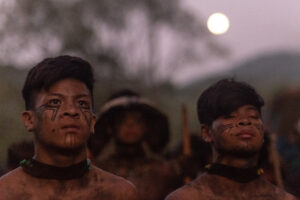 Guarani prepared for possible confrontation with the military police on the day of repossession of the land. 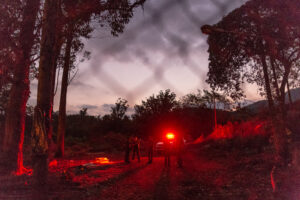 Rafael Vilela is an independent photojournalist and reporter. He is one of the founders of Midia NINJA collective in Brazil. His photographs are part of São Paulo’s Museum of Modern Art permanent collection. In 2014 he was invited by Magnum Photos to be one of the Brazilian photographers in the OffSide Brazil project to report the World Cup. Rafael was also nominated for World Press Photo Joop Swart Masterclass in 2013, 2014 and 2015.