A Mayangna man rests after arriving at an area cleared by settlers in the Bosawas Biosphere Reserve. Photo by Carlos Herrera.

MANAGUA—The town bell rang out at 3 a.m. on Friday, February 28, in Santa Clara, a Miskito community in the northern Caribbean region of Nicaragua. As people woke up, they knew a bell at that hour could only mean one thing: they were under attack.

Settlers, known as “colonos,” who infringe on Indigenous territory in Nicaragua, stormed into town, guns drawn. Many of the Miskitos hid, as a group from the community fought back.

“Fortunately, this time no one was wounded,” said Susana Marley, a community leader of Waspam, known as the “Big Mother.” Her voice betrays weariness and desperation. It is not the first time that Santa Clara, a community in the Wangki Twi Tasba Raya territory, suffered an armed attack.

A Miskito family in a community along the Coco River on the border of Nicaragua and Honduras. Photo by Carlos Herrera.

The settlers, among them farmers, ranchers, loggers, and miners, keep a careful eye on the communities. They invade with firearms and consolidate control of ancestral lands through the complicity of the ruling party, the Sandinista National Liberation Front (FSLN). Authorities turn a blind eye to illegal land trafficking through a system of forged legal documents that violates national and international law. The settlers’ incursions impact both the Miskito people and the Mayagna.

The Miskitos and Mayagnas are the main Indigenous groups in Nicaragua’s Caribbean region, a vast area, rich in natural resources, which covers half of Nicaragua’s territory. The Miskito population totals 150,000, and is made up of 23 territories with over 300 communities.

Before the February 28 attach, settlers had left a written warning on the door of the precarious health clinic in Santa Clara.

“The war is starting, so prepare yourselves. At any time you will have a visit because we don’t like to stab people in the back, that’s why we are giving you this warning, that we will be seeing each over very soon,” read the note, which was directed at the Communal Judge, one of the highest authorities in Indigenous communities. “You walked into the wolf’s mouth,” the note ended, signed by “el jefe,” the boss. 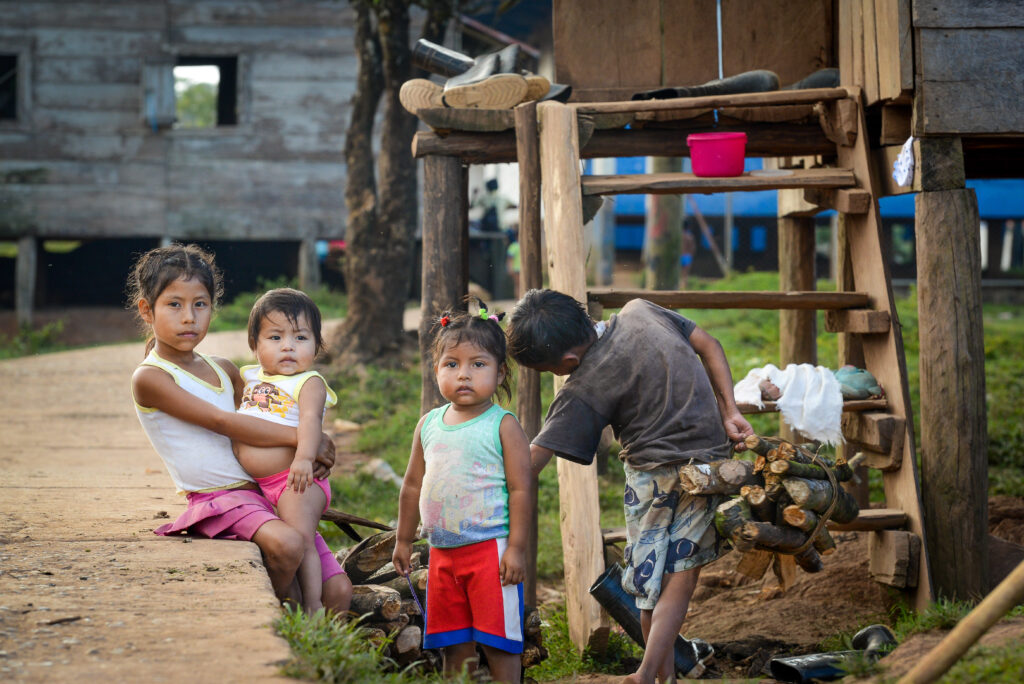 A group of children in the Mayangna community of Musawas, in the Bosawás Biosphere Reserve. Photo by Carlos Herrera.

Accustomed to armed attacks, the Indigenous communities have created a system to monitor and mitigate the aggression. Nonetheless, it does not always work.

On February 16, before the early morning attack, a group of settlers attacked several Miskito young people who were bathing in the kipla Tingni river. Jahaira Lacayo Wislaw, 17, was shot, the bullet shattering her teeth. She collapsed, writhing in pain, according to her aunt, Berty Wislaw German. Berty stayed with Jahaira and took her to the hospital.

Since 2015, attacks on Indigenous communities have increased. The Miskitos and Mayangnas blame the government of Daniel Ortega, which proclaims the banner of revolution and human rights, for its inaction to protect their vast territories.

The Atlantic Coast Center for Justice and Humans Rights of Nicaragua (Cejudhcan) is a human rights organization that works in the remote Caribbean communities. Since 2015, they have documented more than 40 murders of Indigenous people and 50 kidnappings.

In addition to the violence, lawyers and notaries in surrounding regions have a cottage industry fabricating property deeds and paperwork to cede land to the settlers, who then expel the Indigenous residents and declare themselves the rightful owners. Due to the state’s abandonment, and a weak property rights system, a settler only needs to present a handwritten document saying that he has purchased the property for a lawyer to draw up a deed.

LAND has access to deeds and avals, or guarantor statements, written for settlers. These are documents, without legal weight, which nonetheless can be presented as a property title. In other words, it gives a settler the right to a certain property in an Indigenous territory. They are illegal documents, because lands in Indigenous areas cannot be ceded, sold, or broken up under any pretext, unless the community has given consent. 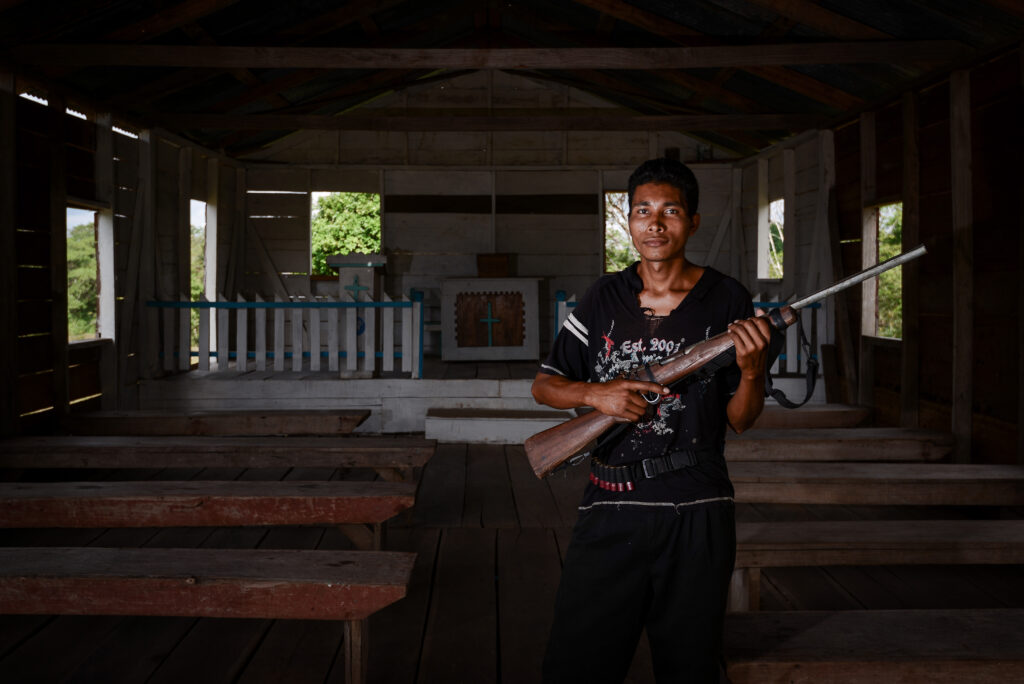 A Miskito man poses with one of the guns that community members have fashioned to fend off attacks from settlers. Photo by Carlos Herrera.

Regional Government Coordinator, Carlos Alemán, and councilors Waldo Müller and Adrián Valle Collins have written guarantor statements for settlers. All three are Sandinistas. None of them responded to LAND’s requests for comment. In September 2015, settlers said that Alemán and Müller had given them guarantor statements, after the Miskitos accused them of escalating the invasions and violence.

“We aren’t invaders. Those of us who live here have been given permission by the community leaders and regional authorities,” said a settler who asked not to be identified. He spoke on behalf of the Farmers and Ranchers Association of Tasba Pri, a group of settlers that has claimed communal lands for agricultural expansion. The source backed up his claim with documents signed by the Sandinista authorities. That same year, the courts suspended five public notaries who wrote guarantor statements, but they soon returned to work.

Indigenous people had reported these problems to the Attorney General’s office, lead until a year ago by Hernán Estrada, a lawyer known to be loyal to President Daniel Ortega. However, LAND found evidence that Estrada is also involved in land trafficking. LAND has access to a copy of a guarantor statement signed by Estrada, by which he ceded a parcel of over 10,000 acres (6,000 manzanas) in an Indigenous territory to two people. The recipients and Estrada did not respond to requests for comment. 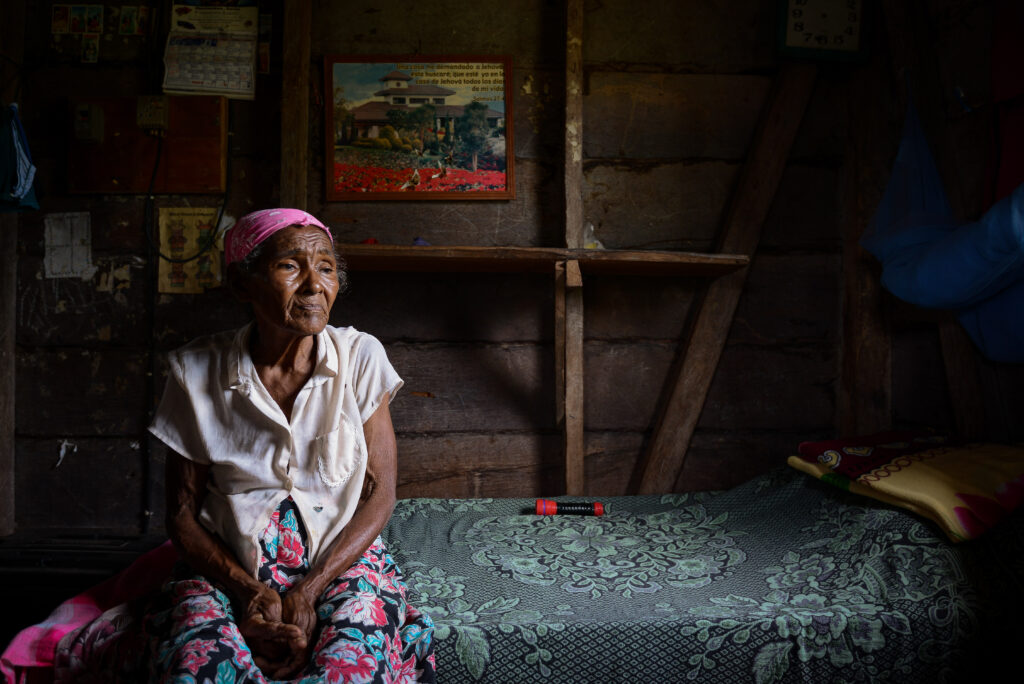 Leonarda Mercado Benítez, a Miskito woman, in her bedroom. Her community has suffered armed attacks by settlers. Photo by Carlos Herrera.

The government has issued land titles to 23 Indigenous communities on the Caribbean coast, fulfilling one of the steps laid out in the Communal Property Regimen Law, which required land demarcation and titling. However the process remains incomplete. Indigenous leaders say that ten years into the Sandinista administration, nothing has been done to finish the most important step of the law: saneamiento or territorial “clearing.”

Clearing the territory refers to expelling outsiders from the ancestral lands. It is a difficult process considering the number of mestizos who live in the territories, and natural protected areas. On numerous occasions, the Inter-American Commission on Human Rights has issued precautionary measures to protect the Indigenous communities. The government has ignored these measures.

The last major massacre took place in the heart of the Bosawás Biosphere Reserve, in the community of Alal, on January 29. Three Mayangna people were shot. Arly Samuel Gutiérrez died almost immediately, and Centeno Indalecio and Marconi Jarquín were gravely injured. Other people fled from the community to alert people to the tragedy. 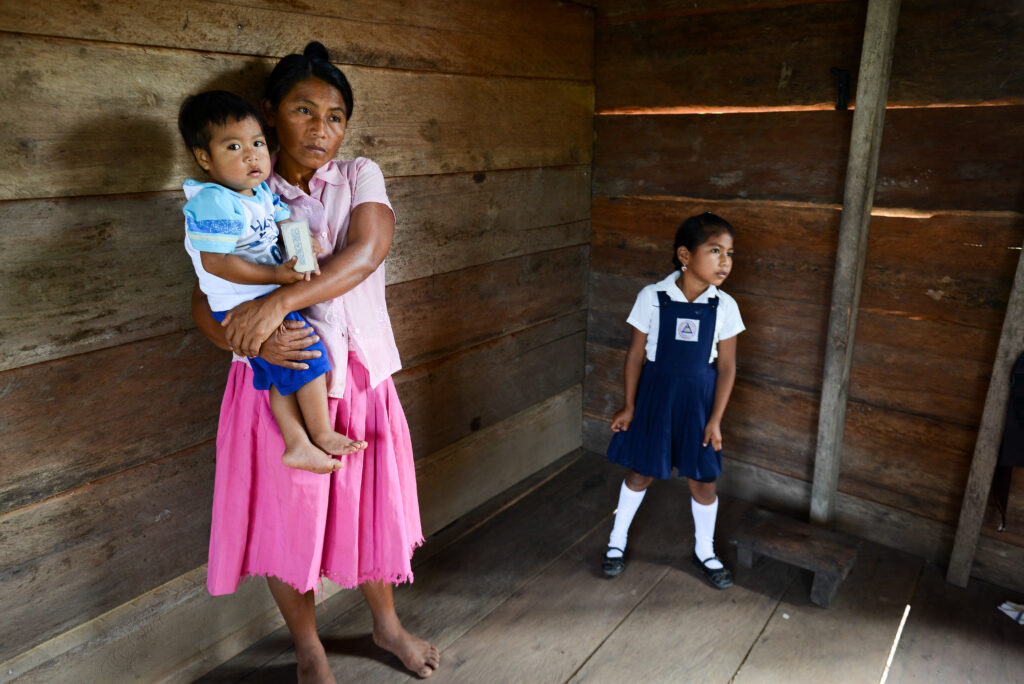 Ricalina Davis and her children in the community of Musawas in the Bosawás Biosphere Reserve. Her husband was killed by settlers. Carlos Herrera.

The settlers attacked Alal, shooting at other townspeople and burning down 16 houses, including the pastoral house, and killing animals. The attacks left six Indigenous people dead and eight disappeared, according to the community leaders.

The advent of the COVID-19 pandemic has created other problems for Indigenous communities. Human rights organizations have warned that the settlers’ incursions have forcibly displaced Indigenous people, putting them further at risk to the virus. Meanwhile the Indigenous communities of Karawala and Sandy Bay Sirpi, near the Rio Grande, decided to impose a quarantine in light of the government’s denial of the pandemic. The pandemic is only the latest challenge in a long battle to defend their territory. 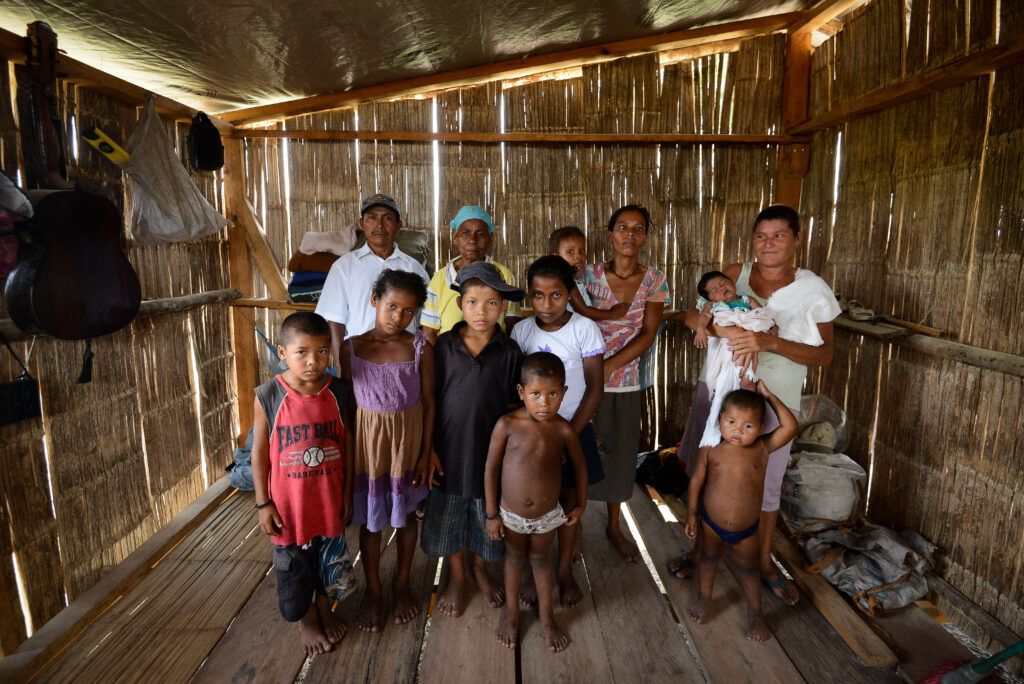 A Miskito family that has taken refuge in Honduras, after fleeing Nicaragua due to the violence of the settlers in their communities. Photo by Carlos Herrera.

Carlos Alberto Herrera González is a photojournalist in Managua, Nicaragua. He graduated in Social Communication from the Universidad Centroamericana in Managua. Herrera is a correspondent photographer for the newspaper El País and the German Press Agency DPA.