Mario Gonzales-Lafuente and Kenneth McClintock at the launch of a campaign to boost tourism in Puerto Rico.

Mario Gonzales-Lafuente and Kenneth McClintock at the launch of a campaign to boost tourism in Puerto Rico.

“Discover why Puerto Rico does it better,” reads the tagline for the joint tourism campaign launched by the Puerto Rican Governor’s Office and the Puerto Rico Tourism Company in New York on Tuesday.

The new tourism campaign launched alongside an aggressive tax incentive plan meant to alleviate economic challenges caused by years of recession, and to encourage private business investment in Puerto Rico.

Puerto Rico has been in an economic recession for the past five years, which has been exacerbated by the U.S. economic recession. In the summer of 2009, Governor Luis Fortuño initiated austerity measures to help the government stay afloat, which included laying off 30,000 public sector employees.

Drug smuggling and corruption charges have also contributed to a tumultuous political environment in Puerto Rico. In October, 130 people were arrested, including many police officers, in an FBI anti-corruption operation.

While elected officials from Governor Fortuño’s leading political party, the Partido  Nuevo Progresista (PNP), have not been directly implicated in the corruption, overall public opinion has suffered.

Beginning in January 2011, income taxes in Puerto Rico will be reduced by 50 percent for individuals, and 30 percent for businesses. The Puerto Rican government is also granting a five-year property tax holiday.

According to José Pérez-Riera, Secretary of the Puerto Rican Department of Economic Development and Commerce, the recession — which has been difficult for businesses and individuals alike — is not the only cause of economic downturn.

“Decades of high taxes are as much to blame for stagnation as the recession,” Pérez-Riera said.

In addition to the 2011 tax cuts, the government has granted a retroactive 7-15 percent tax break by cutting all income taxes in December 2010.

The campaign advertises Old San Juan as a historic gem (“the oldest city in the United States”) and El Yunque as the “only rainforest in the U.S. National Forest Service.”

“Visitors should feel they are welcome to history, and welcome to paradise,” said Mario Gonzales-Lafuente, Executive Director of the Puerto Rican Tourism Company.

Puerto Rico’s Secretary of State, Kenneth McClintock, agreed that the attractive destination and tax incentives are a winning combination for new private investors.

“Puerto Rico is one of the most attractive business environments in the world,” said McClintock. 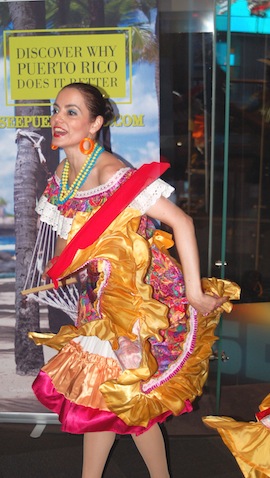 A dancer performed at the event.

The party contrasted sharply with the sad state of the Puerto Rican economy.

But Secretary McClintock is optimistic that this campaign will improve the island’s economic outlook, and said that change is already on the horizon. While the original austerity measure proposed by Governor Fortuño estimated that 30,000 jobs would be lost, only 12,656 jobs have been cut to date, and no additional layoffs are anticipated.

Von Diaz is a native of Puerto Rico and spent most of her life in Atlanta, GA. Von is a graduate of Agnes Scott College, where she earned a B.A. in Women’s Studies and focused her research on women in Latin America and the developing world. She has worked in community advocacy and communications for a variety of nonprofit organizations focused on women and children. She now holds a dual M.A. in journalism and Latin American and Caribbean studies at New York University.

I own and run a small Vacation Rental-Guest House in Rincon Puerto Rico. I hope Puerto Rico can improve the economic outlook, for Tourism for travelers coming into PR.
I have been doing business here since 2003. The Government of Puerto Rico, makes it stressful and hard to operate a business here with all the permits and running around you have to do, AND NEW made up LAWS behind closed doors just to take my hard earned money and NEW operating permits coming out every couple months. So, I know how hard it is to get things done when it comes to paper work for your business from government employees(Its like pulling teeth), Not that Im glad for the restructure and the firing of workers..But..Hey, they get paid to work and help people, which they DONT DO.. So, I say great, save money and get rid of the dead weight.
“Drug smuggling and corruption”, are you kidding me.. That is all they arrested 130, in a 2 year underground investigation and most were police, people are not stupid, I know its not just the police, but someone is letting the drugs slide under the radar.. If the police were to do there job correct and not looking to help corruption, this Island would be better off. There are traffic laws..but NOBODY respects them.. NOT even the Police, So its a shame..
There are Laws here in Puerto Rico that are broken every day, why not up-hold the laws that we already have before making new laws, that will not be up-held.
I am grateful for the tax cuts that are coming our way.. But, I know one way or another we will have to pay for it.
But, I am more interested in how the Government can regulate or improve or how to cut the cost of electric here.

[…] Luis Fortuño initiated austerity measures to help the government stay afloat, which included laying off 30,000 public sector employees. The administration of UPR claims the new $800 fee for students is needed to address a deficit […]