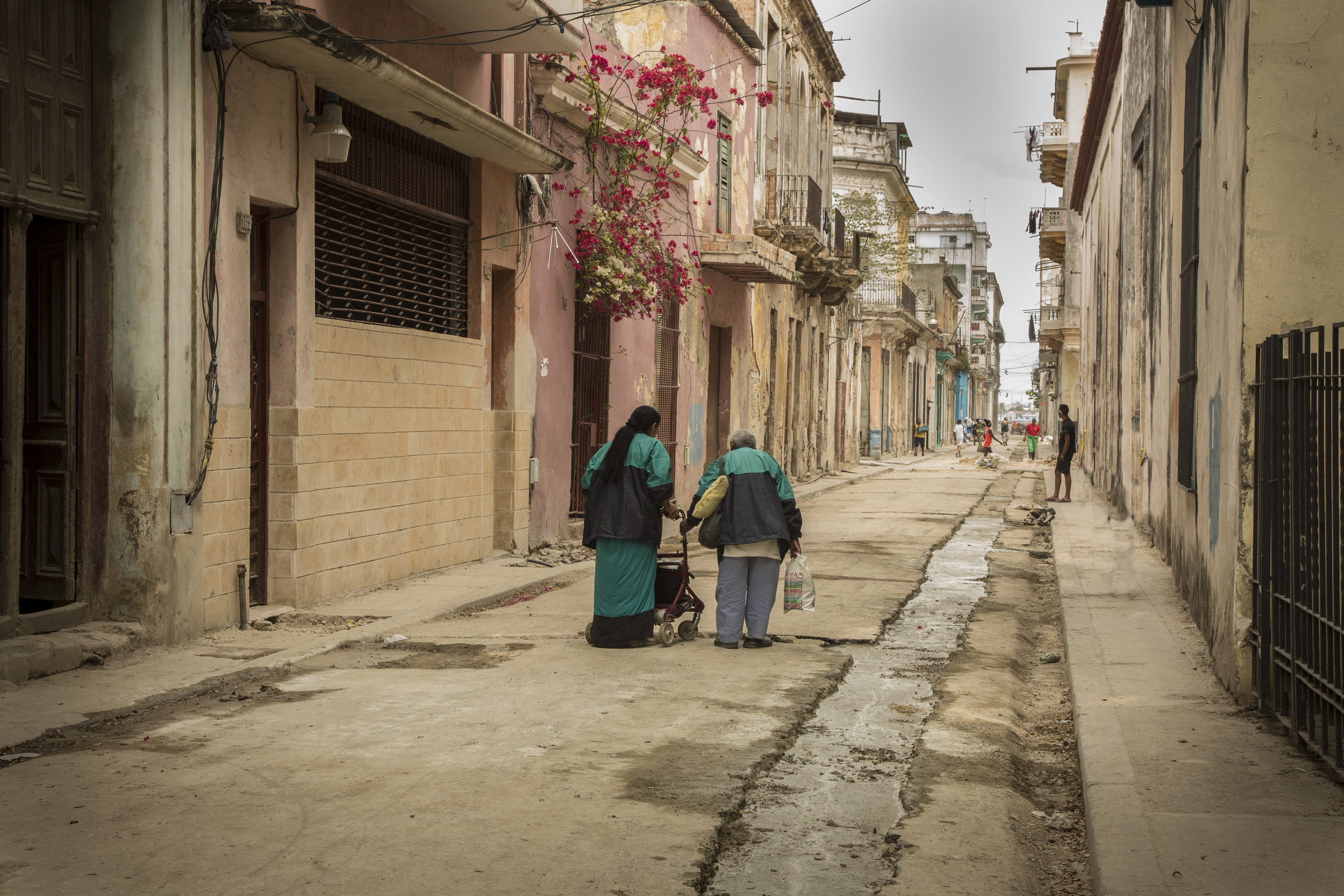 Margot walks home from the 'casa de abuelos' with her friend, Juana. While Margot ages, the city does as well. After injuring her leg in the collapse and growing older, Margot uses a walker to navigate the streets of Old Havana. (Photo by Katerina Vo)

HAVANA – Opening the door to her Old Havana home, María Margot Linares Domínguez (“Margot”), a regal, glamorous woman with the spirit and mannerisms of an Old Hollywood star, stands in harsh juxtaposition to the ruins that lay behind her.

The building has collapsed completely, the roof giving way to the brilliant Caribbean sky, leaving doors hanging without a destination in their frames. Reaching her room requires navigating past piles of debris, wood, and cement left over from the collapse, which emanate a thick, damp smell from the frequent, heavy rains of Cuba’s tropical climate. 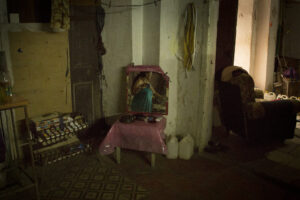 Margot’s reflection on a mirror holding a mug in the interior of her home. (Photo By Katerina Vo) 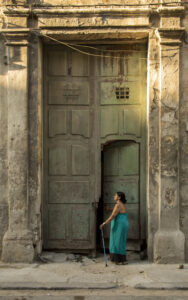 Margot stands in front of the entrance of her building that was built in the 1800s. (Photo by Katerina Vo)

Margot’s home is just one of thousands like it in Cuba, where antiquated buildings contribute to the country’s reputation of being “stuck in time,” drawing millions of tourists vital to the economy.

But it’s a double-edged sword– the same buildings, rapidly deteriorating with the passage of time, threaten the very existence of the city and its inhabitants as they age faster than the ability of individuals and the state to maintain them, sometimes leading to deadly outcomes, such as the 2020 death of three young girls who were crushed by a collapsing balcony as they passed beneath it.

The Cuban government has dedicated considerable effort and funding toward the maintenance of the touristic portion of Old Havana, a gleaming sector of the city encompassing neoclassical hotels, museums, and governmental buildings.

Funds from hotels and restaurants produced by this conservation subsidize the preservation of Old Havana and social programs in the city. But does the impact of these investments come fast enough?

Just a few blocks past the National Capitol Building, many of the residential buildings of the same time period have fallen into varying states of disrepair and structural instability, due to the economic impossibility of maintaining them.

Maintaining aging homes in Havana is a challenge due to a variety of factors, both climatic and economic. Cuba sits in the Atlantic Ocean’s hurricane path and is vulnerable to heavy rains for much of the year, high humidity, and salt air, which accelerate the deterioration of its buildings.

On the financial side, due to economic difficulties deeply exacerbated by the U.S. embargo against Cuba, and the prioritization of funding health care, education, and the development of more rural areas of the country, often neither the government nor individuals have the funds to maintain homes, compounded by the shortage of construction materials.

This is further complicated by confusion over who is responsible for housing repairs. Following the 1959 Revolution, mansions and large homes were subdivided and redistributed to poor and middle-class families, but whether repairs are the responsibility of the state or homeowners has often been unclear. 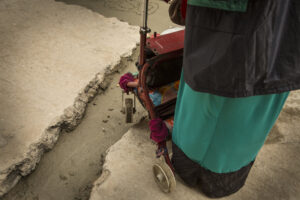 Margot with her walker outside of her collapsed building. (Photo by Katerina Vo)

Currently, Cuba suffers a housing deficit.  As more and more aging buildings become uninhabitable, there are not enough homes for the displaced to turn to.  A new Housing Policy was initiated in 2019, allocating funds to repair or construct just under one million homes (in a country of 11 million) over the course of a decade. In 2019, 43,700 homes were constructed, 10,801 more than planned.  However, the crisis has been so protracted that the policy has so far been insufficient to catch up and meet the needs of individuals like Margot, who continues living in the rubble of her home, which collapsed years ago. 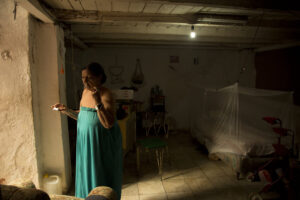 Margot stands near her bedroom window smoking a cigarette. (Photo by Katerina Vo)

Margot describes herself as a former singer and eternal performer.  She lives with Alberto, her nephew, in a building like many others in Old Havana. Due to a combination of factors, primarily the inability to afford building repairs, worsened by the harsh, wet climate of Cuba, Margot’s home collapsed, and she has nowhere else to go.  She lives in a room on the ground floor of what used to be a building for multiple families, the only part left intact. 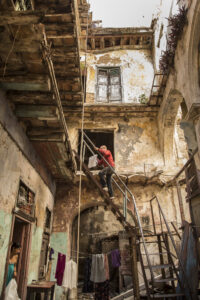 Margot’s nephew, Alberto, climbs a ladder to the collapsed upper floors while Margot hangs laundry below. (Photo by Katerina Vo) 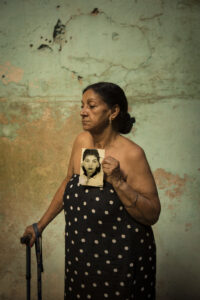 Margot holds a photograph of herself in her younger days. (Photo by Katerina Vo)

Like many, Margot has been on a waiting list to be placed in a new home for years but still has not received news of a possible placement.  Inspectors stop by, scribble notes on clipboards, and spray the area to prevent mosquitoes from breeding in the moist debris, but there is still no word of a concrete solution.

Margot spends her days at a nearby Casa de Abuelos, a neighborhood center for elderly individuals who lack family members able to care for them during the day.  The Casa provides daytime care, a social environment, and some meals to seniors.  For Margot, it’s a place where she is able to gather with friends, eat, and sing, but when the center closes its doors in the evening, there is nowhere else to go but home. 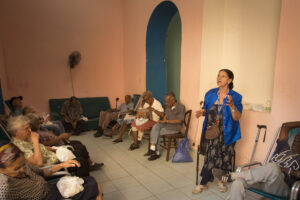 Margot relives her days as a singer, performing for the other members of the elderly home. Casa de Abuelos, is a place for elderly locals, providing them with company and food, but they must return home at the end of the day. (Photo by Katerina Vo)

Margot insisted on photographing her home as it was– the derrumbe, as she called it– the collapse. “Hay que ser realista,” she said, “you have to be realistic.” Yet Margot’s whole existence seemed to be an extension of her earlier life as a singer– she was always playing a glamorous role, even if it was set in a derrumbe.  This series is a collection of portraits of a woman aging in an environment that’s aging faster– just one person’s story of Havana’s housing crisis. 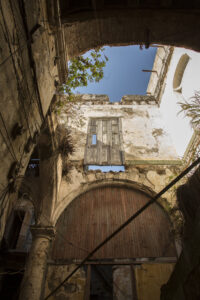 A door that leads to nowhere in Margot’s roofless building. (Photo by Katerina Vo) 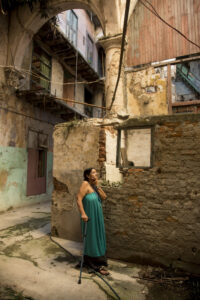 Margot’s building has collapsed entirely– the roof is gone, behind the crumbling walls are piles of debris. (Photo by Katerina Vo)

Katerina Vo is a U.S. photographer and visual artist based in Spain. She is a graduate of NYU, holding a dual degree in photography and social and cultural analysis. 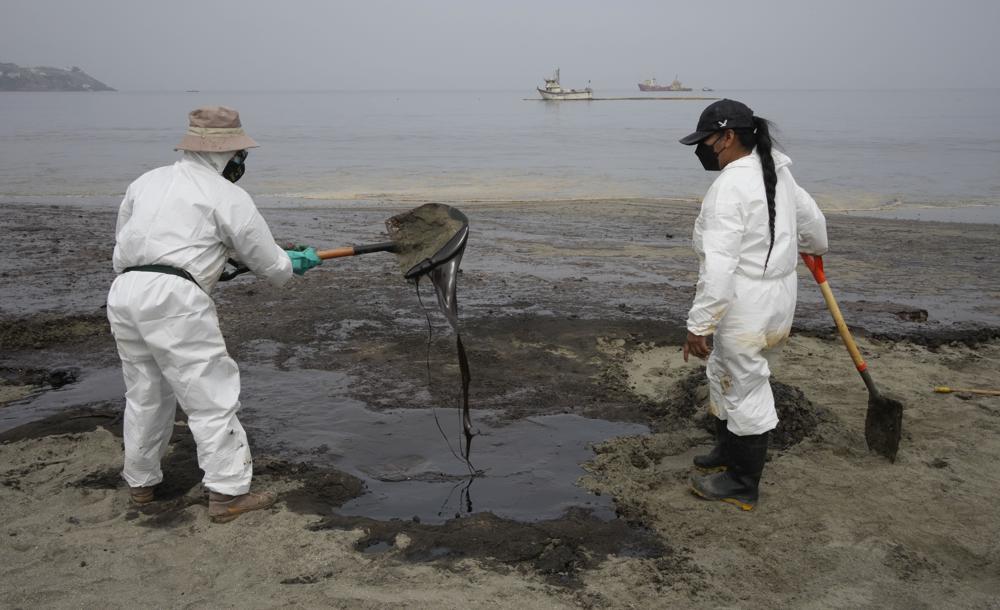 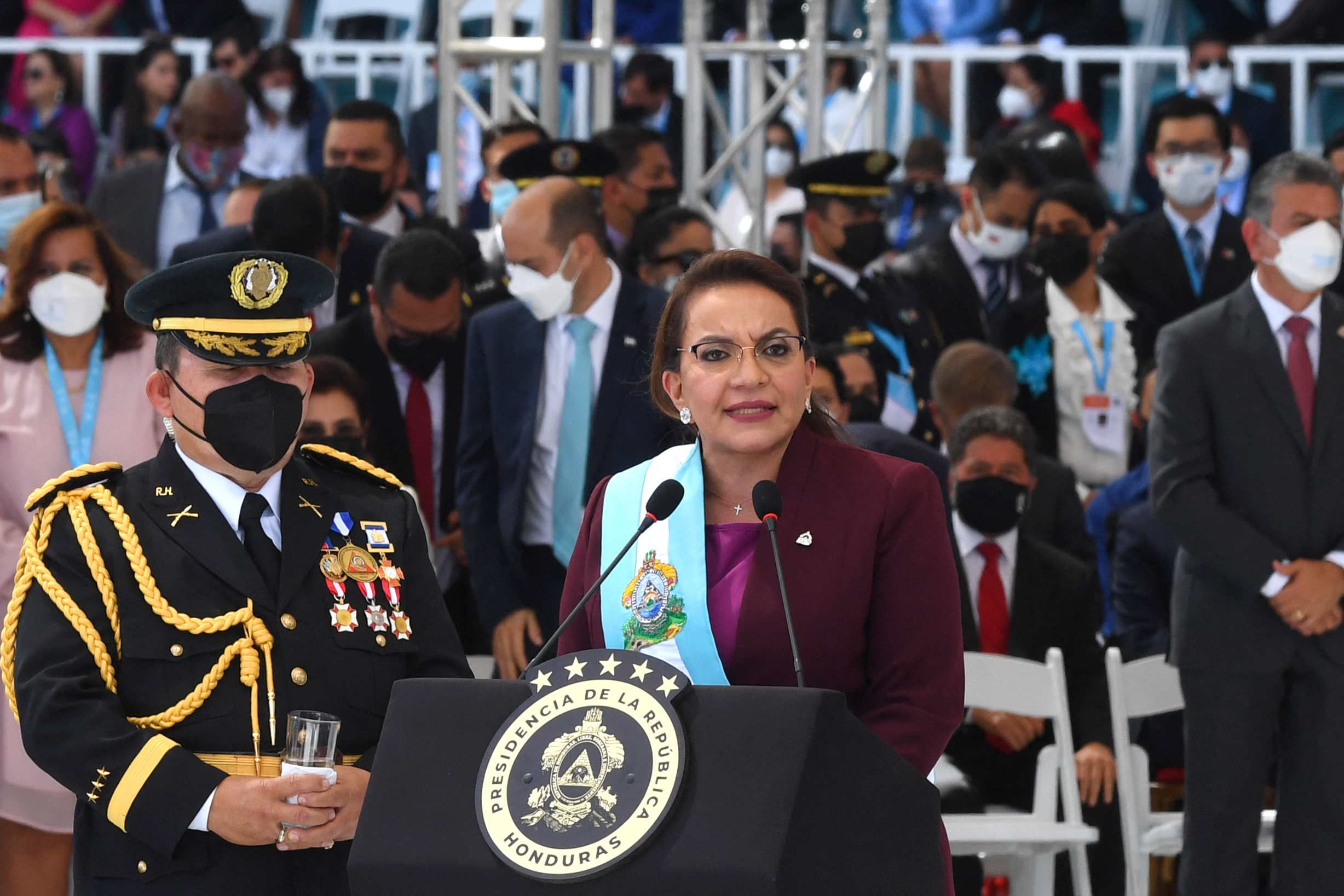