New York — American palates have for years embraced sushi, the refined and artful Japanese rendering of raw fish. But what about ceviche?

Why isn’t this crisply chilled, citrus marinated seafood as popular in the United States as its East Asian sibling? Likely originating in Peru, ceviche has been a staple throughout Latin America for centuries, and it’s delightfully light and flavorful.

“Ceviche is from the coast of Peru and the ocean,” Jose Peña, chef at Mancora in New York City said, adding that peppers, garlic, cilantro, red onions and other accouterments, depending on regional inflections, enliven the fresh seafood and citrus mixture. Note – the acid in the citrus means it’s less likely than uncured sushi to inspire an unpleasant bout of food poisoning, a fact that should be particularly appealing to a germaphobic society.

Reviews claiming ceviche will (or has) become the next raw craze have circulated in the food world over the past few years, and ceviche fans, such as Claudia Reano who bartends at Panca, a Peruvian ceviche restaurant in New York City, steadfastly agree.

“Peruvian food will be the next boom. It’s just a matter of time,” Reano asserted. And so far, while ceviche hasn’t garnered the popularity and recognition that sushi has, it’s slowly starting to make its mark, at least in terms of the sheer volume of restaurants serving it.

On Yelp, a popular Web site where the public can review restaurants in a number of U.S. cities, there are comments on more than two thousand sushi restaurants in New York City. Ceviche’s numbers are not as grand, but they’re still impressive — over four hundred New York City restaurants, from taquerías to sushi spots to actual cevicherías, have it on their menus. In Austin, Texas, a much smaller city, which nonetheless sees itself as a culinary contender, Yelp reviews more than two hundred sushi restaurants, and seventy-five restaurants serving ceviche.

Yet despite the growing number of ceviche restaurants (and the growing number of people who’ve heard of it), Japanese sushi is often seen as steeped in centuries of tradition, and ceviche is frequently seen as the blue-collar raw seafood experience — easy to prepare and nearly impossible to mess up.

But this theory needs reevaluating. According to the Sushi Encyclopedia, the word “sushi” at its inception characterized any type of meat salted for preservation, and the practice is said to have started in Southeast Asia.

Legend has it that ceviche began in a similar way in Pre-Columbian Latin America. Erick Chihuan, a native Peruvian and chef at Tutuma Social Club in New York City, explained that ceviche can be traced back to the Incas.

“They used dried, salted fish in an aguaymanto base,” Chihuan said. In case you need a briefing on rural Latin American produce, aguaymanto is an “invigorating Andean fruit,” according to the Web site of EcoAndino, a fair trade organization, and Chihuan verified its citrusy nature.

But Peruvian ceviche was set to undergo a transformation with the arrival of the Spanish conquerors, and later, Chinese immigrants.

“The Indians used to eat their food very bland…but since the Spanish conquered South America, we eat now with cilantro, salt and celery,” said Reano.

And after the conquest, ceviche became not just one dish, but many regionally distinct interpretations.

“In Peru, the ceviche is different in the north, central, and south coast,” Chihuan said.. “In the north we use yerba buena — which is like mint — and mango and strawberries. In the central coast they use cilantro, and in the south they use other seafood, and there’s a Chinese influence, like soy sauce and ginger.”

“The base makes a good ceviche,” Chihuan said. “I use garlic, cilantro, habanero peppers, lime — aji lime in Peru — celery, and fish or shrimp.” Chihuan’s favorite fish for ceviche is corvina, for its flavor and texture, “but here I use red snapper,” since corvina is native to the Pacific coast of the Americas and isn’t widely available in New York City.

In Austin, chef Emilia Aurtado at Casa Colombia follows similar guidelines. “This ceviche recipe is not my own,” she explained. “It’s a Peruvian recipe. I use cilantro, celery, pepper and lots of salt.” Unlike Chihuan, however, Aurtado uses lemon as the base for her marinade, and she prefers tilapia or catfish when preparing ceviche.

Ceviche can surprise on first encounter. Reano, for example, recalls hating ceviche when she first tried it as a child in Peru.

“I was 4 years old, and it was ceviche clásico…my father ate ceviche about two times a week, and he took me to a cevichería…I didn’t like the acid and I started crying,” Reano said, adding “The problem was also the spiciness. When you’re little, you can’t tolerate it.”

But that’s in the past, and now Reano eats ceviche all the time. “The garlic and the cilantro,” she mused with a Panca waitress. “They are both so good.” She munched on toasted, salted corn kernels, which can be eaten as a bar snack, perhaps with a traditional Peruvian pisco sour, and later sprinkled atop ceviche.

For many New Yorkers, ceviche has become a tapa of sorts, perhaps to be enjoyed as accompaniment to a martini during a night on the town. It serves another purpose in Peru, however, where no one would dream of eating ceviche so late in the day.

In Peru, a fish will be cubed, marinated, and put in a bowl sometimes less than an hour after being caught, she explained. After all, it’s widely accepted that historically, Peruvian fishermen cured fish with citrus to eat while at sea.

In New York, however, there’s more lag time between the ocean and the table. For Reano’s educated palate, just those few hours can make a difference.

“It’s not like in Peru, but here (at Panca) it’s pretty good. Last week I had some ceviche at a restaurant a couple of blocks away, though, and it was not good. I could sense that it had been frozen,” Reano said. She says previously frozen fish doesn’t absorb the citrus well, and loses the fresh seafood flavor that ceviche lovers cherish.

Peruvians are by no means the only Latin American ceviche lovers, however. Carolina DiGiacomo, bartender at Tutuma and native of Chile, is a fan.

“We do it differently in Chile,” DiGiacomo explained. “We use a grapefruit base.” 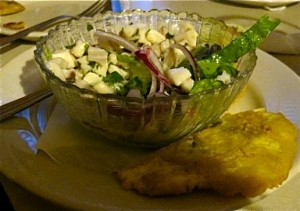 In Mexico, the tomato plays a central role. Alma Alcocer is the chef for Fonda San Miguel in Austin. A native of Mexico, she explained that Fonda San Miguel’s ceviche is “a traditional Mexican ceviche made from lime, oregano, serranos (chiles), salt, onions and tomato.”

While in Austin it’s all about Mexican ceviche, in New York City, Peru steals the limelight. And modern ceviche is seen as an art form not so distant from sushi at many posh New York City restaurants.

“Ceviche connoisseurs go to Peru,” DiGiacomo said. “I think the executive chef at Nobu went to Peru to learn to make it.”

In fact, the executive chef and creator of Nobu, Nobu Matsuhisa, did live in Peru for awhile, where he learned the craft. Nobu is a chain of Japanese restaurants that spans the globe.

The fusion of Peruvian and Japanese influences is a central feature of the food at Nobu.

“The impact of his (Matsuhisa’s) time in Peru cannot be overstated. Nobu began weaving Peruvian influences into his dishes; the beginning of his signature style,” according to Nobu’s website.

Whether or not ceviche becomes the craze Reano and other fans hope for, it’s certainly become a staple in New York and Austin. While sushi gets most of the attention in the world of the raw, ceviche is making its mark — and in places like Nobu, sometimes sushi owes its very deliciousness to the contributions of ceviche. Hopefully the future holds ceviche’s just reward.

[…] the rest here: FEATURE: Ceviche — South America Offers The Next Big Thing In Raw … Share and […]

[…] accouterments, depending on regional inflections, enliven the fresh seafood … Excerpt from: FEATURE: Ceviche — South America Offers The Next Big Thing In Raw … Share […]

Peru is the cradle of ceviche and we (peruvians) are very proud not only for the ceviche but for all our gret cuisine. Centuries of cultural crossbreeding has become in a rich and exquisite cuisine. We’are very optimistic that our food will spread all around the world its magic, we’are working on it, but on the meantime we invite everyone to visit our country and enjoy ceviche in a traditional cevicheria with fresh fish as it’s meant to be.

Cerviche is usually associated with the coastal areas of Peru although it is also made and eaten in remote parts of the Peruvian Amazon by some indigenous groups. The food in the Amazon is fresh as there is no refrigeration there to keep it. And of course, fresh water fish are used. To learn more about indigenous everyday life, including foods, and to see photos – visit ninosdelaamazonia.org