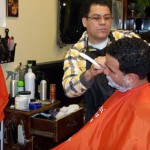 NEW YORK — Fifteen minutes after he heard about the earthquake in Haiti, Dominican barber Jose Taveras said he made a donation to the Red Cross. Taveras was born in the Dominican Republic, a country that shares the island of Hispaniola with Haiti.

“I consider Haiti a part of my country,” Taveras said through his friend Jay Hernandez, who acted as his interpreter. “We are one people.”

But not every Dominican feels that way. Taveras admits the two countries have not always gotten along. He said the Haitian occupation of the Dominican Republic between 1821 and 1843 is a source of resentment between the two nations. Even so, the owner of Groom Team barbershop in Washington Heights insists any grudges between Haitians and Dominicans have been buried, at least in his mind.

“That’s in the past,” Taveras said. “It’s not something we think about now.”

Dominicans in Washington Heights expressed remorse for the devastation and lives lost after the Jan. 12 quake, but some, unlike Taveras, did not paint a rosy picture of the current relations between the two countries. Victor Sangiovanni, whose father still lives in the Dominican Republic, says illegal Haitian immigrants in the D.R. are a continuing cause of frustration.

The Christian Science Monitor estimates that, in 2009, between 700,000 and 1 million illegal Haitian immigrants were living in the D.R. Most, according to the Monitor, come seeking economic opportunities, often in the construction industry.

“I don’t really like Haitians,” Sangiovanni said. “They keep trying to take over our country, and we keep having to send them back.” Despite his distaste for illegal Haitian immigrants, Sangiovani’s eyes widen with surprise when asked whether he’s donated money to the relief effort. “Of course,” he said. “They live so close to where I come from. I would hope they would do the same for us if an earthquake happened in the Dominican.”

Nicholas Gomez insists it’s no coincidence that Haiti was ravaged by a natural disaster while the Dominican was spared. He contends that belief in Catholicism, the primary religion practiced in the Dominican, spared his home country from catastrophe. “God is watching out for us,” Gomez said. “When you have God, you don’t have to worry about anything.”

Gomez said Haitians believe in voodoo and “worship the devil.” He stops short of claiming that practicing voodoo is what caused the earthquake, but he says Haitians must be careful who they pledge allegiance to.

“The devil will trick you,” Gomez said. “Haiti is living in the dark. They are moving in the wrong direction.”

Contrary to Gomez’ assertions, a 2008 United Nations report on national religions found that only 2 percent of Haitians practice voodoo. Further, those who believe in Haitian voodoo do not typically worship the devil. The primary deity in the religion is Bondye, whose name is derived from the French “bon Dieu” or “good God.” The U.N. report found that 55 percent of those living in Haiti are Roman Catholic.

Although he condemns what he claims are Haitian religious practices, Gomez said he made a donation to Catholic Relief Services, an international aid group contributing to the relief effort. Like Taveras, Gomez explains that geographical proximity fosters a feeling of brotherhood between the two countries.

Doyanica Pineda bristles at the notion that God had anything to do with the disaster, which has claimed an estimated 200,000 lives. The nurse, whose family resides in the Dominican, said it was purely a matter of chance that Haiti was struck.

“Some people say God is the one who made the earthquake happen,” Pineda said. “I don’t believe that at all. God is not responsible for this.”

Image (Simon McCormack): Jose Taveras gives Jay Hernandez a shave inside Groom Team barbershop in Washington Heights. Taveras contends Dominicans and Haitians no longer bear resentment toward one another, but other Dominicans disagree.

This article was originally published by Pavement Pieces.

Aid Groups Struggle to Get Food, Water to Haitians | Miscellaneous Videos says:
January 26, 2010 at 8:21 am

Compassionate, well-written piece that dispels the erroneous stereotypical view of Haitians as voodoo devil worshipers, but does so in a respectful, informative manner.

One little typo that got through spellcheck–it’s “bear” not “bare resentment” in the last paragraph.

Even though some minority groups may think different, the vast majority of the dominican people get along with our haitian neighbor, which was demonstrated when the earthquake struck earlier in this month and immediately all of the available resources were use to help Haiti, both by our goverment as by particular individuals, and as of today our hospitals are full of injured haitians and there are thousands of Dominican volunteers working in Port au Prince and other locations damaged by teh quake.

The PAT ROBERTSONIAN position indicated in your article is shared only by a very little minority mainly older uneducated people.

Actually, saying that haitians practice or are voodoo worshipers is not steriotype at all, that’s a fact. Also, dominicans don’t feel that haiti is part of the dominican republic or that haitians are our “brothers”, but that doesn’t mean we shouldn’t help them. It is part of our culture to help our neighbors.

That cheap labor is sure good, also the sugar cane.

i’m half Haitian and i have Dominican family members and friends, i grew up in the bronx, new york and all my friends were Dominican. we don’t practice voodoo we go to church every sunday. we speak spanish and french. my family is what would be considered the “Mulattoes” of Haiti. but the one thing that bothers me is that how can 2 different groups of people share the island and not get along/not like each other. if the Dominican Republic had an earthquake i would send money, food, and clothing to them as well. i feel like no matter what goes down,both countries should ALWAYS be there to support and love each other!