The city of Torreón 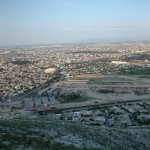 Top Story – A shootout in the northern Mexican city of Torreón that began in a shopping mall and continued onto a highway left eight people dead, including seven alleged drug cartel members and one policeman, The Associated Press reports.

Mexican federal agents Monday responded to an attempted kidnapping at the shopping mall, where they were met by gunfire allegedly from members of Los Zetas, a paramilitary group aligned with the Gulf Cartel.

The main shootout occurred after police and soldiers chased the alleged cartel members onto a nearby highway. One suspect, three policemen and two kidnap victims were also wounded.

The shootout occurred on the same day as the La Familia cartel strung banners in the western state of Michoacán urging citizens and other gangs to form a front against Los Zetas, and only two days after 16 people were killed in the border city of Ciudad Juárez.

Chile Votes On Whether to Rewrite Constitution

Panama Canal Authority Has Not Made Decision On Toll Increase

And how about a day after at least 10 people were killed in another shooting in Torreon.