A week after tens of thousands of immigrants converged on Washington’s National Mall to call for immigration reform, the latest proposals percolating in state legislatures are not what they had in mind.

Three proposals within the last week seek to toughen laws against immigrants and broaden local officers’ authority to arrest them. One even caught the attention of Department of Homeland Security Secretary Janet Napolitano.

In one proposed bill, Maryland is posed to be one of the first states in the nation to mandate 287(g), a program that deputizes state and local law enforcement to enforce immigration laws.

The Washington Examiner reports that the bill would require some state police to undergo the four-week training with the Immigration and Customs Enforcement (ICE).

According to the ICE Web site , 63 localities are actively engaged with 287(g), including 840 officers. This number has fluctuated throughout the years as some departments dropped and others joined. In the past, as many as 67 departments were involved.

Immigrant advocates say these programs encourage racial profiling. Proponents of 287(g) say it corrals criminal immigrants, contributing to a 40 percent increase in deportations so far this year, according to ICE.

Right now, the only department signed up in Maryland under 287(g) is the Frederick County Sheriff’s Office, which entered the program in February 2008.

In Georgia, the Atlanta Journal-Constitution reports that in one proposal passing the Senate last week, state and local governments will get a financial boost for turning over undocumented immigrants to the federal government.

Under the proposed bill, sponsored by state senator John Wiles (R-37), local governments would receive a 20 percent bonus for utilizing the 287(g) program and a 10 percent bonus when utilizing Secure Communities, a similar program which checks arrested people’s immigration status.

“Georgia welcomes anyone who wants to be a law-abiding citizen to make a better life for themselves and their family,” Wiles said in a press release. “For those who choose to break the law, they must suffer the consequences.”

The bill would only take effect “when funds are available to be appropriated.”

And in Arizona, where Maricopa County Sheriff Joe Arpaio has become one of the most controversial 287(g) figures for his roundups of immigrants, a proposal is circulating that would allow police to arrest undocumented immigrants on trespassing charges.

The New York Times reported last week that this would be a first for the nation, as the bill would outlaw hiring day laborers and prohibit people from knowingly transporting undocumented immigrants, including giving a ride to a family member.

On the international level, The New York Times reported last week that American officials will team up with Mexican federal police. The increased border patrol is an effort to combat the drug violence spilling across the border.

The advocates can take solace in at least one thing – administration officials say that reform is one of President Barack Obama’s pressing issues.

“We’re going to keep pushing this until we get it over the finish line,” Napolitano told an Arizona State University audience last week. She also criticized the proposed legislation in her home state, saying such laws “take away the ability of law enforcement in different communities to set their own priorities.”

This post was corrected on April 1, 2010. An earlier version incorrectly said that Maryland was the first state to mandate 287(g). 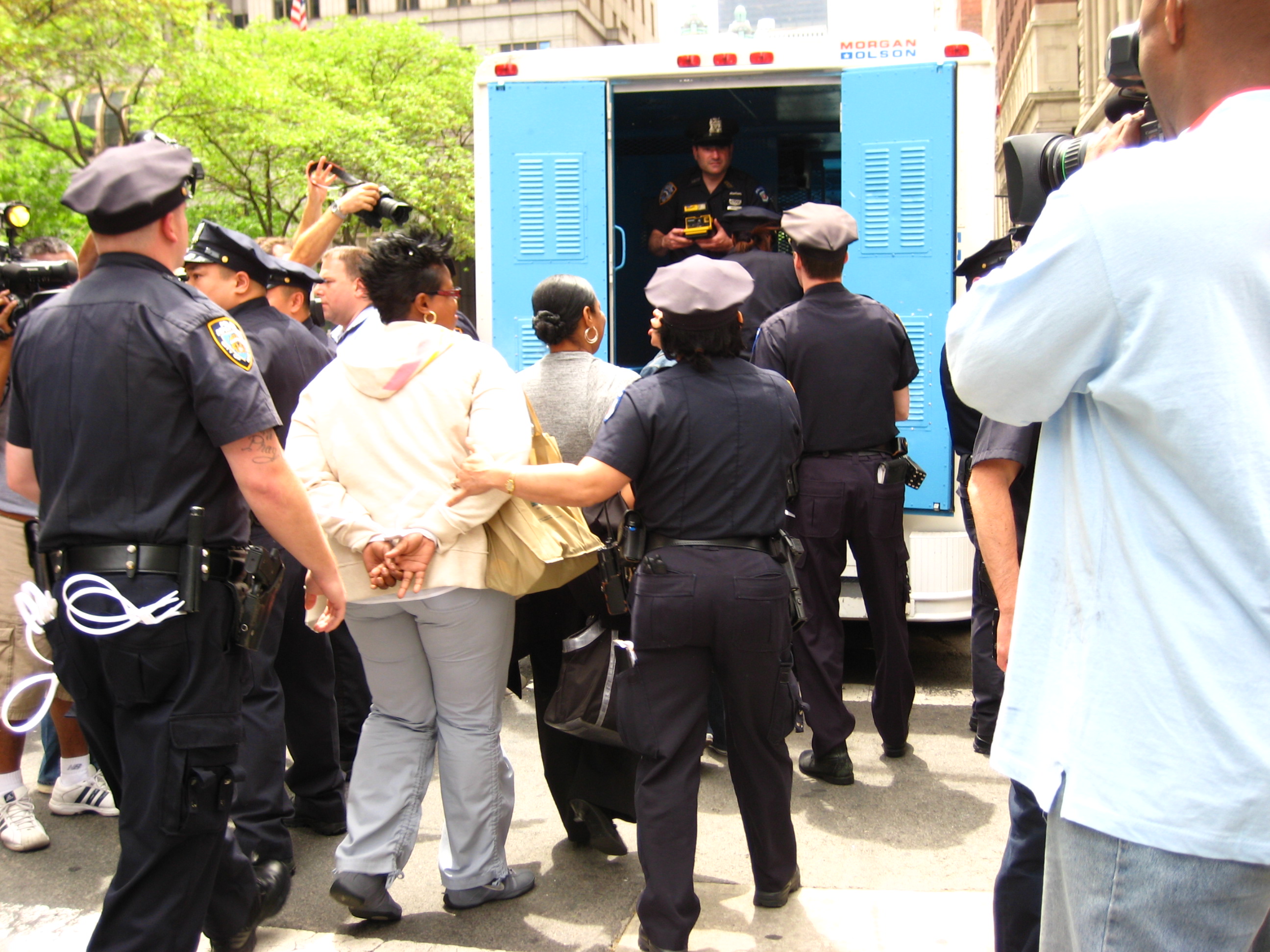 They are illegal! What about about illegal don’t you understand?? It means they are not supposed to be in the country. Period. End of discussion. Save your sob stories for someone who cares.

These activists need to open their eyes. If amnesty is pushed the Democrats will be out of power and there is nothing they love more than power. They will keep paying lip service but until the unemployment numbers go down they will not move. This way thay can say “hey we tried” wink wink.

Any politician who would support an amnesty for millions of uneducated, unskilled third-world sponges while we are experiencing the worst recession and highest unemployment rates in decades should be immediately recalled or impeached, including that knuckle-dragging Marxist NWO puppet in the White House.

Illegal aliens are criminals and parasites, one and all. Their very presence here and practically everything they do on U.S. soil is illegal. They need to be ferreted out, rounded up like cattle, punished for their numerous crimes, then booted back to whence they snuck in from with such extreme prejudice that they will never, ever think of violating our sovereignty again. Enough is enough.

[…] We’re pleased to announce that Alison Bowen has launched a blog called “Beyond Borders” for the Dispatch, where she will cover immigration. Have a look at the first installment, “Tougher Bills Emerge for Immigration Enforcement.” […]

With the aid and approval of our own government the sense of entitlement that illegal aliens feel grows daily. Authorities do absolutely nothing when they invade and colonize, when they march in the streets waving the flags of their corrupt countries, demand benefits, compete with Americans for job, drain our welfare system, leave mountains of trash in their wake, commit numerous crimes, have anchor babies, etc. The list goes on. How I wish we still had the greatest generation around. They would fix this situation in a short time. Now we have whiners who say they can’t deport 12 million illegals. How about 20-30 million? No one says why we can’t deport them. The will isn’t there. Illegal immigration is far too profitable in money and votes. Disgusting!

“Audience members said they’re afraid their mixed-race children.”
————
Just who were these audience members? “Hispanics”. Hispanic and Latino are NOT races but ethnicities. Races cannot be changed; ethnicity can. Hispanics may be and are of ANY race. For that matter, the richest man in the world is a so-called Hispanic, but he’s the son of Arab immigrants to Mexico.

Any Representative that votes for AMNESTY is obviously not working for
their constituents.
They are traitors and should be arrested for crimes against the citizens of
the United States.
Thank you for allowing the murder of an Arizona Rancher last week.
His blood is on your hands.

When the elections come around this November, please do NOT vote for any candidate who supports giving an amnesty to illegal alien lawbreakers and criminals.

Now, wait a minute here. Did the New York Times check with Mayor Bloomberg about this move? Immigration concerns Mayor Mike afterall. He said that if illegal alien foreign nationals are deported, “who will take care of the golf courses in New York?” I only bring this up to demonstrate how normally rational, even insanely rich people like Mayor Mike, completely lose their heads when it comes to pandering and advocating for illegal foreign nationals. My God, if only the Mayor, Charles Schumer, and hundreds of other policiticians across the U.S. would advocate for Americans. It would be a cold day in hell before they did that. How many times do they have to demonstrate their utter contempt for the citizenry of this country.

Its getting very close to outright violence in some citys due to the crimes many illegals are commiting,people are sick and tired of this massive wave of people unregulated coming into our communitys.
And for anyone to even suggest an amnesty is out of their mind,there isnt almost a day goes by that i dont read about a rape,murder,home invasion by illegal aliens.
These poloticians better start getting tough,cause if this economy keeps as it is and the illegals keep doing what they are doing,rest assured we might see some things that we have only seen overseas in Bosnia and such places.

Help ICE get the job done. Go to this website and report all businesses in your area that are hiring illegal aliens. From this site you can generate a report to both ICE and the IRS.

The illegals are always demanding rights from America. Why didn’t they demand these rights in Mexico? Mexico is a wealthy country. They could have created decent paying jobs for their people. Instead their corrupt politicians/leaders lived a lavish lifestyle while their people lived in poverty. They even let Americans have businesses there and pay their people slaves wages. Do you think they did not charge the American businesses to do this. Again they sold out their people. They should be ashamed to show their faces.