A police officer in Kingston, where the authorities have hunted for alleged drug lord Christopher "Dudus" Coke this week. 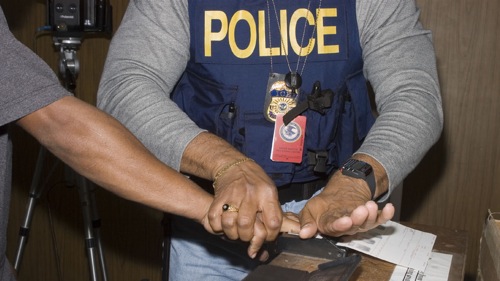 An Immigration and Customs Enforcement officer takes a suspects fingerprints.

Asking the government to strictly refocus the program toward catching criminals, the group reports that almost half of those arrested are not the violent criminal immigrants thought to pose the most risk to the public.

La Raza reported that most of the 173,000 “potentially removable aliens” arrested since January 2006 were not violent criminals or terrorists.

Instead, immigrants were detained for broken taillights, lacking documentation or “conspiracy to smuggle oneself.”

The group concludes concludes that 287(g) is ineffective, misusing federal authority while hindering local police’s ability to maintain the trust of the community.

In 2009, John Morton, assistant secretary for ICE, argued in an editorial to The New York Times that 287(g) was a successful program that had been revamped with stricter benchmarks and requiring a “focus solely on criminal aliens.”

But La Raza’s report highlights cases in which immigrants were arrested for minor violations, sometimes with dire consequences.

Juana Villegas was nine months pregnant when she was pulled over in Tennessee. Her water broke in jail, and she was shackled to her hospital bed while in labor with her daughter, who developed jaundice.

In another situation, three children were stranded for eight hours on the side of a North Carolina road after their mother was detained for driving without a license.

The Government Accountability Office (GAO) evaluated 287(g), saying it should focus on “strenuous criminal activity.” In March, the Office of Inspector General, part of the Department of Homeland Security, issued 33 recommendations, including improving officer guidance, and added oversight, training and data collection.

Maricopa County Sheriff Joe Arpaio is a prominent player in this program, where his Arizona office has fielded 2,200 lawsuits.

Arpaio’s officers routinely round up thousands of illegal immigrants, catching them in sweeps and sending them to Immigration and Customs Enforcement (ICE).

In 2009, Richard M. Stana, the director of Homeland Security and Justice Issues, who helped form the GAO report, told the House of Representative’s Committee on Homeland Security that if every locality did this, ICE wouldn’t be able to handle the increase of required deportations.

According to the Center for Immigration Studies, as of October 2009, 73 agencies were participating in 287(g), including about 1,000 law enforcement officers. More than 81,000 “illegal or criminal aliens” were charged with immigration violations between January 2006 and November 2008.

Enough is enough! Legal U.S citizens unite! Help take the steps to save our country take our jobs back and stop this illegal immigrant invasion. Support our cause before illegal immigrant criminals have more rights than us. This is our last stand! If other online articles report unemployment is around 20% and there are 310 million in the U.S census reports. Then there is as many as 62 million people in the U.S that are unemployed & are able to work full-time. Do we have to reach 150 million unemployed before we take action? Also we must take steps to lower local city and state councilmen salaries too they are all robbing & hurting the people they serve. So please read and sign this online petition. “Petition to Reduce the Wages of Congress Men and Women from $174,000 per year to $50,000 per year at “change.org’. ” Link is below!

Do we really care what this anti-American organization and others like it think? They want to try to turn the US into a failed corrupf, violent mess like we have across our southenr border. They don’t ever demand that their own leaders take care of the people. They have this sense of entitlement about our country and want to bring in the poverty-stricken, uneducated masses to form a sociaiist society, dependent on governmenr for their every need. We will never allow a foreign entity to take our country. We need the greatest generation back instead of the politically correct weaklings we have in Washington now. They’d get every illegal alien out of here along with their supporters.

In every instance they cited above, the ILLEGAL ALIEN was committing a CRIME on top of being here ILLEGALLY, but they want people to look the other way because they are Latinos, and therefore the laws should not apply to them like it does to others. What a crock.

La Raza is a joke. They complain when the feds enforce immigration laws, they complain when states/municipalities apply for 287g programs, they complain about SB1070, they complain about raids, they complain when states enforce their own laws only when ILLEGAL ALIENS are involved. Then they have the nerve to claim that they want the laws ‘enforced’, but only if it is being applied to people other than Latinos. This is the most racist organization on the face of the planet, ranking right alongside the KKK. The only difference is that La Raza is funded by our tax dollars. They bring bogus lawsuits along with threats of bogus lawsuits to intimidate others into giving them what they want. We need to demand that our representatives defund La Raza right along with ACORN, MECHA, MAPA, CASA DE MARYLAND, ETC. AD NAUSEAM. These are all ‘non profits’, and they are precluded from becoming involved in politics by IRS regulations, yet they are always lobbying for this, that or the other. Time for the IRS to start making some major audits. They should be able to reduce our taxes with the amount of fines and penalties they could get from these organizations before they revoke their charters.

Wouldn’t it be nice if Latin America would leave the U.S. alone?
We are sick of you here in the U.S.

La Raza is no more an activist group as much as they are a terrorist group. I’ve listened to many tapes and speeches from La Raza about the taking over America as ancient god given land to the mexicans stolen by white Americans.

La Raza, MECHA are racist hate mongering groups that only furthers the divide between our countries, let us secure the borders, end this mistake of anchor babies, deport the invaders out of the USA now!

When politicians like Pelosi and Obama and until recently McCain taking the side of foreign countries and their people over the American people something is wrong. I agree with the above comment, who cares about La Raza? What are their real motives? Obviously they care more about their home country than America. This is a problem we are going to face by allowing uncontrolled immigration, both legal and illegal. With the communication we have today it is harder for immigrants to assimilate into our society, because it is easy to stay immersed to a degree in their own. We need to slow down immigration. We need to be selective, we need to be wise I do not think we need to add 1 million people a year from other countries. And with our current social welfare system we definitely do not need to take in 12-20 million people who are minimum wage earners. I will pay the extra 20-50 cents for my fruits and vegetables to save myself $1300 dollars in taxes and give an unemployed American citizen a job they can make a living on.