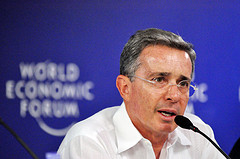 Top Story — Four police officers and one soldier, kidnapped by Colombia’s FARC guerrillas, called on the government to make a deal with the left-wing rebel group to secure their release.

Their plea was broadcast over a video released to local media. The video indicates that the hostages are still alive, although the actual recording date of the video is unknown.

The men in the recording have all been held hostage by the FARC since the late 1990s. They called on Colombian President Álvaro Uribe and presidential candidates Juan Manuel Santos and Antanas Mockus to negotiate with the group.

“I want to tell President Álvaro Uribe and presidential candidates Juan Manuel Santos, Antanas Mockus and the rest that negotiation with insurgent groups should make an end to kidnappings,” said Jose Libio Martínez, according to Reuters.

Martínez was captured by the FARC along with Pablo Emilio Moncayo, who was freed earlier this year. Martínez also sent a message to his son, who was born after he was taken hostage by the FARC.

It is not clear yet if the FARC plans to release these men, but in March after Moncayo was freed the group said that he was the last one who would be freed unconditionally.

The release of this video comes only a day after the Colombian military announced that it killed six FARC rebels in an air strike and only a few weeks before a runoff election to decide the country’s next president.