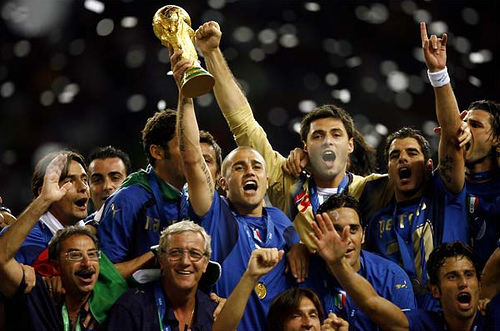 The 2010 World Cup starts Today in South Africa with the inaugural match between the host country South Africa and a strong Mexican team. The Latin America News Dispatch hopes readers were informed by our World Cup Preview and that they enjoy the next few weeks of World Cup action. Below is a schedule* of the matches this upcoming weekend as well as our staff’s picks to win La Copa Mundial.

Roque Planas (General Manager): Paraguay. Paraguay has struggled lately, but they played impressively during qualifying rounds, collecting 10 wins and taking down South American titans Argentina and Brazil. With their star player Salvador Cabañas still recovering from a gunshot wound to the head, Paraguay faces a significant handicap, and few expect them to get past the quarter-finals. All the same, I’ve got a feeling they may emerge from the shadows and surprise people. Plus, it’s hard for me not to get behind a team whose star’s name is also Roque (Santa Cruz).

Andrew O’Reilly (Editor-in-Chief): Argentina. While I planned to pick Spain (due to the team’s ridiculous roster), I decided to go with Argentina for Latin American solidarity. Also I’d like to see Messi prove his detractors wrong and, if Maradona doesn’t do anything absurd, Argentina has one of the best squads in the tournament with the likes of Maxi Rodríguez, Diego Milito Walter Samuel and Carlos Tevez.

Mari Hayman (Staff Writer): Uruguay. Why? Porque soy celeste!  Admittedly, Uruguay has been a longshot for about five decades now, but this underdog wedged between the great Latin American soccer superpowers has won two historic World Cup victories and is overdue for another.

Rachel Brooks-Ames (Staff Writer): Brazil. I don’t care if some people don’t like the more mechanical style of play under Dunga. Kaká and the rest of the team have learned to play more efficiently over in Europe and Brazil is looking good.

Mike Samras (Staff Writer): Spain.  Spain’s emergence as a global powerhouse over the past several years (current EUFA European Champions) puts the team puts them in a good position to reach the finals and leaves an overall win (which would be Spain’s first) a real possibility.

Paola Reyes (Staff Writer): Mexico. Although it might be more of a aspiration that a prediction, it is about time that Mexico takes the World Cup!

Joel Richards (Contributor): Spain. Assuming there are no windows to throw the form book out of, the roja should lift the World Cup on July 11th. They have two candidates for the golden boot in Fernando Torres and David Villa, one of the three best keepers in the world in Iker Casillas, a steady and strong back line and the world’s best midfelder – Xavi Hernández. Winning Euro 2008 helped them shrug off the ‘perennial underachievers’ title, and they will never have a better squad, or chance, with which to win the World Cup.

Julio Salgado (Contributor): Mexico. I must say, I’m not an avid soccer fan. Or any sport for that matter. But if I had to see this through a nationalist lens, I will be cheering for “El Tri” aka Mexico. Other than that, I don’t have any other explanation behind my choice.