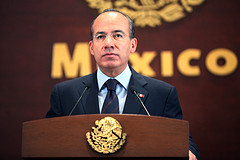 President Felipe Calderón asked the Mexican people to support his administration's fight against organized crime at a press conference on Tuesday.

Top Story — Mexico plans to hold elections Sunday in 12 of the country’s states, despite recent threats and attacks on politicians by drug cartels including one on Monday that left a leading gubernatorial candidate dead.

Rodolfo Torre Cantú, 46, was killed along with at least four supporters when gunmen opened fire on his motorcade, which was on its way to a campaign event.

“Democracy in Tamaulipas is a value that must protect, and in our hands lies the responsibility to protect the right to vote that people have,” said Jorge Luis Navarro, the chairman of Tamaulipas’ state election institute, according to El Financiero.

Mexican President Felipe Calderón echoed Navarro’s statements during a televised message on Tuesday. Calderón asked the Mexican people to stand with his government and help fight the powerful drug cartels.

“Today has proven that organized crime is a permanent threat and that we should close ranks to confront it and prevent it from repeating acts such as the cowardly assassination that shocked the country today,” Calderón said, according to the Christian Science Monitor.

However, throughout Mexico there is a growing feeling that the drug cartels are yielding more influence over the country’s affairs.

“Organized crime has voted,” the national newspaper Reforma wrote in a front-page editorial Tuesday, according to the Miami Herald, and just last month the mayor of the resort town of Cancún was arrested on charges of drug trafficking and money laundering.

“The cartels don’t seek a failed state. Rather they want ‘dual sovereignty’ – that is, to pay off public officials in return for their closing their eyes to criminality,” said George W. Grayson, a Mexico counternarcotics expert, according to the Christian Science Monitor.