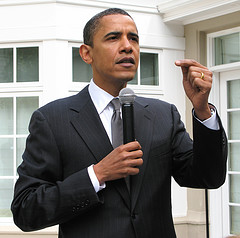 The announcement follows a week in which the president huddled with immigration activists and met Hispanic political leaders.

His speech isn’t expected to unveil new policy or bring strong implications beyond building coalitions and reiterating his commitment to reform.

The speech, slotted at American University’s School of International Service, also will not likely address the federal review of Arizona’s pending law, the Washington Post reported.

The president’s schedule this week has been dotted with meetings where he’s heard immigration concerns. Monday afternoon, the president met with immigration activists.

“We raised our concerns about the urgently needed reforms to the harsh and draconian detention and deportation mechanisms that are tearing apart families and communities under his watch,” Ali Noorani, executive director of the National Immigration Forum, said after the meeting.

According to the White House, Obama pushed the grassroots activists for a bipartisan effort. He’s repeatedly pressured immigration activists to find Republican sponsors for a bill.

“And the word secure really becomes, effectively, ‘seal’ the border,” she told the crowd, according to the AP.

“What we heard wasn’t anything what we hoped to hear,” Brewer said after a meeting with Obama.

Hope for passing a comprehensive immigration bill this year remain dim. Other issues like climate legislation threaten to derail any movement, along with both sides’ strong emotions. Last week, Illinois Representative Luis Gutierrez said the Democrats are still lacking support needed to move a bill, The Hill reported.

Brewer, who’s clashed with the president after signing a bill requiring everyone in her state to show proof of citizenship, isn’t the only one trying to take immigration enforcement into their own state’s hands.

According to the mayor’s office, the group will work with Congress and the White House, suggesting ways to secure borers and use technology to hamper illegal immigration.