Protesters demand the release of hostages held by the FARC in a march in Bogotá, Colombia on Feb. 4, 2008. 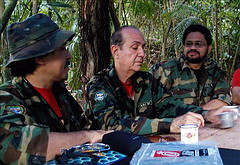 An image presented by the Colombian government to the OAS of FARC guerrillas known as "Iván Márquez" and "Jesús Santrich," allegedly meeting in Venezuela with honorary president of the Continental Bolivarian Movement Narcisco Isa Conde.

Top Story — The Venezuelan government cut diplomatic ties with neighboring Colombia Thursday, as the dispute between the two countries escalated.

Venezuelan President Hugo Chávez made the annoucement shortly after Colombia accused Venzuela of harboring 1,500 Colombian guerillas, during a meeting of the Organization of American States in Washington D.C.

“We have no other choice but, out of dignity, to totally break our relations with our brother nation of Colombia,” Chávez said, according to Reuters.

Luis Alfonso Hoyos, the Colombian ambassador to the OAS, presented videos, maps and photos to support the claim FARC and ELN rebels have bases in Venezuela and said the material was clear evidence that Venezuela is sheltering rebels.

OAS Secretary-General Jose Miguel Insulza said that the regional body could not mount an inspection mission into Venezuela without the government’s consent.

Venezuela closed its embassy in Bogotá and gave the mission 72 hours to leave.

Tension between the two countries has been palpable as Chávez and outgoing Colombian President Álvaro Uribe have been involved in a war of words for the last few years.

Colombian President-elect Juan Manuel Santos declined to comment to the press regarding the dispute during a visit to Mexico.

Powerful children playing grown-up games. Scary. Hard to say which one of these arrogant leaders is worse.

[…] weeks ago, the Uribe administration presented evidence to the Organization of American States that it said confirme…. In response, the Venezuelan government broke off diplomatic relations and sent troops to the […]

[…] cut diplomatic relations with Colombia in July 2010, when the Colombian government accused Venezuela before the Organization of American […]