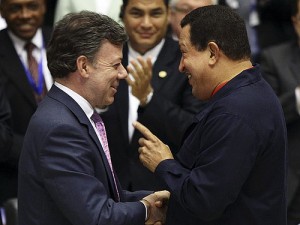 The report by the London-based International Institute for Strategic Studies (IISS), “The FARC Files: Venezuela, Ecuador and the Secret Archive of  ’Raúl Reyes’”, reported that the Venezuelan government permitted the FARC to operate within its borders, funded the FARC’s office in Caracas, and provided material assistance for FARC operatives through the Venezuelan intelligence service DISIP.  The IISS said that President of Ecuador Rafael Correa accepted almost $400,000 from the FARC and its allies during his 2006 presidential campaign, although the IISS also reported that it found no further evidence of ties between the FARC and the Ecuadorian government after March 2008.

According to a statement on the IISS website, the think tank spent over two years studying the content of eight data storage devices belonging to Luis Edgar Devía Silva (aka Raúl Reyes), the head of the FARC’s International Committee (COMINTER), after the Colombian army seized the disks and other documents in a March 2008 raid on a FARC encampment in Ecuador. Officials from Colombia’s Ministry of Defense reportedly asked the IISS to independently review the data after confirming through Interpol that the documents had not been manipulated.

Devía Silva and at least sixteen others were killed in the Colombian military’s bombardment of his camp on March 1, 2008, during the administration of former Colombian President Alvaro Uribe.

According to the IISS report, Devía Silva’s computer archive “offers tantalising but ultimately unproven suggestions that FARC may have undertaken assassinations of Chávez’s political opponents on behalf of the Venezuelan state.” Although Devía Silva reportedly met with President Chávez in September 2000 to discuss a loan for weapons purchases, the report says there is no evidence that Chávez was himself aware of assassination requests.

Chávez “failed to deliver fully on promises of financial and material assistance” to the FARC, according to Nigel Inkster, Director for Transnational Threats and Political Risk at the IISS. “Chávez played his relationship with the guerrillas long, calculating that they needed him more than he them; and he was not averse to acting against FARC’s interests when he judged it expedient,” Inkster said.

On Monday, the Venezuelan Embassy in Britain disavowed the findings of the IISS. A statement released by the embassy said there are “basic inaccuracies” in the data on which the report is based, and that information secured from Devía Silva’s computers in 2008 is not admissible in Colombian courts. It cited a 2008 forensic report from Interpol that determined that the documents retrieved by the Colombian military do “not conform to internationally recognised principles for the ordinary handling of electronic evidence by law enforcement.”

“This could become part of an aggressive propaganda tool against Venezuela to undermine progress in the region, precisely at a time when relations between Venezuela and Colombia have reached a level of stable cooperation and friendly dialogue,” said a statement by the Venezuelan Embassy on Monday.

Venezuela cut diplomatic relations with Colombia in July 2010, when the Colombian government accused Venezuela before the Organization of American States of harboring leftist rebels in its territory. Relations were restored three weeks later after Chávez pledged to keep guerrillas out of Venezuela.

Anti-Drug Spraying in Colombia May Cause Cancer

This kind of report dont said the true about the problem between all those countries, Colombia, Venezuela and Ecuador, and was writed by some Colombian point of view who dont remember when all this things started and the true reason behind, i am not agree what you put the name of the President of Ecuador Correa, many things could be manipulate… think about it

Please be more careful when researching your articles. Take a look at the following Guardian article, which debunks the majority of the claims stated here:

This is totally fraudulent data that was modified by the Colombian government. Nobody is taking it seriously other than the corporate media.

[…] in recent days, after London-based think tank International Institute for Strategic Studies published a book-length study based on the seized documents. Following the publication of the book, the Ecuadoran attorney […]