These photographs were taken on an 852-mile, 72-hour trip across the Southwest border, from San Diego, California to Arizona and back. Many citizens from the United States and Mexico have never seen the line that divides and defines their countries, marked by walls, barbed wire fences, U.S. Border Patrol checks and, increasingly, controversy.

Click the first image to begin viewing the photo essay. 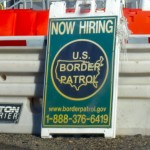 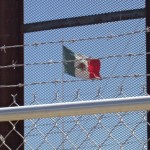 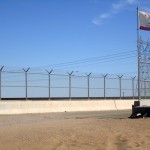 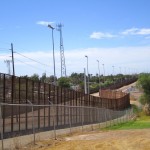 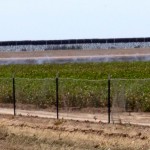 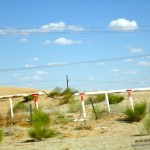 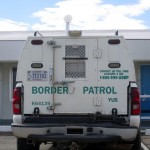 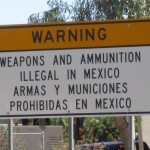 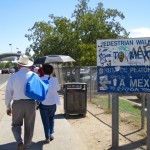 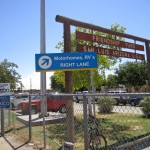 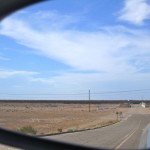 2. The Mexican flag as seen through the U.S.-Mexico border fence in San Luis, Arizona.

3. The U.S.-Mexico border just inside California and just outside Yuma, AZ and Ciudad Morelos, Mexico.

4. A BP vehicle cruises along triple and double lines of defense at the border in San Luis. The border stretches into the desert towards California.

5. A field in San Luis, AZ runs up to the U.S.-Mexico border. Farms and ranches in California and Arizona contain parts of the national boundary.

6. A line of defense just off the highway at the Imperial Sand Dunes, CA. The border is within view for much of 8 East, the major CA-AZ highway.

8. A sign at the border in San Luis warns against bringing arms into Mexico. U.S. Attorney Dennis Burke says that arms trafficking to Mexico is a major problem.

9. Foot traffic across the border in San Luis. Many such people live “sin fronteras,” working, shopping and visiting family on both sides.

10. “Friendship Park,” on the border between Mexico and Arizona, a state whose immigration policies have led to widespread protests, especially from its 30 percent Hispanic population.

11. Driving away, with the border in the background.

Colombian Hitmen Arrested in Spain; Suspected To Be Part of La Negra Group

[…] Molly O’Toole shares some images from her recent 852-mile, 72-hour trip across the Southwest border, from San Diego, California to Arizona and back in this photo essay. […]

Stark images, devoid of any beauty, clearly depicting the artificial and unnecessary ways in which we create separation between countries, cultures and people.

[…] Molly O’Toole shares some images from her recent 852-mile, 72-hour trip across the Southwest border, from San Diego, California to Arizona and back in this photo essay. […]