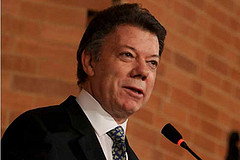 Top Story — The Colombian military killed 22 left-wing guerrillas Sunday during an offensive that involved an aerial raid and ground troops near the country’s border with Ecuador, according to the Colombian authorities.

“Up to now, 22 narcoterrorists have been killed,” Rivera said in a phone call to President Juan Manuel Santos made public to local media, according to AFP.

The attack occurred in the Putumayo region close to the town San Miguel, where eight policemen died earlier this month in a FARC attack.

Colombian President Juan Manuel Santos praised the operation and said the military strike was “the biggest blow in recent times” to the FARC, according to The BBC.

Santos, who before being inaugurated said he was open to talks with the country’s left-wig rebels, has continued the hardline policy of his predecessor, Álvaro Uribe, in dealing with the FARC.

The FARC have stepped up their attacks since Santos’ inauguration, killing 40 security officers so far this month in a series of rebel attacks that some analysts say are intended to force the government into peace talks.

“This shows the country, but above all those bandits, that our people are not under their control, but to the contrary, responding with incisiveness,” President Juan Manuel Santos said in a phone conversation with Rivera, according to CNN.