A view of Nuevo Laredo from the Texas border. 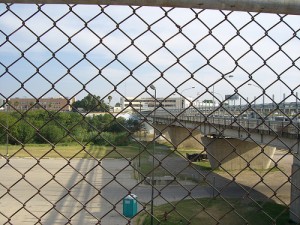 A view of Nuevo Laredo from the Texas border.

The bloodied bodies of a man and a woman were found hanging from a bridge in the northeast Mexican border town of Nuevo Laredo Tuesday, along with two posters left nearby warning social media users about reporting on the drug war.

Bloggers who write about Mexico’s ongoing drug war have been threatened in the past, but this is believed to be the first time that users of social media sites such as Twitter and Facebook have been targeted by the cartels. The posters also called out by name two blogs that report on drug violence, Al Rojo Vivo and Blog del Narco.

“That will happen to all of them,” read the text on one of the posters. It was signed with the letter “Z”, which is usually associated with the Zetas drug cartel.

The Zetas, the former paramilitary-wing of the Gulf Cartel that broke free to form its own group, maintains a strong presence in the northeastern state of Tamaulipas, where Nuevo Laredo is situated.

Police in the region are keeping quiet about Tuesday’s incident and information from the scene came from what a reporter witnessed himself. Commuters on Tuesday morning saw the bodies of the two victims hanging from the bridge, with the body of the woman hanging by her hands and feet in a “U” shape.

Along with politicians and law enforcement, journalists and now social media users have been under attack for covering incidents involving Mexico’s drug cartels. In many parts of the country , especially in the north, media outlets have implemented a self-imposed blackout of coverage of the drug war.

After the recent killing of two female journalists, over 500 media workers took to the streets of Mexico City to demand thorough investigations into the killing of journalists and greater protection from the federal government.

In its annual report, Freedom House’s Freedom of the Press Survey said that Mexico took one of the biggest slides in press freedom in the world this year.

The Committee to Protect Journalists (CPJ) also stated that Mexico is one of the most dangerous places on the planet for journalists and asked the President Felipe Calderón to do more to protect media workers.

“President Calderón and the Mexican federal government need to do more—much more—to defend the media and create an environment in which journalists can do their jobs with some degree of safety,” wrote Joel Simon, executive director of the CPJ. “Safeguarding press freedom is in his own strategic interest. He cannot win the drug war if he cedes control of public information to the narcos.”

The new threat to social media users also puts in jeopardy one of the few ways people in Mexico can obtain news about the drug war. Since the self-imposed media blackout, many citizens often rely on social networks for information about shootouts or other drug violence.

However the use of sites like Twitter and Facebook have also caused controversy recently, after two residents of the city of Vercruz caused a panic by reporting on a false rumor of a shooting at a local school. The two were later arrested and accused of acts of “terrorism.”

“The battle for the free flow of information in Mexico has reached a crucial phase,” Simon wrote.

[…] Read more at the Huffington Post and the Latin America News Dispatch. […]