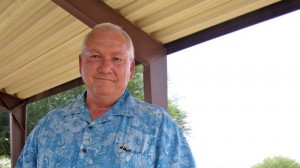 MESA, Arizona — Primary election day found Senator Russell Pearce with droplets of sweat rolling down his forehead behind his orange, round-rimmed sunglasses. He tried to rub them away from his eyes like someone waking up from an afternoon nap.

Pearce wasn’t sweating because of the political pressure; he would go on to win his uncontested and long-held Arizona seat with 96.56 percent of the vote.

Nor was Pearce sweating out of fear, alone as we were in “Park of the Canals” in Mesa, Arizona (the “Canals” are dry beds with brush), roughly 180 miles from the Arizona-Mexico border, whose increasing violence, he claims, is spilling over into Americans’ backyards.

“You’d think it was the 1800s. They hear noises at night … they pray for daylight,” said Pearce of Arizona’s ranchers, who live and work on the border. “Because these are really bad guys coming across that border.”

Pearce was sweating because it gets hot in Arizona.

This isn’t news to Arizonans, and neither is a heated political climate, nor the issues generating heat.

Yet, though the elections held just over a month ago on Aug. 24 in Arizona were primaries, many watched with an eye towards the coming general elections and the ever-referenced Congressional midterm elections in November.

Journalists and politicians alike have begun to call Arizona the “Ground Zero” of the Great Immigration Debate. The southwestern state shares 389 miles of the 1,969-mile  border with Mexico. Of its more than 6.5 million population, over 30 percent is Hispanic. Only one-third of Arizona’s Hispanics are foreign-born, but over 90 percent are of Mexican origin, according to the Pew Hispanic Center.

Today, many say that tensions in Arizona have become reflective, and potentially predictive, of the national mood.

According to Pearce, whose own face grew redder as he sarcastically drew out syllables and punchily punctuated phrases like “illegal aliens” and “medicating, educating, and incarcerating” — America’s collective temper is rising.

Pearce was born and raised in Mesa, where we now sat on opposite sides of a metal picnic bench in the shade, trying vainly to evade the 111-degree heat.

“I sold mistletoe and the Mesa Tribune on Main Street of this little, tiny town,” Pearce said of his own origins, holding a Big Gulp to match his oversize Green Durango parked behind him. He chuckled to himself with a gravelly “heh, heh.”

Pearce was largely unknown outside the state until recently, when controversy over the nation’s toughest immigration law, SB1070, which he authored, pushed him into the spotlight. He claims he never wanted to make a career of politics.

“I like putting the bad guys in jail. I’m very vigilant, always have been. I never intended to run for office,” Pearce, a long-time law enforcement officer, said. “I never expected to be the icon on these issues from coast to coast,” he added. “But when you do certain things, all of a sudden it becomes a national story.”

But Pearce was critical of what he called “bandwagoning” on the part of politicians in Arizona and Washington, though he said he believed the public would speak through the results of the day’s elections.

“It’s hard to beat people who spend over 20 million dollars to maintain their seat as they deceive you,” Pearce said, in a subtle swipe at former presidential candidate and newly-reelected Sen. John McCain, who is reported to have spent an unprecedented $20 million to defend his seat — safe for now, with 56 percent of the vote. “It’s difficult when politicians who have never worked with us on this issue all of a sudden after 27 years have found the border. Soon as the election’s over they’ll forget where that border’s at, I can almost guarantee ’ya.”

But now, “Even they can’t run from the issues,” Pearce said. “They’re forced to take a position.”

Pearce’s claim of seniority is accurate; he has served in the state senate for almost a decade. For nearly as long he has been drafting and initiating legislation, much of it aimed at restricting undocumented immigrants, and not without success.

In 2004, Pearce claimed that then-Governor Janet Napolitano tried to block what he described as provisions against voter fraud, though the bill eventually passed.

“I mean good grief, you have to show two forms of ID to get a Blockbuster movie, I thought maybe voting oughta be on the same par,” Pearce commented.

In 2006, four related ballot initiatives, including English as an official language and no in-state tuition or daycare for unauthorized migrants, passed with over 70 percent of Arizona voters. But bills akin to the controversial SB 1070 have been rejected every year since 2005.

The governor was Jan Brewer, who, though a Republican, became head of the state in accordance with Arizona law when former Governor Janet Napolitano, a Democrat, left to join the Obama administration as Homeland Security Secretary.

Brewer has gained notoriety for signing SB 1070 into law — hardly hurtful to her campaign for Governor; she handily won the Republican primary to face democratic Attorney General Terry Goddard with 80.92 percent of the vote. But it was Pearce who introduced, sponsored, and authored the bill, seeking legal advice to make it watertight.

“You know the left is gonna sue you, they don’t want any of the laws enforced,” said Pearce. “This isn’t about preemption, this is about open-border-anarchist groups, who simply refuse to support America, the citizens of this country, and recognize their sovereignty and the rights of United States citizens to have our laws enforced.”

Currently more than 20 states are pursuing legislation similar to SB1070. Most recently, Pearce gave a personal tour of the border fence to legislators from Utah, who are drafting their own bill.

In answer to claims that SB 1070 would necessitate racial profiling and that some of Arizona’s political heavyweights, such as Brewer and Pearce himself, are using the flood of attention on their state to stir up anti-Hispanic sentiment in the region, Pearce gave what would one of his most common answers in the half-hour interview before a camera crew came to the park and took over:

“I don’t expect some of these folks to have a high I.Q. or pay attention to reality,” he said. “We have put safeguards in this law that the federal law does. Not. Have.” Pearce noted that federal law does not require lawful contact before questioning, whereas the version of SB1070 he initiated does.

The ACLU argues, however, that the section requiring lawful contact requires all local enforcement to investigate a person’s immigration status regardless of whether that person is suspected of a crime. (The section reads “Requires police officers to make a reasonable attempt to determine the immigration status of a person whenever there is reasonable suspicion that the person is unlawfully present.”)

“We went the extra mile in here,” Pearce continued, adding that it was “demeaning to law enforcement to think that they’re out lookin’ to stop people just because how they look.”

The day before SB1070 went into effect several months ago on July 29, federal judge Susan Bolton blocked the more controversial sections of the law, such as those that granted police the power to question and demand paper-proof of people who they have a “reasonable suspicion” are unauthorized immigrants, while the federal suit proceeds.

“Arizona didn’t make illegal illegal. Illegal was already illegal,” says Pearce. “I know that’s hard for folks in Washington D.C. to understand. Not even sure they can spell the word illegal. That’s why there’s gonna be a change this November. We’re sick and tired of politicians who ignore the damage to America.”

This article is the first in a three-part series examining the immigration debate in Arizona. See part two here and part three here.

[…] has taken center stage in the national debate about immigration as the midterm elections approach. Molly O’Toole reports from Arizona in a three-part […]

[…] reports from the FBI and Customs and Border Protection (CBP), the violence in the border regions described by Pearce, along with the general homicide rate for the state, have in reality both […]

[…] reports from the FBI and Customs and Border Protection (CBP), the violence in the border regions described by Pearce, along with the general homicide rate for the state, have in reality both […]