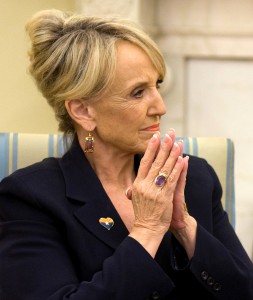 Top Story — A federal appeals court on Monday said that Arizona may be permitted to require police officers to check the immigration status of suspected criminals, even though they would be powerless do anything about a person’s illegal residency.

The U.S. 9th Circuit Court of Appeals looked at four provisions in Arizona’s controversial immigration bill, SB1070, that was ruled unconstitutional back in July by  a federal judge in Phoenix.

During the hour-long proceedings in San Francisco, the three-judge appeals panel seemed to agree with the lower court’s previous rulings, but indicated that it would authorize police the right to check the immigration status of people they reasonably suspected of being in the U.S. illegally.

This would also still allow suspects to be referred to federal authorities for deportation.

Arizona Governor Jan Brewer and her group of lawyers defended the state’s bill Monday, saying that she will take the matter to the Supreme Court if necessary.

“There’s no reason why Arizona should stand by and suffer the consequences of a broken system, when (it) has 15,000 well-trained peace officers that Washington authorities aren’t allowing to help fix the system. That’s what Arizona wants to do,” said attorney John Bouma, who is representing Arizona, according to Reuters.

Senior 9th Circuit Judge John Noonan asked during the hearing if there was anyway the bill could be tailored so that its enactment was constitutionally sound and he also took issue with part of the law barring work by immigrants while their immigrations status was being determined.

“We are bound by that decision. End of argument,” Noonan said, according to Reuters.

We are a country that is ruled by the Constitution (with all Amendments), and the Declaration of Independence, not by the majority of the day. When the uneducated do not know the principles in these documents, therein lays the problem in losing, so no one should be surprised when the dullards lose in court after being smartly challenged.

Last month of October 2010, our Ninth Circuit Court of Appeals overturned Arizona’s requirement that people show proof of citizenship to register to vote or the 2004, “Prop. 200”. In the month of July 2010, our U.S. Federal courts have found the so called State of Arizona hate filled legislation namely “House Bill 2013″ and “SB1070″ Un-constitution (So much for the intellect of Jan Brewer, “Did you read the bills you signed?”). But we all know that they will go crying to the Supreme Court of the United States, please, please, please go. We will fight you in Arizona, any other state, and yes in Washington DC. We will not tire, we will not be silent and we will persevere, I promise you.

In my opinion the Republican Party has been taken over the most extreme of clans; the Baggers, Birthers and Blowhards (people who love to push their beliefs and hate on others while trying to take away the rights of those they just hate) and that’s who they need to extract from their party if they real want to win in November. Good Luck, because as they said in WACO, “We Ain’t Coming Out”.

I hope that every American, regardless of where he lives, will stop and examine his conscience about this and other related incidents. This Nation was founded by men of many nations and backgrounds. It was founded on the principle that all men are created equal, and that the rights of every man are diminished when the rights of one man are threatened. All of us ought to have the right to be treated as he would wish to be treated, as one would wish his children to be treated, but this is not the case.

Today we are committed to a worldwide struggle to promote and protect the rights of all who wish to be free. In a time of domestic crisis men of good will and generosity should be able to unite regardless of party or politics and do what is right, not what is just popular with the majority. Some men comprehend discrimination by never have experiencing it in their lives, but the majority will only understand after it happens to them.

[…] The ruling is the first of its kind in the United States, which has recently seen a series of high-profile battles about state immigration policies including one over Arizona’s strict immigration law. […]