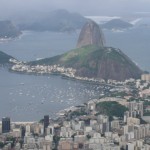 Top Story — Rio de Janeiro’s former commander of police has been accused of leaking information about the arrest of 30 cops, The Associated Press reports.

The federal police accuse Allan Turnowski of telling at least one of the 30 officers arrested that an investigation had been initiated against Rio’s police. Turnowski could face two years in prison if formally charged and convicted. He denies the allegations.

Turnowski resigned from his post Tuesday, following the arrest of a ring of allegedly corrupt cops who face accusations of selling guns to drug dealers, participating in paramilitary activites and providing illegal private security. Turnowski’s second-in-command, Carlos Oliveira, is accused of taking bribes from drug traffickers in exchange for information, Reuters reports.

The controversy surrounding Brazil’s police comes as Brazil is trying to ramp up security and root out corruption in preparation for the 2014 World Cup and the 2016 Olympics, both of which will be held in Rio de Janeiro.