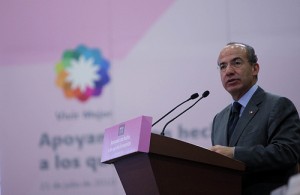 Authorities in Mexico discovered 32 more bodies this past week dumped in pits in the northeastern state of Tamaulipas. The most recent findings bring the body count up to 177 this month in Tamaulipas alone.

Graves have been found in the nearby states of Durango and Nuevo León, as well as the northwestern states of Sonora and Sinaloa, where so far this month authorities have found 68 bodies.

The discovery of this large number of bodies has prompted marches by angry citizens and a call by Roman Catholic Cardinal Norberto Rivera to end the “demented” levels of violence in the country. Mexico’s attorney general’s office has also offered a 15 million peso reward for information leading to the arrest of those responsible for planning and carrying out the killings.

As forensic teams sift through the graves, they have discovered that very few of the murders were committed with guns. Most of the bodies show signs of blunt force trauma and authorities found a sledgehammer on scene, which they believe was used in the killings.

It is also alleged that at least 122 people found in the pits were dragged off of buses when drug cartels set up road blocks in the area, which lays just 90 minutes south of the U.S. state of Texas.

The surge in violence in Tamaulipas is linked to an on-going war between the Gulf cartel and the Zetas drug gang, a former paramilitary wing of the Gulf cartel who broke away from their former bosses in 2010. The violence throughout Mexico led the U.S. State Department Friday to issue a travel warning to U.S. citizens, advising them on against any non-essential travel.

“You should defer non-essential travel to the state of Tamaulipas,” The State Department statement said. “While no highway routes through Tamaulipas are considered safe, many of the crimes reported to the U.S. Consulate General in Matamoros took place along the Matamoros-Tampico highway, particularly around San Fernando and the area north of Tampico.”

The violence and high body-count also have some experts calling Mexico, or at the least Tamaulipas and certain parts of northern Mexico, a failed state.

“It is one of the places where clearly state, federal and local authorities are not in control,” said Eric Olson, a security expert at the Woodrow Wilson International Center in Washington. “It’s tragic, it’s unfortunate, but it’s a reality.”

Since 2006, when Mexican President Felipe Calderón began the military battle against organized crime with $1.6 billion in U.S. support, 35,000 people have been killed and thousands more disappeared.

Prohibition has permanently scarred our national character as well as our individual psyches. Our national policies and cultural practices have become pervaded by the fascistic, prohibitionist mind-set which has turned our domestic police force into a bunch of paramilitary thugs who often commit extra-judicial beatings and executions while running roughshod over our rights in order to “protect us from ourselves”.

When we eventually manage to put the horrors of this toxic moronothon behind us, we’ll need to engage in some very deep and honest soul-searching as to what we want to be as a nation. Many of our freedoms have been severely circumscribed or lost altogether, our economy has been trashed and our international reputation for being “free and fair” has been dragged through a putrid sewer by vicious narrow-minded drug warrior zealots who are ignorant of abstract concepts such as truth, justice and decency. We’ll need to make sure that such a catastrophe is never ever repeated. This may mean that public hearings or tribunals will be held where those who have been the instigators and cheerleaders of this abomination will have to answer for their serious crimes against our once prosperous and proud nation.

Each day you remain silent, you help to destroy the Constitution, fill the prisons with our children, and empower terrorists and criminals worldwide while wasting hundreds of billions of your own tax dollars. Prohibition bears many strong and startling similarities to Torquemada­’s inquisition­, it’s supporters are servants of tyranny and hate who’s sole purpose is to make the rest of us suffer their putrid legacy of incalculable waste and destruction.

Prohibition engendered black market profits are obscenely huge. Remove this and you remove the ability to bribe or threaten any government official or even whole governments. The argument that legalized regulation won’t severely cripple organized crime is truly bizarre. Of course, the bad guys won’t just disappear, but if you severely diminish their income, you also severely diminish their power. The proceeds from theft, extortion, pirated goods etc. are a drop in the ocean compared to what can be earned by selling prohibited/unregulated drugs in a black market estimated to be worth 400,000 million dollars. Without the lure and power of so much easy capital, it’s also very unlikely that new criminal enterprises will ever fill the void left by those you successfully disrupt or entirely eradicate.

Millions of fearless North Africans have recently shown us that recognizing oppression also carries the weight of responsibility to act upon and oppose that oppression. Prohibition is a vicious anti-constitutional assault on ALL American citizens by a criminally insane and dysfunctional government, which left unchallenged will end with the destruction of the entire nation.

“I see in the near future a crisis approaching that unnerves me and causes me to tremble for the safety of my country… Corporations have been enthroned, an era of corruption in high places will follow, and the money-power of the country will endeavor to prolong its reign by working upon the prejudices of the people until the wealth is aggregated in a few hands and the Republic is destroyed.”
– Abraham Lincoln, November 12, 1864

“Whenever any form of government becomes destructive of these ends [life, liberty, and the pursuit of happiness] it is the right of the people to alter or abolish it, and to institute new government…”
– The Declaration of Independence July 4, 1776

It really sucks when big pharma and fascist corporations hijack your republic!

The drug czar’s office is not only unnecessary but also the greatest waste of space since vows of fidelity were included in the christian marriage service.

[…] 2006, when Mexican President Felipe Calderón began the military battle against organized crime almost 40,000 people have been killed and thousands more […]

[…] 2006, when Mexican President Felipe Caldern began a troops conflict opposite orderly crime roughly 40,000 people have been killed and thousands some-more […]