A view of a favela in Rio de Janeiro. Photo by semtext. 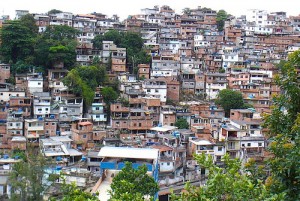 A view of a favela in Rio de Janeiro. Photo by semtext.

Google has come under fire in Brazil for prominently featuring the names of favelas on the Internet giant’s online map service, Google Maps.  An editorial by O Globo called Google’s labeling of neighborhoods in Rio de Janeiro an example of “distorted geography” and faulted the company for privileging the names of certain favelas over some nearby middle and upper middle-class neighborhoods.

An online view of Rio’s South Zone, often promoted as the  heart of Rio and home to famous landmarks like Copacabana and Ipanema, accurately shows that the city’s wealthiest neighborhoods exist side-by-side with favelas that are home to Rio’s poorest residents. But the fact that touristic neighborhoods like Cosme Velho do not appear on the map without using the “zoom” function  has made some residents angry — especially in light of the fact that neighboring Vila Imaculada Conceição, a favela, is clearly labeled.

Some Cariocas are concerned that foreigners will have a misconception about their city based on the maps. Laura Antunes, who authored the O Globo editiorial, writes, “Those unfamiliar with Rio who want to discover more about the city using these maps will have the false impression that the urban area is nothing more than an agglomeration of favelas.” She referred to a map available on the Rio de Janeiro municipal government website put out by the IPP (Instituto Pereira Passos) as a more accurate version of the city, breaking Rio down into both neighborhoods and administrative districts that include favelas.

Valéria Sampaio, a resident of Humaitá, said the maps would cause visitors to Rio to “take fright”. She added, “At the very least, the names of the favelas could appear in a smaller size so the user could perceive the difference in importance.”

But importance is subjective. Rocinha, Rio de Janeiro’s largest favela, is also not visible on Google Maps at certain resolutions. In 2001, residents of Rio’s favelas sought to address a lack of knowledge about their communities by creating “Viva Favela”, an online forum for community journalism dedicated to reporting on daily life in the city’s favelas and teaching residents new media skills. The website partnered with Google Maps to create an interactive map allowing users to access content coming directly from the city’s favelas.

The latest controversy over Rio’s neighborhoods is not the first time Google Maps has drawn heat from a Latin American nation.

In November of 2010, Nicaraguan troops crossed the border into Costa Rica, took down the neighboring country’s flag, and hoisted their own, drawing outrage from Costa Ricans including President Laura Chinchilla. The troops’ commander later blamed the blunder on an inaccurate reading from Google Maps, which had incorrectly listed the territory as Nicaraguan. Google later took responsibility for the error, acknowledging that its depiction of the Nicaragua-Costa Rica border was off by 2.7 kilometers.

Also in 2010, Google Street View generated criticism just a week after its Brazilian debut, when dead bodies and criminal activity were visible to those viewing the streets of Rio de Janeiro and Belo Horizonte online. Brazil was the first country in South America to receive Google Street View service, which allows users to zoom in on aerial photographs of select geographic locations.

Regarding the controversial labeling of Rio neighborhoods and favelas, a spokesman for Google said that the company is working “to treat this information in a more efficient way”.