Ecuador, This Week in Latin America 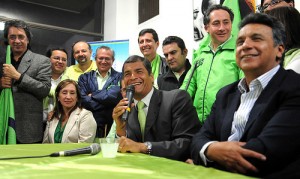 Top Story — President Rafael Correa of Ecuador claimed victory in a referendum on a number of government and social reforms Saturday, paving the way for what critics say is an attempt to grab hold of more power.

An early count showed that Ecuadorians backed Correa on all ten of the referendum’s questions, which included everything from a ban on bullfighting to media and judicial reforms. Analysts claim that the victory will be a huge boost for Ecuador’s president.

“Today, we made an important step toward peace, democracy and a new motherland,” Correa said as the first results came in. “[The opposition has] been saying it’s totalitarian… [a word] used for a state in which things are done by force. We’re doing this democratically.”

Ecuadorians voted on a wide variety of somewhat unrelated issues in the referendum, including restricting media ownership, outlawing casino gambling, and prohibiting the killing animals for entertainment.

The restriction of media ownership and the proposed changes to Ecuador’s judiciary have drawn criticism from Correa’s opponents and outsiders alike.

Correa’s relationship with the media had already drawn international attention. Last month, the Inter-American Commission on Human Rights (IACHR) issued a statement condemning Correa for suing the newspaper El Universo for slander and asking for a $50 million fine along with three years in jail as punishments. The newspaper used the word “dictator” several times to describe Correa in a March column.

Critics of the judiciary reforms argue Correa gains too much influence in the appointment of judges because the executive branch would now have a stronger voice in selecting members of the temporary and permanent councils.

“If the question of restructuring the judicial system is approved, the only chance the opposition will have is to set aside their differences and appeal to the masses in a unified front—much like Correa did when coming to power in 2006 and as he continues to do now,” Edward Remache wrote in Americas Quarterly.

Guatemalan Courts To Close After Rise In COVID-19 Infections