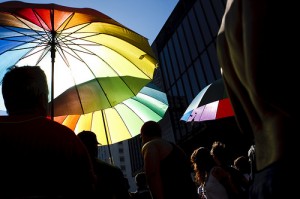 In a two-day session over same-sex unions, The Brazilian Supreme Court on Thursday overwhelming voted to extend the same rights and duties to same-sex couples as those that exist for heterosexual couples in Brazil.

“There is nothing more intimate and private for individuals than the practice of their sexuality,” Minister Carlos Ayres Britto remarked Wednesday, adding that gay unions are not prohibited in Brazilian law and should thus be permitted.

In determining that same-sex unions represent a “family entity” in Brazil with the same rights as heterosexual unions, Thursday’s ruling sets a precedent for gay couples to adopt children, leave or receive an inheritance from their partner, and include their partners and children as dependents on tax returns and health care plans.

Britto, who voted on Wednesday, was the first of Brazil’s ten supreme court justices to speak on the issue before the court adjourned Wednesday evening. In votes submitted during Thursday’s session, nine other justices joined Britto’s opinion, although one, Minister Ricardo Lewandowski, said that marriage — as opposed to civil unions — should be reserved exclusively for heterosexual couples.

The eleventh judge, José Antonio Dias Toffoli, abstained because of his personal involvement in the case.

The issue of legally recognizing same-sex unions came before the Brazilian Supreme Court in 2008 and again in 2009, when governor Sérgio Cabral petitioned to end the distinction between gay and heterosexual couples in the Civil Code and Statute on Civil Servants, for the benefit of public employees in same-sex relationships. In 2009, the office of the Attorney General of Brazil asked the Supreme Court to recognize same-sex couples as a “family entity”.

Same-sex relationships have become increasingly accepted in Brazilian culture, although the issue is widely debated and is opposed by the local Roman Catholic Church. On Wednesday, the same day that the Supreme Court began its deliberations on same-sex unions, the television drama “Amor e Revolução” (“Love and Revolution”) announced that it would broadcast the first onscreen kiss between a lesbian couple ever to be seen on a Brazilian soap opera. Last week, however, the Brazil’s Globo TV also cut a scene from the Simpsons showing two male characters kissing.

Elsewhere in Latin America, acceptance of same-sex unions is steadily growing. On July 15, 2010, Argentina became the first nation in Latin America to legalize same-sex marriage at the federal level, joining the Netherlands, Belgium, Spain, Canada, South Africa, Norway, Sweden, Portugal and Iceland. Currently, same-sex unions are permitted in Uruguay, Colombia, the Brazilian state of Rio Grande do Sul, the Mexican state of Coahuila, and Mexico City. In honor of the International Day Against Homophobia on May 17, Cuba’s National Center of Sex Education (CENESEX) announced that it would sponsor a month-long series of debates, conferences, film screenings and performances to promote sexual diversity with other social organizations.

Treasurer of Workers’ Party is Latest Charged in Petrobas Scandal