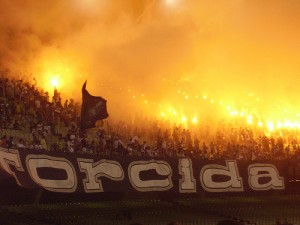 The Order of Brazilian Lawyers (OAB) has filed a racial discrimination complaint against a pair of Brazilian soccer fans for posting derogatory messages on Twitter after Flamengo was eliminated from the Brazil Cup by northeastern team Ceará on Wednesday night.

The comments ridiculing Brazilians from the northeast angered Brazilians across the country and attracted the attention of the OAB in the northeastern state of Ceará, which on Thursday asked the Federal Public Ministry to investigate the Twitter users for discrimination and injury.

“Those dark-skinned, savage, Indian Northeasterners think that they’re so great, a bunch of ugly people. It’s not for nothing that I don’t like that race,” wrote a Twitter user who identified herself as Amanda Régis.

“I only came on Twitter to say how much Northeasterners are the disgrace of Brazil,” a Twitter user identified as Lucian Farah wrote, alongside a string of other unprintable epithets.

Northeastern Brazil is one of the poorest regions in Brazil and is home to many Afro-Brazilians.

“The Federal Constitution treats everyone as an equal, without distinctions of any nature. We cannot permit a person with a certain degree of knowledge to use the Internet to disseminate racism,” said Valdetário Andrade Monteiro, President of the OAB in Ceará. In Brazil, racism is a crime subject to fines and prison time.

Wednesday’s tweets unleashed a flood of criticism on Twitter as commenters accused both Régis and Farah of xenophobia and racism. According to the Folha do São Paulo, the tweets were among the top ten most commented topics on Twitter in Brazil on Thursday morning, and made the list of worldwide “trending topics”.

“My god, people. I acted on impulse for Flamengo, I don’t have anything against Northeasterners. Sorry, everybody, I never should have done that,” Régis tweeted.

Régis and Farah have since deleted their Twitter accounts.

Racism kills. It isn’t only unkind, it is a brutal psychological assault. There are consequences to these kinds of statements: they kill people a little more each time and are associated with increased levels of suicide, disease, psychological illness, and crime violent which is a reaction to racism.

Racism is everywhere and within us. I pray my sons will not witness its ugly face.