The city of Tuxtla Gutiérrez in Chiapas, Mexico. 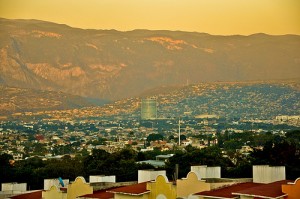 The city of Tuxtla Gutiérrez in Chiapas, Mexico.

Chiapas state police found the largest group of migrants in recent years by using X-ray equipment on the trucks at a checkpoint in the outskirts of city of Tuxtla Gutiérrez. Police arrested four people accused of smuggling the undocumented migrants as they attempted to flee the scene.

“It is the largest rescue of migrants traveling in inhuman conditions,” said a spokesman from the attorney general’s office to AFP.

The migrants, who were allegedly being smuggled to the United States, included women and children. 410 of the migrants were from Guatemala, 47 from El Salvador, 32 from Ecuador, 12 from India, six from Nepal, three from China and one each from Japan.

It is believed that the migrants paid $7,000 per person to the alleged traffickers to take them into the US.

According to official figures some 300,000 undocumented migrants, mostly from Central America, cross Mexico’s 620 mile border with Guatemala and Belize every year. At least 11,300 migrants were kidnapped in Mexico from April to September 2010, according to the most recent report from the country’s independent National Human Rights Commission (CNDH, in Spanish).

Central American Immigrants Rest In Northern Mexico On Their Journey To The United States (Photo Essay) | Latin America News Dispatch says:
May 24, 2011 at 10:20 am

[…] Mexico — Every year an estimated 300,000 migrants — mostly from Central America — cross Mexico’s southern border on their way to the […]

[…] discovery comes on the heels of a similar incident in May when Mexican officials found 513 migrants inside a two tractor trailers in Chiapas. Using X-ray equipment, Chiapas state authorities discovered the migrants who hailed from Central […]