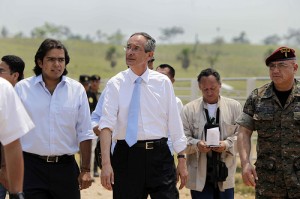 Top Story — Guatemalan President Álvaro Colom announced Wednesday the arrest of an alleged Zeta leader and former Guatemalan soldier in connection with the killing of cattle ranch workers on Saturday.

Hugo Álvaro Gómez Vásquez, also known as “the Witch”, was arrested on a triple murder charge related to the mass killings in Petén. He is accused of kidnapping and killing three people related to the owner of the farm where the bodies were found, but investigators refrained from saying if he was directly linked to the people killed on the farm.

Gómez Vásquez is a former member of Guatemala’s Kaibiles, a group of specialized soldiers trained in counterinsurgency tactics. He also allegedly has a strong relationship with the Zetas drug cartel, who are very active in the northern departments of Guatemala that border Mexico.

Saturday’s mass murder, which President Colom called “sadistic and perverse”, left 27 people dead in the town of Caserío La Bomba in the northern department (province) of Petén. The killers decapitated several victims and left their body parts strewn across the area.

Guatemalan authorities sent eight teams into the field to attempt to shed light on the murders, which is one of the nation’s worst since the end of the civil war in 1996.

Gómez Vásquez was taken by helicopter to Petén’s capital of Alta Verapaz under heavy security. He has denied the charges brought against him.

“They are accusing me of many things … but I’m a farmer. I’m from Petén,” he said during in a brief statement to the media.

Breaking News: A commercial airplane traveling from Neuquén to Comodoro Rivadavia, Argentina, crashed on Wednesday, killing all 22 people on board. The Saab 340 plane belonged to Sol Airlines, which posted a statement to its Web site Wednesday night saying that the company did not yet have any information about the cause of the crash.