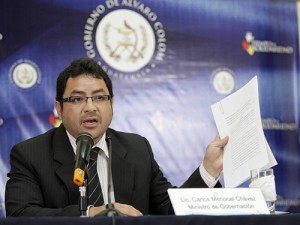 Top Story — Guatemalan officials on Monday attributed Saturday’s massacre of 29 people in the northern province of Petén to the Zetas, a Mexican drug cartel also thought to be responsible for the mass grave of 183 people in the Mexican state of Tamaulipas found last month.

However, as details emerge on the motives behind the violent murders of a group of day laborers at Los Cocos estate, the facts remain uncertain. Police have also speculated that the murders may have been in retaliation for the Saturday death of Haroldo Waldemar León of the Leones gang, which operates in Petén. It is still not known why the laborers were targeted.

“We have established that the victims were farmers with no links to drug traffic or organized crime,” Guatemalan Interior Minister Carlos Menocal told Guatemalan radio.

Luis Armando Garcia, 23, who survived the massacre by lying in a field and pretending to be dead, said a large group of men armed with machetes promised they would return. He said that two children were among those killed.

The killers reportedly arrived in pickup trucks and Hummers, numbering between 30 and 40 people, and made camp on the outskirts of the estate just before the murders. A message written in blood at the ranch said the killers were looking for ranch owner Otto Salguero, last seen on Sunday attending the funeral of his murdered niece. Salguero is now under investigation, according to Menocal.

Guatemalan President Alvaro Colom flew to Petén on Monday to condemn the killings. Last December, the president declared a two-month state of siege in the province of Alta Verapaz, arguing that it was necessary to combat drug cartels in the area. The declaration raised concerns that the police could abuse their added power and might be linked to the drug gangs themselves.

Last Friday, private security officers reportedly fired on a group of farmers from helicopters in Alta Verapaz. The farmers had been driven from their land by national security forces and private security guards on March 15 and were looking for for food.

Bolivian ex-President will stand trial for massacre in US Court